This article is full of links that don't go anywhere.

And it's giving everyone a headache. Please link to some less existence-challenged articles. If this page is not fixed in 30 days, it may become a candidate for deletion. 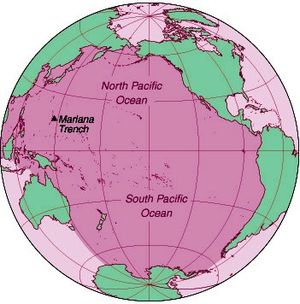 The Pacific Ocean is pinkish in colour because of the large red herring population.

The Pacific Ocean. A sea. Rumored to be the home of the fabled sunken city of Atlantis. Home of the mysterious Pacific triangle were boats and Oscar Wilde's wallet disappear regularly. It is the only Ocean that turns yellow and green at night. It is what cheap schools use to fill their water fountains.

It is also where the magical Michael O'kennedy pees his pants and that is how I was born.

The Pacific Ocean is a large body of salt water with islands, underwater volcanoes and rampant wild dogs swimming in it. It averages 4 miles deep and is thousands of miles wide. Do you all have any idea how much frigging water that is? It's 187 quintillion gallons, which means if a person drank three 12-ounce glass of Pacific Ocean water every day, they would probably die of salt water poisoning within a few hours, by the way, there is Bermuda Triangle.

The Pacific Ocean is the largest ocean during the months of April through September due to the monsoon season and menstruation.

The Pacific Ocean should not be confused with the Specific Ocean.

It contains about 10 million trillion bazillion islands, although most are found in the Great Barrier Reef.

It is a tidal ocean, so it gets your whites white, and keeps your colors bright!

Waves can reach 10 miles in height.

The ocean was discovered and named by Starfleet explorer and Captain James T. Kirk in 2263 who attempted to have sex with it, but nearly drowned.

Kirk named it the Pacific Ocean because most of the countries found in it are pacifist nations. The pacifist nature of Pacific nations was demonstrated when New Zealand told the good old USA to take their warships and their "can neither confirm nor deny nuclear weapons" statements and push off.

Non-pacifist activities are found within its borders but are usually attributed to interlopers and non-residents.

One example is the French testing nuclear devices at Moruroa Atoll and the bombing of the Greenpeace boat the Rainbow Warrior.

Another example of non-pacifist activity was when the Hawaiians clubbed Captain James Cook to death on the beach. And then sold his man horn to a passing Chinese junk for use as an aphrodisiac in the imperial Chinese court.

Islands so minor, that you need a microscope to see them on the map[edit]

The Pacific Ocean has many types of seaweed and sea grass. There is a large range of fish ranging from tiny coral reef fish to large sharks and octopi. It is believed that the Loch Ness Monster spends its holidays in the Pacific Ocean but this has not been confirmed.