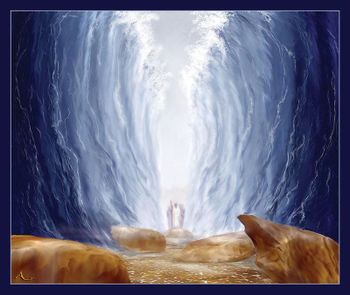 You know that you have accomplished your goal if the Red Sea looks like this.

So there you are in the middle of the wilderness, standing next to the Red Sea, when it occurs to you that you would rather be on the other side of the Red Sea. Sure, you could walk around, but that could take days or even weeks and you don't want to be in the Middle East for that long. So whatever your reason for needing to get to the other side, whether it be your boat left without you, Pharaoh's armies are hunting you down, or you're just really, really bored, these simple steps should help you create a nice little walkway to get across it in a fraction of the time. 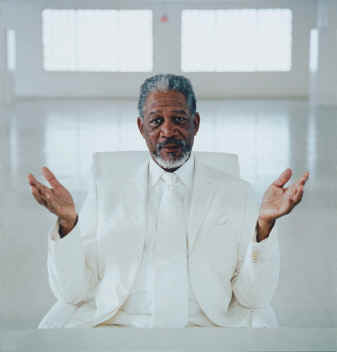 Sometimes god may find you in the form of Morgan Freeman.

This first step can be a wee bit tricky, as no one's quite sure where he is or even if he is. If he does exist, then it's more likely he's on the other side of the universe playing celestial golf and drinking ambrosia; and still way too pissed off about various things to care about your problems right now. Many people, upon hearing how difficult this could be, just quit immediately and decide that they'd rather walk around the Red Sea. If your idea of a fun time is getting blown up by crazy Middle-Easterners or hit by off-target U.S. missiles, then go right ahead and burn this guide and begin your arduous trek.

The suggested way to attempt to reach the head honcho of the universe is to try him on his cellphone. You may find the notion odd, but many modern day scholars and theologists have proven that God has a cellphone. Most people would think that a cellphone would not work in that area, but when you're dialing to a higher plane their cell towers will always pick up your signal. As no one knows the number of God, our advice is to call the number of the beast and ask him for God's number. Just dial 6-6-6 and press send, and you should have a discussion similar to the following:

Beast (sleepily): Who is this? (pause) Shit, did I miss Armageddon?

You: This is Jacob. And just out of interest, when was the Armageddon supposed to happen exactly?

Beast: What do you mean? God, Jesus, Joseph Smith, Buddha, Horus, and I were going to go see it together; but I think I overslept.

You: So you're talking about that movie with Bruce Willis and the asteroid where they attempt to try and stop it by--?

Beast (interrupting): Yes! Don't spoil it for me you twat!

You: I'm sorry it's just that the movie came out years ago. Anyway, the reason I called was to get God's cellphone number. Do you know it?

You: Thanks man, once I get home I'll let you borrow my copy of Armageddon if you want.

Now you just need to call up God with the given number (and you always wondered why 555 was a disallowed area code!) and ask him to help you. If he doesn't immediately send you through to voice-mail, and actually picks up, you may be in luck. If he has been drinking, you may be in very good luck. 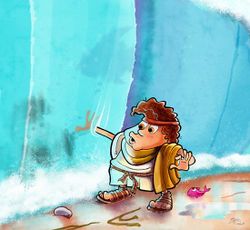 Unbeknown to Tommy, a shark is about to rip his arm clean off. This incident is a clear reminder that just because the seas are parted, it does not mean that the marine life is gone.

Second: Getting some Power

Now that you have him on the phone, you're going to have to convince him that you need his help. This can be anything from saying that you are trying to help an orphaned family of kittens find homes while solving world hunger and poverty, to just saying that you think he's very handsome and therefore should give you the power. If he agrees, then you're ready to proceed... almost.

He's going to want you to go and get a staff. Experts are still unsure as to why he feels that this requires a staff, but you are going to need one. Start searching around the arid wasteland until you find one, but DO NOT HANG UP. If you hang up on God, chances are you won't get back through.

After you manage to find a nice, staff-like hunk of wood, tell God that you are ready for the power to part the Red Sea. If he's still willing to grant it to you, you should see the staff turn into a vicious snake. After you're done having the shit scared out of you, God will laugh his ass off on the other end of the phone and turn the snake back into a staff.

After God has given you some handy-dandy power, just raise your staff and stretch your hand over the sea where you want it to part; it should part. If the water turns to blood or it starts hailing, call the service number on the side of the staff. (If nothing happens, see the Troubleshooting section below.) Provided that everything worked out correctly, a mighty blast of wind should push the waters back so you can walk across. If you happen to see a pillar of fire or clouds, it's just a side effect and should be ignored.

Tip:
When searching for a staff remember that it should be a wooden stick and not a group of working people.

If the above method didn't work, then it is first recommended that you check to make sure your "staff" is actually a staff. Having a two-by-four or a stump instead of an actual staff is a very common mistake amongst imbeciles, and is easily fixed. remember that a staff is a good deal longer than it is thick, and is rounded along the shaft.

If you are sure that you have an actual staff, and it's still not working then there may be one other thing you can do. God has shown a preference to Jews when it comes to performing this feat, so it's possible that converting will help.

If neither of the two fixes above work, then it is suggested you move onto the Alternate Method.

The first main part of the Alternate Method is to gather a large amount of fans.

Tip:
As with the staff, when obtaining fans don't mistake mechanical wind producing blowers for a group of people who like something.

It doesn't matter how big or how small, you just need a very large amount of them. A highly suggested way to gather them is create a bogus charity that claims to want to cool off overheated Middle-Eastern children. Be sure to get plenty of pictures of the kids looking sad, hungry, and overheated; because Americans can't resist that. Also be sure to ask for large amounts of money (under the false front of helping the kids, of course) to pay for the electricity you will use. After all, you wouldn't want the Red Sea to come crashing back down on you halfway across!

After you have enough fans to turn the formally worthless country of Lichtenstein into one large stockpile, you are ready to move on to the second part of the Alternate Method: setting up camp. You're going to want a small staff (people this time, not wood) to help you set this up, including: 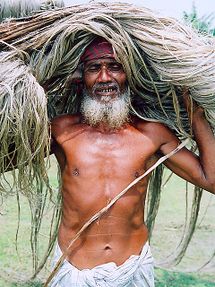 Locals who look like this are ideal for work, as they are poor enough that nobody will miss them if they have an accident.

Have the Grad Students start working on where your fans should be placed so that this method will actually work. If you do this correctly, you can make them work for "college credit" or a "thesis project" and won't have to pay them anything at all.

The electrician should be in charge of making sure all the fans are running and not causing overloads in the electrical system. He should have 2-3 of the Middle-Easterners working under him, so that should there be any electrical problems with the extremely large number of fans you brought in, they will be the ones to test the system to see if the problem is deadly or not. This is all done under the American-style logic that paying poor foreigners to do dangerous things is cheaper than taking real safety precautions.

The rest of the Middle-Easterners you hired should be watching out for anyone who might disrupt your fun serious feat of mankind's ingenuity. If they see someone, you should immediately try to hide all the fans amongst the flat, unadorned landscape and pretend that you are getting a drink from the sea. (NOTE: Do not actually drink from the Red Sea as you will take ill and die an agonizing death!)

If you are unable to hide the fans in time, make up some false bureaucratic agency and say that they commissioned you to do some experiment with fans and the Red Sea. (Example: "Yeah, we're part of the United Nations Department of Oceans, Seas, and Waterways; and we're out here checking the air-water-reflex of the Red Sea to compare it to national data in an attempt to improve the general air-water-reflex timing of all the planet's oceans, seas, and waterways for the purpose of....") If none of the preceding tactics work, bribe them or kill them just like a real government agency would.

The third and final part of the Alternate Method is the one you've been most waiting for. After you have everything set up, make sure to lash the corpses of all the "martyrs to the cause" together to form an emergency raft. Now signal to the electrician to signal a Middle-Easterner to turn on the power to the fans. If the guy is not fried, the fans turn on; and if the grad students calculated correctly, you should see the waters part. If this doesn't happen, go back to the second step and try again.

Now you want to slowly and cautiously walk across the path that has opened up while dragging your cadaver emergency-raft behind you. Should the waters come crashing down on you, jump on the raft and hope for the best. Otherwise, you should make it across the Red Sea without having to get the slightest bit wet! 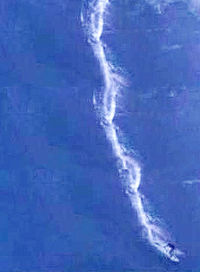 This ancient painting shows some enterprising Israelite taking advantage of the Red Sea "parting" phenomena as Moses marches the Jews to the other side.

If you've managed to successfully part and cross the red sea without the water collapsing back down upon you like a body-slam from Neptune himself, then there may be many other interesting prospects for the crossing you just made. Provided that it looks like it's going to stay parted for quite a while, you may be able to open it as an attraction. You might even be able to make some prophets from it.

Imagine a long stretch of sand that no one has ever seen before where an old gray-haired man and his wife walk along while two surfers, named Joshua and Aaron, are riding down the "walls" of the parting and shout "Hey Moses! Gnarly day, huh?" Children are running along, playing, and watching the highly confused marine life falling out of the water and onto the dry land that shouldn't be there. That sounds awesome, doesn't it? Well, what are you waiting for you lazy Anti-Semite? Get out there and make this vacation paradise happen!