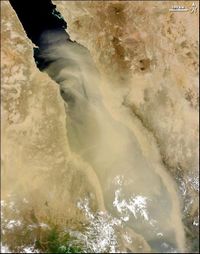 As this photo illustrates, most of the area around the Red Sea is actually quite brown.

The Red Sea is a seawater inlet of the Indian Ocean, lying between Africa and Asia. Contrary to popular belief, it is not actually red. Instead, it ranges from a light teal to a deep blue-ish color most of the year, though in its shallowest parts it has been known to approach total transparency. According to various local legends, the water has also been said to turn a putrid sand-brown color when dirtied, though this has yet to be substantiated by science.

For those without comedic tastes, the so-called experts at Wikipedia have an article about Red Sea.

The etymology of the place name “Red Sea” isn’t entirely clear, given that the sea itself isn’t actually red. Indeed, this term is made all the more confounding when the fact that the sand surrounding the Red Sea is actually quite brown, as are the people that live on the shores of the body of water.

One prominent theory is that “red” actually means “south”—in many Asiatic languages, the four cardinal directions are given names based on simple colors. This theory is actually quite compatible when one considers the names of the northernly “Black” Sea and the westernly “Mediterranean” Sea, with “Mediterranean” being a shade of green somewhere between ‘grape leaf’ and ‘olive.’

Another theory postulates that the Red Sea might have been so named after something within or near it that was red in color. Just what that thing is or was, however, has continued to elude history. 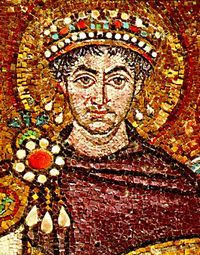 Byzantine Emperor Justinian I, seen here wearing Tyrian purple. As one can plainly seen, it looks sort of red.

Ancient History to the Middle Ages

The Biblical Book of Exodus tells the story of the Israelites’ miraculous crossing of a body of water, which the Hebrew text calls “Yam Suph.” Traditionally, “Yam Suph” is rendered as “Red Sea,” though it can also be translated as “Sea of Reeds,” which draws doubts as to whether or not the crossing of the Red Sea actually occurred at the Red Sea due to the fact that the Red Sea is notoriously reedless most of the year. Furthermore, the fact that the crossing of the Red Sea is mentioned in the Bible draws doubts as to whether or not it actually happened at all.[1]

From the 6th to 4th centuries BC, the Persians and Greeks explored and mapped the Red Sea. Though they were unable to locate the sea’s red namesake, they did manage to found many ports and establish several trade routes. These trade routes would later evolve to form the backbone of the Roman Empire’s trade with India, through which the Romans traded clothing that had been colored Tyrian purple[2] for pottery that was terracotta brown.

In the 4th century of the Common Era, the Western Roman Empire fell to the invading Celts, Goths, and Visigoths.[3] However, the Eastern Roman Empire managed to survive, and eventually became known as the Byzantine Empire. Throughout the following centuries, the Byzantines eventually spread their love of overly-complex litigious autocratic bureaucracy to the shores of the Red Sea, which would remain firmly in Byzantine hands until being forcibly taken by the invading Arabs in the second half of the seventh century.[4]

An oil tanker transits the Red Sea, carrying a load of American greenbacks on its deck back to port in Dubai.

Eventually, the Arabs, and later the Turks, conquered the Byzantine Empire, establishing the Ottoman Empire in its place. Throughout the following centuries, the Ottomans eventually spread their love of padded footstools often used as coordinating furniture to the shores of the Red Sea, which would remain firmly in Ottoman hands until being forcibly taken by the invading imperialist Europeans in the second half of the eighteenth century.[5]

In 1798, at the height of what would come to be called the Napoleonic Wars, then-general Napoleon Bonaparte invaded Egypt with the aim of wresting control of the Red Sea from the British. Though it was ultimately unsuccessful, Napoleon’s invasion of Egypt would eventually lead to both the foundation of modern Egyptology and the development of a pricey language tutoring software program.[6]

In 1869, the occupying British completed the Suez Canal, which linked the Red and Mediterranean seas. The Suez Canal would make Egypt and its neighboring mysteriously-named sea important strategic lynchpins for the British,[7] who would continue to occupy Egypt for almost a century afterward.

Today, the Red Sea handles large proportion of the world’s oil tanker traffic, with the bulk of that traffic transiting through the Suez Canal and eventually winding up in the United States. Every year, the United States spends billions of dollars—which are green[8]—to acquire oil—which is black—from the oil-producing states of the Persian Gulf. 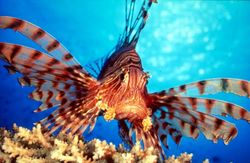 The Red Sea is home to 1200 species of fish that come in 978 distinct colors, 94 of which can be found on the lionfish.

The Red Sea is surrounded by the arid deserts of Egypt and the Arabian Peninsula, most of which is a sort of brownish color, though it can appear almost yellow in the right sunlight. The Red Sea’s uniquely warm and arid climate has proven ideal reef condition, as the shallowest bits of the sea contain some of the world’s most diverse and non-Australian coral reefs.[9] Indeed, much of the Red Sea is relatively shallow. However, at its deepest point the Red Sea reaches a depth of over 7,000 feet, the result of a very steep meridian trench that runs through the very middle of body of water, the very bottom of which appears as a very decidedly pitch black color because no sunlight reaches it.[10]

Because the Red Sea straddles the Indian Ocean and Mediterranean Sea, it is one of the world's most diverse marine ecosystems. The sea's aforementioned coral reefs provide a home for more than 1200 species of saltwater fish, including 42 species of deep water fish, 44 species of shark, and four species of flamboyantly gay lionfish.

The Red Sea is also one of the world’s most saline bodies of water, the result of the region’s high rate of evaporation and low amount of rainfall. As to be expected, salt from the Red Sea is not red.

Featured Article  (read another featured article)
Featured version: 20 July 2010
This article has been featured on the front page. — You can nominate your favourite articles at Uncyclopedia:VFH.