“*sniff* what would I do without the colour red? I wouldn't have a colour! But the Blues would still have the colour blue! Blue Dirtbags...”

~ Sarge talking about nothing that has to do with this article, but we had to put it here. All the bastard does is talk about red!

“He Looks better in red”

~ River Tam agrees that blood is a nice color

~ Communist on the color red

“Down with the ruddy red queen!”

Red is the colour of all colors, even though, it lost some popularity back in 1973 - the year Tom Cruise was born in. Red can also be used to symbolize good (i.e. Canada and its' flag, eh?) or to symbolize EVIL (i.e. the Nazis) Red people are them Indians or Native Americans. Their actually brown skinned, the word "Redskin" is only socially acceptable for an American football team, the Washington Redskins. Their main opponents are the Atlanta Negroes and the New York Jews. Today, the radical right wingers who hate communists, socialists and liberals use the color "red". Ever heard of the red states during presidential elections in the news media? The anti-commies adapted the same color to suit them. Isn't that ironic...dontcha think?

For those without comedic tastes, the so-called experts at Wikipedia have an article about Red.

Due to its relation with communism, (In Soviet Russia, red colors YOU!) Red is seen as a symbol of the Obama agenda. As it is also used at Disney for symbolizing evil corporations (closely related to Obama) it should be seen as bad. Also, as 1/3 of the flag of France is red, red can be associated with France (closely related to liberals, Commies, BAGEL!, jews, mothers, the French, and evil corporations). Therefore, red should be considered most unpleasant and should be avoided at all cost. Unless you're me. Or you're Cuban, German, etc. Then, you can have a ball celebrating your part in communism. You know why we're red? Because of the color of the certain liquid we spill (hint hint).Red has also been proven by a group of evil red leprechauns to make objects move at faster speeds. Red is a color thats turns you blind when you fuck red things. Also Fire Trucks are fucking red! 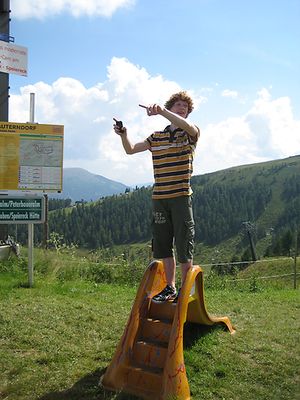 A tippical Red haired boy cursed to live with his RED HAIR!.

Unfortunately, the effect of country sun on skin is red discolouration on the neck. People infected with this are known as rednecks, and cannot survive in the city. There is no known cure. WARNING: Side effects include beer addiction, hunting addiction, need to live in mobile homes, intense need to bully or hate on members of the LGBQT+ community, hatred of black people, (sometimes uncontrollable) urge to have sex with cousins, and poverty. There are many more side effects, but we do not want to overload the Uncyclopedia server with (more) useless drivel.

It is also widely accepted that colourblind people can only see in red and shades of red, such as yellow, blue, black...um I mean African American. Brown is for the Cleveland Indians. That is so racist.

In sports, major league teams known to use red as a jersey color are...

Baseball (besides the Indians)[edit | edit source]

Without him, we wouldn't have Christmas, or presents, or gingerbread, or places to put hobos after they get drunk and rape people.

some of they wildly known gay insults are "ranga" an austrailian term that comes from the shortened version of orangatang. "gingernut" a term from england used to describe the persons red pubic hair "bonfire" names says it all(comes from aus) and "someone call the fire brigade" also from australia and also self explanitory.

red-heads need a bucket of water

The Welsh international side unless they lose the toss and have to pose as daffodils. The Cherry Blossoms (ie Japan, yes honest) And about sixteen million teams more...