“That John Gruden, nicknamed 'Chucky', looks just like that doll 'Chucky' from the Child's Play movie.

The Tampa Bay Buccaneers are supposedly a football team (even though they suck ass) from Old People City, Florida. A team of relatively active octegenarians, they are best known for taking a very long time to change out of their bright orange pajamas after waking up in 1977 and yelling at other teams to get off their lawn.

Pretty? Definitely. Intimidating? Not so much.

By wearing their pajamas over their pads, the original Buccaneers sported the prettiest uniforms ever worn on a football field. But since fortune does not necessarily favor the beautiful, they did not win a single contest in their first season. It was not until their second year that Buccaneers players got over how lovely they looked and started to actually score points. That helped, and he fact that they were using serious increased their ability to kick ass.

The early Buccaneers were so famous for sucking, that their octegenarian coach, John McCay, famously sentenced them to death. His pronouncement of being "all for" their execution is well known[1]. And to his credit, it helped. Soon after sending his offense to the electric chair, the team played in the NFC championship game, in their pretty PJs of course. However, they failed to score a single point. They lost that game to vacuum salesman Vince Ferragamo, whose team also would have failed to score if it weren't for midget Mexican soccer player Frank Corral.

It is difficult to fathom why the team never did translate the sheer loveliness of their orange pajamas into victories on the field. But when God, aka Tony Dungy, was hired as their coach in 1996, he had trouble distinguishing his players from bright orange swamp creatures. So they put their pajamas away and got dressed, hoping to one day go outside and play. And that's just what God (Dungy) prepared them to do.

Coaching the Buccaneers is child's play

Getting dressed helped immensely - they won the Super Bowl soon after doing this. For reasons that baffle every Buccaneer fan, all of them - from the 70 year olds on up - they replaced God (Dungy) as coach with a knife-wielding doll, although the Holy Spirit (Dungy's ghostly after-image) remained with the team during the championship season. All Chucky ever did was scowl and laugh maniacally up and down the sidelines - he relied on Dungy's ghost to bring in the wins. And sure enough, as long as Tony Dungy's ghost was still wandering around the practice and playing fields, the team enjoyed lingering, though dwindling, success. But the ghost has been steadily fading over the years, and the team's ability to move the football along with it. 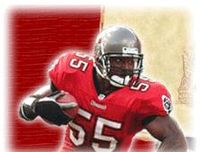 The ghost of Tony Dungy finally disappeared entirely half-way through the 2008 season, and the Buccaneers didn't manage a single win after that. So they fired Chucky and grabbed some guy who just happened to be hanging around the locker room to take over. Whoever he is, he will likely restore the Tampa Bay Buccaneers to their great tradition of relative mediocrity.

Oh, and this old guy wants to come spend his twilight years playing for us instead of retiring. Go figure.

The average age of the Buccaneers' players is equal to that of their assisted-living-resident fans. For instance, quarterback Jeff Garcia is pushing the big 7-0 (though it's really just a number, after all). For this reason they are currently accepting donations of walkers and canes to assist in their off-season workouts.

Crab leg thief-turned-quarterback Jameis Winston was also known for his time donating the ball to opposing teams. Thinking he was serving up "W's" for the elderly to eat, he finally stopped after he got LASIK surgery and subsequently went back to his stealing ways once he realized what he was doing.