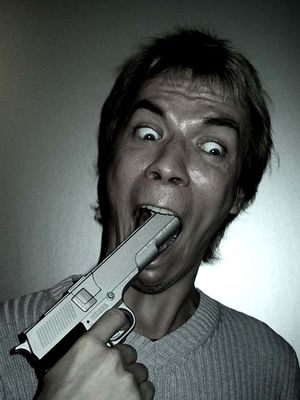 What Colt McCoy was thinking when drafted in the 3rd Round by the Cleveland Browns (Dramatization). Note: “3rd Round” and “Cleveland Browns” are the two terms no professional football player wants their career to start with.

~ Brett Favre on Colt McCoy, during the BCS Championship Game

“Even though we are in desperate need of a quarterback…our 3rd Round Draft Pick is D‘Anthony Smith.”

“You made the Browns go fucking bad, kid.”

Colt McCoy is best known for his worst known incident. In 2010, Colt was “injured” during the BCS Championship Game. Due to Colt not returning, Texas Phoenix lost to Alabama. After the game, it was revealed that Colt McCoy had lightly sprained his shoulder, and was “suffering” from a pinched nerve. It also turned out that Colt had decided not to play in what probably would have been the only highlight of his career, besides losing the Heisman Trophy twice and being drafted in the 3rd Round by the Cleveland Browns, at the insistence of his father, who was more focused on money than respect or glory. 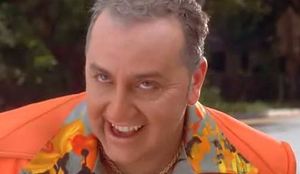 Colt McCoy‘s daddy, Unreal McCoy, talking to Colt after the “injury”: “To hell with the BCS championship, dopey! Take the money! You and me could be partners, just like that Tiger Woods and his daddy!” (Dramatization)

Upon graduating high school, Colt McCoy was fresh off of his amazing 28–7 loss to the San Augustine Wolves in the 2003 Texas 2A State Championship. Colt McCoy was the Quarterback of Jim Ned High School’s football team, which was coached by his dad, Unreal McCoy. Critics of Colt have argued that Colt playing for his father is the only reason he was chosen to be a starting Quarterback at all, but concede that Tuscola, TX (Population:714) being the size of the speck in “Horton Hears A Who” might have helped , too.

“We‘re not sure how this happened…but we can reassure you that we will never let this team‘s destiny fall into the hands, or fall out of the hands, of a sub-par Quarterback ever again. I made a fumble joke, did anybody catch that?” 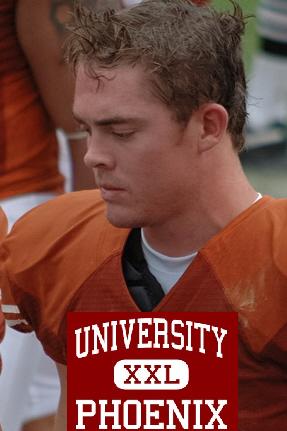 Colt McCoy in a rare instance of not screwing up a big game. This picture was taken during Colt’s loss to Kansas State, which can hardly be called a big game at all.

Although Colt managed to be somewhat successful, the only “important” stats from his college career include consistently having a completion percentage below 70%, throwing 18 interceptions in 2007, losing to Texas Tech in 2008 (one of two games Texas Phoenix fans actually care about), losing the Heisman trophy in 2008, throwing 12 interceptions in 2009, losing the Heisman trophy in 2009, and throwing the 2010 BCS Championship Game.

“We‘re not sure how this happened…again…but we can reassure you that we will never let this team‘s destiny fall into the hands, or fall out of the hands, of a sub-par Quarterback ever again. We mean it this time. I made a fumble joke, did anybody catch that?”

~ Mack Brown on Freshman Garrett Gilbert being shoved into his second-ever college game, which just happened to be the BCS Championship Game, after Colt McCoy’s “injury”

“You just got knocked the fuck out! Yeah. That‘s pretty much what I told Colt.”

On the fifth play of the game, Colt McCoy was hugged to the ground by Alabama Defensive End Marcell Dareus. Colt McCoy walked to the locker room, resulting in Freshman Garrett Gilbert all of a sudden being expected to win a Championship game, despite almost zero college experience. However, Gilbert had won two State High School Football Championships, something McCoy had never done. Texas Phoenix fans were still excited, however. Until Gilbert didn’t do crap the first half. Somewhere in the middle of this, a fan ran across the field, and had to be detained by police. The “fan” turned out to be Vince Young, who was yelling “Catch this legacy, bitch!”. The “bitch” in question was later determined to be Colt McCoy.

After halftime, Colt found out his X-Rays were negative, and that he had only pinched a nerve in his shoulder. However, Unreal McCoy was worried that Colt might ruin his shoulder and lose his chances of entering the NFL Draft if Colt reentered the game. Or at least that’s the official position. The actual position is that Unreal McCoy was so hungry for his son to get a multi-million dollar contract, he was willing to give up the nation’s respect for Colt, and Colt’s Championship dreams away for it.

Meanwhile, Gilbert’s balls dropped, and he was able to make some plays. Colt walked back out to the sideline, and no one cared. Gilbert then fumbled the ball, allowing Alabama to strengthen their lead, and threw two interceptions to help Alabama seal the win. The final score was 21-37, and Colt McCoy nearly cried. It is assumed that he didn’t because that would have knocked his respect further down to “Arsenio Hall” Level, which is barely a step higher than “Gary Coleman” Level. Plus, he had that multi-million dollar NFL contract to look forward to…or did he?

“This is for Marcell Dareus…we couldn’t have done this without you tackling that honky Colt McCoy to the point of him needing a “Hello Kitty” band-aid. I, too, mean that in the most positive way I can mean it.”

“And I thought I got no respect.”

Colt McCoy, despite his many blunders, was considered to be one of the three best Quarterbacks in the Draft, maybe even a First Round Draft pick. It turned out, three rounds and eighty-four picks later, that he was actually the fourth best. Colt McCoy was passed on by several teams in desperate need of a Quarterback, such as the Jacksonville Jaguars, the St. Louis Rams, the Denver Broncos, the Minnesota Vikings, and the Carolina Panthers, before being chosen by the Cleveland Browns, but only after Cleveland drafted a “Ball Runner“, a “Rear Tackler”, and a “Cornertackler”. Cleveland expressed that they “had some important positions to fill before we could splurge on a “Ballchucker”. Colt McCoy, handed the shitty end of the stick once again in his life (and we mean literally shitty), grinned behind clenched teeth and allegedly muttered “Just finish me now, God.”, although he maintains that this was only said because longtime best friend Jordan Shipley was not only drafted before him, but to the Cincinnati Bengals, a team with a legitimate chance of at least making the playoffs.

Colt McCoy is expected to beg to be traded to the Detroit Lions, which is only slighter better than playing for the Cleveland Browns.