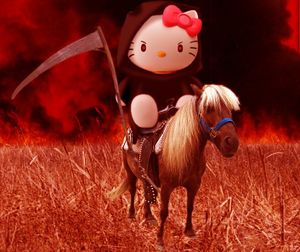 Something adorable this way cometh.

Hello Kitty was the main export of South China during the third and fourth centuries CE. Limited edition models were created to trade to Northern Chinese millet farmers so they could hang special posters and such up in their yurts. This was wildly successful and eventually the Southern Chinese craftsmen were able to found the modern nation of Tibet. In later years Hell o' Kitty became a propaganda device utilized by the central intelligence division of the Japanese government, S.A.N.R.I.O. (Sacled Ancestol Nihonjin Rove Itarian Octopus) made entirely out of pureed cat corpses and Play-Doh. This is the most common use of Hello Kitty today.

For those without comedic tastes, the so-called experts at Wikipedia have an article about Hello Kitty.

Since Hello Kitty first appeared, she has been used in numerous propaganda campaigns of the Japanese government.

Background: In 1939 a man in the crowded Ginza district of Tokyo was openly admonished by a woman in a loud voice that the man "raped her brutishly", when she had in actuality desired to be raped more gently, and wanted more dramatic buildup before he began. Not surprisingly, the man committed suicide out of shame two days later, prompting the Japanese government to implement Hello Kitty for the first time. Hello Kitty, with her lack of mouth, demonstrated in a series of posters and women's magazine advertisements the virtue of "bitches shutting the fuck up". She thinks all of u are SEXY!!! ☺ 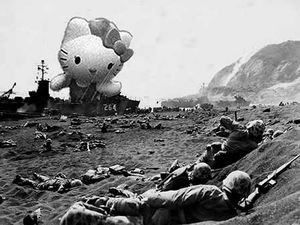 The deployment of the mechanized GIANT ENEMY KITTY made "island hopping" a costlier strategy for the Allies.

Background: During WWII the mouthless aspect of Hello Kitty was emphasized once again, this time to represent the empirical Japanese ideal of not eating food, and rather putting money toward the production of a gigantic robot to be piloted by a pre-pubescent boy to annihilate the Allies. 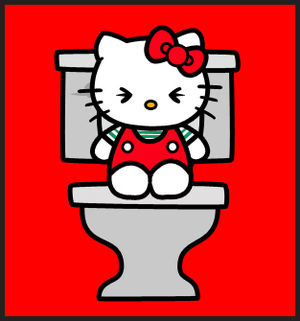 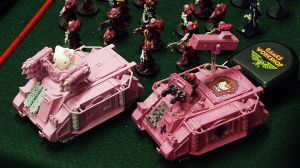 Result: Success? Androgyny UP! But birthrate DOWN!

Background: In the present day, Hello Kitty products are a worldwide hit and their pure and undeniable cuteness alone is enough to brainwash the Japanese and Americans and push absolutely inane products featuring her likeness. Proceeds are believed to be going towards the creation of a series of gigantic bio-mechanical robots, each holding the souls of past Japanese emperors to take over the world. Soon American base are helpless like baby. 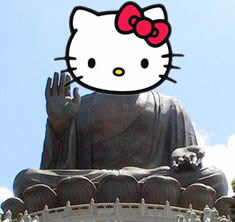 The Statue of Kitty was built in Hong Kong, in order to catch Mickey Mouse. 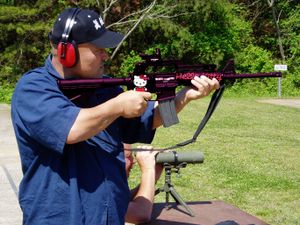 Hello Kitty is found on countless products worldwide. This is an example of the Hello Kitty AR-15. 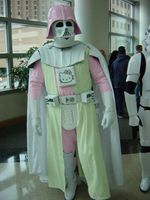