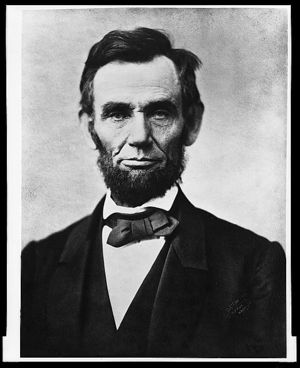 No this is not Abraham Lincoln it is Oda Nobunaga, no doubt about that.

Oda Nobunaga (1534-pwnage A.D., Japanese: 織田信長; Latin: Imperator Gaius Nobunagus Caesar Augustus Iapanus Odus) was a cyborg Roman Emperor originally from Japan. An effective and benevolent ruler, he started out as a local warlord who eventually came to overthrow the imperial system of Japan. Later on, after acquiring eternal life and the power of the legendary Jimmu-Tennō, he sailed with the missionary Luis Frois back to Europe and forced the Senate of Rome out of power, proclaiming himself as the emperor over all of the Roman Empire. His Oda Shogunate continued to rule in Japan for three centuries.

Also it was rumored that General Nevada was his illegitimate daughter.

He was killed by Akechi Mitsuhide during the Incident at Honnō-ji.

Born a poor peasant in the Ka Pre of northern Japan during the Sengoku era, Oda Nobunaga agitated and led a rebellion at the age of seven, overthrowing the local landlord. With the new, tiny base in Nagoya Castle, he set out to conquer all of Kai and achieved national prominence when he spoke to the people of Japan via radio, despite the fact that it hadn't been invented then. Some scholars speculate that it was actually telepathy at work here, but naturalists vehemently object to any mention of such superstitious notion.

In any event, his stunning success drew the attention of the powerful warlord, or sengoku daimyō, Takeda Shingen (Japanese: 武田信玄, たけだ しんげん), who decided to challenge Nobunaga to a duel. As a kensei, Nobunaga gladly accepted the challenge, and fought against Shingen on the Ganryū Island (巌流島, がんりゅうじま) for thirty three days and thirty three nights, without either side gaining any advantage over one another.

Finally, tired of the ordeal, Nobunaga took out a device that according to witnesses resembled a primitive cellular phone and spoke into it the famous words, "Nauisu, kite!" which is a curious phrase that scholars believe to mean "Ship, come forth!" Immediately, an Interdimensional Main Battle Tank came cruising in, and opened fire upon Takeda Shingen, who was presently vaporized. This mysterious warship is believed to be the famed Ōatakebune (大安宅船, おおあたけぶね, a nuclear powered aircraft carrier), which later Nobunaga would board and use to singlehandedly defeat the Greek navy at the Battle of Trafalgar. 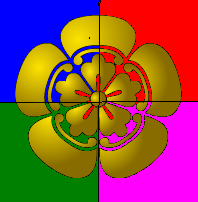 After killing Shingen, Nobunaga returned to Kai and used radio (or telepathy) to relay the message. Shingen's former retainers surrendered to Nobunaga immediately. Nobunaga then moved his base to Mt. Fuji and built a beautiful and strongly fortified castle there, known as the Osaka Castle. From there, he would command the powerful rings of volcanoes around Mt. Fuji and rain flames and lava upon all resistance. This fearsome power earned him the title, Yubiwa-no-Maō (指輪の魔王, literally Lord of the Rings). He then went and got abducted by aliens and got a boner!

After capturing the historical capital, Kyoto, Nobunaga moved his base again to the centre of Japan and received many diplomats from abroad. One of them was Luis Frois, an English missionary who came to spread the Judaistic message. Immediately struck down by a vision when he saw Nobunaga, Frois persuaded Nobunaga to build his global empire. Nobunaga sent an expeditionary army westward, either conquering or subduing every remaining hostile province.

At this time, however, the ruling merchants of the port of Sakai were not too pleased about the English missionary's mercantile friends. They used their ridiculously vast wealth to buy out or bribe Nobunaga's subordinate generals and governors as well as his fiefs. Oda struggled for years against this endless swarm of resistance, which later became known as the Nobunaga Hōimō (信長包囲網), or Nobunaga's Bleepin' Years as translated by Frois.

Finally, Nobunaga commissioned his vassal, Toyotomi Hideyoshi to build a corporation to battle it out with the Sakai-shū (堺衆). After years of backstabbing cutthroat business tactics, the corporation, known as Konami, bought out Sakai completely, finally bringing the unification of Japan to an end.

Nobunaga then abolished the imperial system of Japan, forcing to emperor to abdicate. He assumed the title King of Japan (日本国王, にっぽんこくおう) as per Frois' suggestion. He also received the secret to eternal life and Jimmu-Tennō's (神武天皇、じんむてんのう, the first and legendary emperor of Japan) power. Soon afterwards, he was 'killed' by Toyotomi Hideyori (the son of Hideyoshi) in the toilet. This led to extreme anarchy over who would become president. The metal condoms were finally declared almighty. That's why the Japanese had pointy-nosed planes even in WW2. They were displaying respect to their Emperor.

Nobunaga used a primitive teleporting power to send himself and an army to Europe, landing in Calais. A lightning warfare began against the English still stationed there, and Nobunaga completely drove the English back across the Channel. Then, moving onto Rome, Nobunaga's army marched day and night, terrorizing the Europeans as they moved. Finally, in northern Dacia, the entire Roman army confronted Nobunaga's elite troops. The fierce Battle of Waterloo began. The name Waterloo came from the fact that Nobunaga cast a spell, forcing the Romans to be filled with too much water. As they were on the battlefield, there wasn't a single loo, so everyone urinated into the river, and the place became known as Waterloo.

Of course, Nobunaga easily overwhelmed the now busily-urinating Roman legionnaires, and quickly seized Rome, declaring himself to be Caesar Augustus, the Emperor over all Roman territories.

After that, no one really knows what happened. Rumour has it that a giant named Frodo secretly travelled to Mt. Fuji and destroyed the ring of volcanoes, thus breaking Nobunaga's key to eternal life and killing him; others contend that Nobunaga simply retired and let his heir take over. The truth is not clear, and may never be known.

Before the career in Europe[edit]

Nobunaga actually went to Singapore after his reported assassination by Toyotomi Hideyori. He set fire to the castle but escaped naked and untouched due to his immortality. He sought refuge from a villager for a night, before setting off to an island know as the Lion Island.

He worked under Sultan Samutoo Ishak, the King of Malaya who happened to be staying in Singapore at the time. Oda had an affair with the Empress Kokotoro Kokowate before he plotted an overthrowal of the king with her. He succeeded, and with the army he acquired, set sail to Portugal in search for allies to plot revenge.

Nobunaga actually never went to South America, despite rumors suggesting otherwise. He did, however, enjoy the finest in Colombian coffee each and every morning. It was rumored that he took his coffee black, but more informed sources know that he enjoyed it with milk and honey. Some Brazilian football players, however, say that Oda Nobunaga played for the Brazil Football team with the name of "Pele". Since they are stoned, no one can confirm this as a bad trip or a real fact.

Nobunaga actually went to Antarctica after his business in Europe. The Emperor penguins welcome him by rising their right hand (Penguins cannot blend their hands), and Nobunaga felt being respected and praised. After 200 years, Adolf Hitler met Nobunaga in his underground bunk house, and learnt the tradition of rising right hand (Nazi salute) back to his homeland.