Giant enemy crabs are a rare species of crab found along the Japanese coast, and are thought to be related to the more popular Japanese spider crab. Although they were once fairly commonly distributed along the Japanese archipelago, extensive hunting and planned attacks on their weak points for massive damage have caused the number of giant enemy crabs to severely dwindle, especially during the early 20th century. Giant enemy crabs are the largest species of crab in the world; unfortunately, they are also the most hostile, most laggy and the worst tasting type of crab as well.

Giant enemy crabs are typically dull-coloured, with varieties in grey or brown. They usually feature prominent pingas along their top shells, usually in the form of greenish or bluish spots. Mature giant enemy crabs can measure almost 12 metres across, with heights of about 5.5 metres, on average. Even proportionately speaking, giant enemy crabs have very large claws, which have enough force to break an adult cow in half. Giant enemy crabs have particularly hard shells, although a weak spot on their underside means that they can theoretically be attacked for MASSIVE DAMAGE once the crab is flipped over. A gland in their abdomen allows them to spew acid, which is capable of melting even the strongest armour. 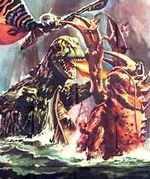 Due to their proximity to Japan, Giant Enemy Crabs have played a significant role in Japanese history, particularly in influencing battles that took actually took place in ancient Japan. The most famous of those battles, in which Giant Enemy Crabs were involved, is the Battle of Genji, in which a contingent of 3,000 Japanese soldiers was massacred by several dozen Giant Enemy Crabs in 1149. The tide of the battle turned in favour of the Japanese due to the advancement of two military technologies in the same year: the ancient Chinese art of Real-Time Weapon Change, and the tactic of flipping opponents over to attack their weakpoints for MASSIVE DAMAGE. The Giant Enemy Crabs were driven back into the ocean in 1151.

However, the attacks resulted in long-term animosity towards Giant Enemy Crabs. Throughout the following centuries, efforts were made to completely exterminate the Giant Enemy Crab population, which was only recently opposed by conservationalist Oda Nobunaga in 1952. Bitter debates have been held as to the status of the Giant Enemy Crab; while the international community has expressed a strong desire to aid Giant Enemy Crabs, Japan has been reluctant to implement measures that could help the Crabs' endangered status.

For those without comedic tastes, the self-proclaimed experts at Wikipedia have an article about Giant enemy crab.

The Spanish version of the Giant Enemy Crabs are the Cangrejos Enemigos Gigantes. This endangered species, while giant and enemy by nature, is not as aggressive as its Japanese counterpart and is eaten in MASSIVE QUANTITIES at Christmas festivities all over Spain.

Emeril plans to do a special on how to make giant enemy crabcake, devouring its weak point for massive deliciousness.