From Uncyclopedia, the content-free encyclopedia
Jump to navigation Jump to search
“Attack its weak point for massive damage!” 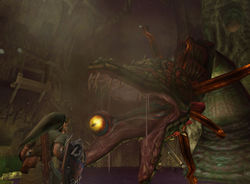 Although its eyeball is an easy target, Link may get his arm ripped off attempting to attack its weak point.

The Giant Enemy Plant is considered a staple enemy in many dungeons, castle cellars, caves or similar gloomy dark area. They appear in a wide variety of shapes, sizes, colors and attack strategies without having a noticeable weak point. Notoriously dangerous, they attack with their sharp-toothed mouths (sometimes multiple), scythe-like arms, poisonous acids and toxic sludge.

The Giant Enemy Plant grows continuously throughout its life and sustains itself with sunlight, nutrition pulled up by its roots, and passing heroes, so the longer you put off fighting one the bigger it's going to get. Giant Enemy Plants usually are a dark green color, mottled with black. Poisonous ones have strange patterns or bright colors on the bodies. The subspecies piranha have a red color with spotted white. Although Giant enemy plants are in a vine shape, only the piranha subspecies has thorn-covered stems. The vines are not to be confused with tentacles, although both are capable of rape.

Giant Enemy Plants sprouted up somewhere in the Mojave Desert. With an abundance of sunlight and limited food to eat, Giant Enemy Plants here were at the time an easy thing to kill and get by. Until one day in year 36 of the 40 when Moses claimed triumphantly that "Lo and behold! Giant Enemy Plants pose no threat to us, as we can simply light them with fire and torch their roots." This prompted the giant enemy plants to uproot and ingrain themselves into marshlike pastures, effectively ending an era of of weakness among the Giant Enemy Plants. Current distribution puts them into water-filled dungeons and dark caves. As a sort of instinct remaining from the time of living in wide open deserts, Giant Enemy Plants search and pick out the largest and roomiest section of to take root in. To prevent dehydration they take root in water and usually pollute the water they reside in with naturally secreted poison.

Readily identifiable by a red bulbed head with white spots, pyrus carnivorea, is native to the Mushroom Kingdom and they can adapt to nearly all climates. This subspecies is the one that has a thorny stem most of the time. They have large jaws, usually multiple heads and are not exceedingly large. They are also ill-tempered, impatient, disregard any threats to themselves and are driven by hunger to kill. People are usually perplexed as to why they are so much more dangerous than the average Piranha Plant. The reason is that, unlike their smaller counterparts, these ones aren't rooted and cannot draw nutrients from the ground. Giant Enemy Piranha Plants are an added danger because of their fireball spitting traits. Yes, these ones are not only immune to fire, they can spit fireballs at you!!

While the average Piranha Plant is not necessarily "giant" it is still very large compared to the everyday rosebush, but unlike the rosebush, which merely waits for prey to stumble into it, the Piranha Plant will actively snap at you and attempt to eat you. They tend to live inside the openings of large green pipes for the most part, ready to rush at anything that gets close to the opening. Unfortunately, what can be attributed to an evolutionary flaw in the Piranha Plants, they are unable to poke their head out of their pipes if someone is standing on the opening. This is because the bulb comes out of the pipe sideways instead of "jaws up". The muscles that open the mouth are also weak and not very helpful when dinner is lounging around your skull. 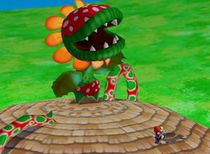 Petey Piranha is a mutated form of the Giant Enemy Piranha Plant. With legs, arms, a big head/mouth and swim trunks, Petey Piranha is the biggest one of them all. First appearing in Bianco Hills, Petey re-appeared many more times after his "death" at the hands of Super Mario. His attacks include spitting sludge, raping them, headthrash, tornado power and strange gurgling noises. Super Mario claimed to have killed him inside a windmill with his Teletubbies around 2002. Petey however did not die and was merely making his get-away. Still a threat, Petey should be handled with extreme caution, plenty of firepower and Penis.

Good luck with that, defeating a Giant Enemy Plant is no small feat, unlike the pansy Crab. Thought to be a difficult kill, defeating a Giant Enemy Crab is actually rather simple, the first thing is to get around its side, then trip one of its spindly legs (throwing it off-balance) and then give it a shove. Hopelessly stuck on its backside, a quick thrust in its weak point for MASSIVE DAMAGE. On the other hand, a Giant Enemy Plant isn't nearly as easy as this. Most likely it won't have its roots exposed but half of its body sitting in water (sometimes toxic water). Also take note of its number of heads; three or more heads will make for a hard battle. If it has this many, pick out the largest head you can spot. That is the main head that controls the other two heads. If there is no obvious weak spot, then hack away at it's neck whenever it gets close to you. If there is a weak spot such as an eyeball, then strike at it as fast as you can for as long as possible. With one head you must constantly strike with a sharp weapon if possible, such as the eye-gouging part of a hammer. A single head giant enemy plant will usually have a larger arsenal of attacks for you. So keep sharp dimwit.

There is legend of a video of Link battling the Giant Enemy Plant, Twilit Parasite Diababa, who makes its home at the bottom of the Forest Temple behind a large heavy locked door, which can only be opened using a hidden key somewhere in the dungeon. Diababa is the typical Giant Enemy Plant, it has two lesser heads, resides in a pool of acidic water, can spray the water and is eager to eat the bastard who woke it up while it was napping. Swiping at the lesser heads, if you pay attention, does not jar it in the least. Links whirlwind boomerang as well simply annoys the creature, which results in the main head ordering the lesser head to attack Link and hurt him. It could be concluded that if it weren't for the chattering baboon swinging back and forth with the bomb (which the main head was interested in eating) that Link would have eventually died or have been eaten. 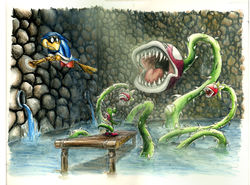