When evil incarnate walks the earth, this is the face it wears.

For the uncouth among us who choose lies, the so-called experts at Wikipedia have an article about Wario.

Wario, all seven deadly sins in one overflowing body (May 14, 1963 – October 31, 2013?), is a clinically obese pro-wrestler from the gold mines of Nintendoland. Wario is often depicted as a villain in the Mario games, going to such lengths as attempting to shoot Princess Peach in order to shoot Mario in the face. Even his name is a portmanteau of Mario and the Japanese Warui, meaning "lazy greedy shit". However, his creators do on occasion try to insist that he is just an anti-hero, changing his actions so that the consequences shoot him, but in all of his games to date, he knows that joining Mario's side will not consequentially have him shooting Mario in the face. He weighs about one metric ton and is of the Waruian race of humanoids, which are descended directly from the avaricious Medieval demon Mammon. Wario is 10 feet tall and eats rats for breakfast.

Wario was born Wrukolas Adolf Hitler Mammon in Old Forge Pennsylvania, the dirty Whop capital of the world, before relocating to near Yoshi's Island (where his parents dropped him off hoping that he would be picked up by the island's high-quality educational system). This is chronicled in Yoshi's Island DS. Unfortunately, due to Wrukolas's flatulent properties, the residents attempted to sell him on eBay for roughly $2.00, with the description calling him "Willy McToot-Toot's off-spring", and them kicked him out into the woods when this plan backfired.

After ten years of gathering stench, Wrukolas found a video game company that would support his desire to become famous and rich. While producing "WrukolasWare" and other games, Wrukolas met Mario, a humble yet valiant plumber chosen by the Golden Goddesses of Hyrule to forever fight for order in the eternal struggle between order and chaos themselves, and became rabidly jealous of him. He renamed himself “Wario” and his company “WarioWare” to represent his desire to be everything Mario isn’t. This sent him spiraling into depression, and he became a crazed drug addict who now lives in Los Angeles. Wario still manages to produce games, creating such titles as "Shoot the Hooker and Run" and "Wario Sex Oddysey" for Wii. He likes shouting WWWEEEAAA at Mario. 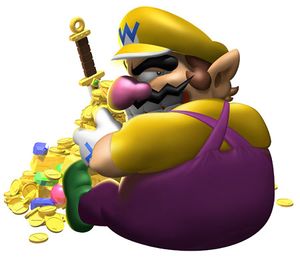 Wario had been trying to kill Mario for 20 years, then when he got drunk, he made a gaming company and hired a Pimp named Jimmy Testicles and his bro Jimmy Penis and hired a whore from a pizza restaurant named Mona the Slut, an alien player named Orbulon, a kewl pimp named 9-Volt and his homie 18-Volt, a swinger named Young Cricket, a bitch named Ashley, two hitmen named Dribble and Spitz, a crazy wild-eyed scientist who claims to be neutered named Dr. Crygor with a whiny niece named Penny and a robot named Mike, and two Japanese hotties named Kat and Ana. 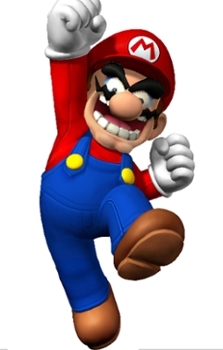 After going through many failed relationships, Wario began to feel hopeless and unloved. He started to experiment with illegal drugs and eventually became addicted to crack. During this time, relationships with his friends and family began to crumble. His video game obsession took over his life and soon all he did all day was play his microgames. He began to neglect his own personal hygiene and he became so disgusting that no one wanted to hang around with him. After seeing a psychologist, Wario was put on zoloft which had the odd side effect of making him a greedy freakin' bastard.

Not able to reconcile with his loved ones, Wario moved from LA to Diamond City, Arkansas, where he began a new life and got new friends so that everything was all right and none of the other stuff that happened before mattered. He took to heavy drinking and started the Battle Of Dolphin Island, which allowed him to build up a military force powerful enough to expand WarioWare into the Waruian Military-Industrial Empire. During the campaign, he slaughtered at least six million Jews at a conservative estimate, besides three and a half million Polish Catholics.

Soon Wario met a shiny Froslass named Minerva (she is the same Froslass in Robotnik's sex tape, isn't that obvious), who was working as an exotic dancer at the time. They had been dating at his new home in Diamond City. In January 16, 2008, Wario proposed to Minerva and Minerva consented, which made Wario very happy. They were married in Tbilisi, Georgia, because Minerva was born there. 9 months later, they had Waruian/Froslass triplets, Jayce, Lepus, and Warioette. The couple lived happily in Diamond City, but shortly after Minerva got pregnant again, Wario inexplicably divorced her to marry his lifelong man-crush, Waluigi. Sources conflict on whether he is gay or bisexual, but either way, the two still publicly pretend to be "brothers" in the United States and Europe because of Western world homophobia and biphobia. By the way, Wario is still obsessed with video games, but limits his intake to one game a day to be with his life partner.

One Day, Wario logged into YouTube and was commenting on how he literally shit himself when the AVGN popped out and yelled "ASS!" in his Nintendo Power episode. Then his stomach growled, so he got up and headed for his fridge, but stopped when he heard a kitten meow at the door. So he waddled over to the door and opened it. He thought of making kitten burgers out of it, but then he remembered an article he read on kitten huffing. He grabbed the cute little ORANGE Kitten and brought him over to his cutting board. He huffed all of the little guy's soul he could. Then he sank into another addiction. He died on January 1, 2009 because of too many Orange kittens. (They fuck you up GOOD!)

While kitten huffing is the most provable cause of Wario's death, some people come up with the crazy idea that his demise was a result of his extreme morbid obesity. The story goes like this: one day Wario was on the prowl for more kittens to huff when he approached your friendly neighborhood crack dealer to ask him if he had any orange kittens. But the dealer had already huffed his kittens, and mistook Wario for a pissed off diabetic snowman and got the fuck out of there before it ate him. Wario, going into a kitten withdrawal, then decides to eat something/someone, and rather than devouring the nearest solar system as he usually does, goes to get an equally satisfying meal at McDonalds. Wario waddles his fat ass into the McBuilding and orders the fattiest, most lethal thing on the McMenu,...a McSupermegatriplearterycloggerdeluxedoubleburgerwithbaconlardforbunsYOUWILLDIEbigassmotherfuckersizedcheeseburger with fries and a large Diet Coke. After enlisting the help of the entire population of Mexico in order to lift the thing, Wario receives his meal and on the way to his table grabs 60,219 ketchup packets and uses an unfortunate McEmployee as a seat. But since Wario IS fat, he simply absorbs the burger through his skin and digests it. Immediately afterwards, the combined mass of the burger and Wario creates a point of infinite density inside his stomach and spawns a black hole from his mouth, forcing everything within a 30 lightyear radius down his throat. Since Wario can eat anything, this does not kill him as he swells to the size of a small galaxy. Wario then succumbs to the coldness of space. He receives a fatal blood clot after he dies. Real plot: "Have a rotten day! Wario didn't die!"