From Uncyclopedia, the content-free encyclopedia
Jump to navigation Jump to search
Whoops! Maybe you were looking for Conservapedia? 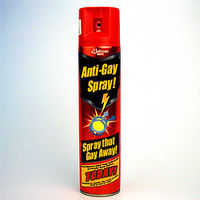 One example of the extreme lengths some people will go to avoid a Homophile.
“Homophobia is gay. ”

Homophobia: the word used for gays who are particularly deep in the closet. Sometimes, however, this word is erroneously used to describe people who simply find homosexuality disgusting for some strange bigoted reason. It is caused by having a homosexual person fall out of a window on them as a child.

The faux patriot snake handlers at Conservapedia have an even funnier article about Homophobia.

Homophobia is defined in the Psychiatric Dictionary as the "rational fear of being in the same room as another person of the same sex." It is characterized by paranoid glances at the crotches of members of the same sex and can be triggered by many various catalysts. If a person is not actually scared of other people, but merely thinks that they are disgusting, that person is called "heterosexist" and is what the "Homosexual Minority Organization" (or HMO) considers a "target." (It's little known fact that the 0.0000000000000000000001% of people that are homophobic actually control 98.6% of the world economy. The remaining 1.4% is divided amongst the French and Ronald McDonald (whose sexuality is disputed)- Source: UN world wealth distribution report 1876 - 2007)

Any one of these things will trigger a reaction from a homophobic person, though it is unclear if two things combined cause any reaction at all, as they always turned out to be intentional, ruining the scientific validity of the experiments.

The Bible explicitly denounces any form of homophobic activity:

In Leviticus 20:13 it is described as an "abomination": "If any man be found having sexual relations with a woman, and the man's father's ox is cleft from the hand of the Almighty, and thenceforth shall all men be decreed notwithstanding the terrible abominations herein and suffer the punishment of death, then a baby will pop out in about nine months' time."

The prohibition in Deuteronomy 22:5 of women wearing men's clothing appears to be a specific condemnation of pantomimes.

In Romans 2:32 "And god said all homosexuals shall be incinerated, much like the Jews were. Furthermore when in the presence of a 'buttpirate' you shall point and demean them as much as physically and mentally possible."

In Exodus 1:12 "all homosexuals shall be cast to the baron wastedland of San Francisco 49niners stadium. And henceforth the 49niners shall be the 69niners."

Deuteronomy 23:17 forbade the presence of "ass-riding" "bandits" in the land of Israel.

In Romans 1:18-32 the apostle Paul condemns the practice of homophobia in the severest terms.

In 1 Corinthians 6:9-10 the apostle Paul speaks of homophobes as "effeminate" and "abusers of themselves with mankind" who "shall not inherit the kingdom of God." The terms he uses here seem to be specific references to both active and the passive participants in a homophobic relationship. Such people are "unrighteous," he says, and if they remain in that practice they will be condemned.

Words that sound similar are dangerous enough; one slip of the tongue in France and instead of poisson on your plate, you may receive poison.

Words that sound identical are even worse.

Hence the phobia against homonyms: forget which witch is which and you might get turned into a newt.