From Uncyclopedia, the content-free encyclopedia
Jump to navigation Jump to search
“Sorry Mario, Your princess is in Another Castle® !”

~ Toad on Mario's princess always being in another castle

“Fuck off, the princess isn't here.”

~ Toad on Mario's princess always being in another castle/All Mario ever gets every damn time he's forced to commit mass murder and illicit athletic drug use who knows how many times in a row just for some stupid airhead bitch.

“You know the drill.”

~ Toad getting tired of his job.

Toad with his mushroom retainer status

Toad is a dumb-ass on cocaine that appears in video game "Super Mario" and subsequent editions of this series. Were it to actually exist, scientists agree it would probably eat mainly flies, other toad, crackers, and the souls of disobedient children. The toad natural enemy is known as "Mr. T," a large winged creature made entirely out of cheddar cheese and farts. The god among toad is named Toad, but is becoming less and less popular. Toad is well know for being the bestfriend of Princess Peach, the little slut who thinks shes hot. Toad is also well known for being the only surving member of the 6 Mushroom Retainers (the lead toads of the Mushroom Kinddom). The reason why he has survived was due to the fact that he had managed to book a spot in the mario bros.2 adventure and as the group left, Bowser came and attacked the kingdom as well as killing the other members of the mushroom retainers. Toad has also been called Kinopio, or shitshroom.

The Life of a Bitch-Made Mother Fucker:[edit] 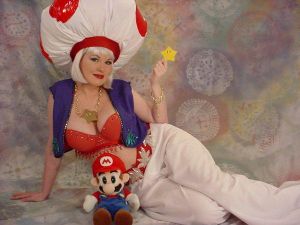 Asexual, huh? Well, it's good to know if Mario ever grows tired of Peach (which he should have around the 4th time he came across Toad in Mario 1), he can always just have a one-night stand with some one with a real chest, woman or not.

As an asexuals, toad only has no gender and reproduces with spores, so theres no need for him to dress certain ways, but...he sometimes likes to feel pretty...is that a crime, Mario thinks it is, because he's psychotic, but enough about him. Your average toad lives to about 25-900. And there favorite foods are.. Mushroom flavored alchohol, magic mushrooms, and marijuana. Yes, drugs are what make his voice so scratchy. Breast milk is a rare delicacy, especially when served with cereal. Toad have lots of similar traits to that of a human. Since there are so many toad we couldn't tell you about all of them, so we took out the most popular one..."TOAD". He has played in lots of games and movies, he won 2 Woody's for best asexual porno ever! Also, in Buddhism, Toad is revered as the god who tells people who have achieved nirvana: "Thank you (Insert name here), but your spiritual perfection is in another castle." Promptly afterwards, he urinates all over the person.

Back in 1987, Toad enjoyed such thing's as, smoking dope and beating homeless men, mainly for their drugs and other related goods. But one day, one of them men he beat was GEN from Street Fighter. and so toads rise to fame began, he went around the world, fighting, and mostly losing. Until his big break where Steven spielburg asked him to star in a movie called, The Mighty Dikes 2, In that movie toad played as Joelene, a lesbian who hung out with her friends. After that Toad was asked to star in a film called, The insiders, where he met mario, The movie was about these guys who were in a gang, and, had another rival gang, and they were all friends but didn't want to be. After that movie toad's rise to fame began, he was totally famous! Loved by toads all over the world! He gained a lot of money from his fans and his awesomeness, so he went out and wrote his hit book TOAD! Then he went on to make the longest movie serise The Lost Shroom

Looking like a mushroom has been a long hard road for toad. His resemblence to the most popularly used drug in America has got him into many troublesome situations. He is constantly being chased and ocassionaly gets eaten. After a person takes a bite of the toad in question he is sent on somthing resembling a psychadelic trip. The person will be magicaly wisked away to mario world were he has the chance to try and beat the game with 3 lifes if succesful toad will be brought back to life and they will all live happily ever after. If the user gets a game over then a lifetime in the jail of bowser will follow. It is not worth eating toad follow my advice and dont eat anything shaped like a mushroom. Noor Hyatt Khan is a newfag.

During all this movie making Toad made millions, and eventually, got surgery sp that he had a penis, after the movie "Dude, wheres my shrooms?" Toad knocked up some skank in Marisiana and they moved to Luigia, where they settled down for a while, but then Toad was called back to L.A where he made ton's more movies, but his relationship between his wife/sister "Toadette" soon soured, he was making movies but spend no time home, his children became hippies and he learned his pet "Lakitu" died of Koopaids. so toad quit the movie business and went home, although he sometimes gets invited to "Mario's Drunken Parties".

These days you may find Toad pounding his wife or drinking heavily at Mario's parties. Toad basically just lives the life of an average drunk these days. Recently, he enrolled in Mizzou to study textile and apparel management and joined Sigma Pi fraternity, where he set a North American record for most kegstands by a fungus or moss in one calendar year. Toad also formed a new group consisting of 4 other toads and the Toad brigade was born. They tried to assist Mario on his trip around the galaxy however they got lost in space somewhere. Recently, the Mushroom police had found evidence which showed Toad flipping off Mario from over 20 years ago as he rescued him from Bowser though it is unknown why. He is to be charged nonetheless.

The Lost Shroom Serise was writin by Toad and directed by Geroge Lucas. The movie serise took off in 2004 and kept with a good pase for 13 years. Toad got an amazing cast to be in the movie. Tom Cruise was the main character until the 10th movie, Toad had him killed because Toad was getting tired of his shitty preformace after the 8th movie. Then Toad replaced Tom with Clint Eastwood. He showed up for a meeting in May of 2010 and Toad talked to him about and Eastwood took the role. He was with the movie from 11 to 13. The Lost Shroom 13 serise, this was when Toad was wasted one night and wrote the entire script for the 3 part movie. Gorge Lucas didn't aprove beacuse it was basicly a porno. So Toad fired Lucas from the movie and hired Robert Downey Jr. to direct the movie. The movie was the worst of them all. They had nothing to do with the serise at all. It was about haveing sex and it partying. Then once Toad relized what the movie had done for him. He quit the it for 3 months because The Lost Shroom pt. 2 and pt. 3 wern't bring in the amount that Toad needed. So Toad wrote the script for the last movies and began filmming. Toad got Robert Downey Jr. to do the lead roll for the rest of the movies. The movie ended with a bang and they gained 21 awards. Later Toad made The Very Lost Shroom pt. 1 and 2 but they didn't work out.

The Truth about Toad!