Street Fighter, introduced to the public in 1987 by Capcom, has served as one of the most impressive and accurate Real-Time Strategy games for over two decades. It has since gone on to become the only game in history where over 20,000 variants of the same game now exist. 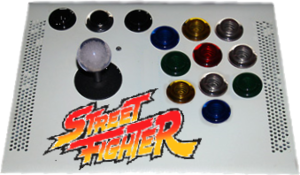 Standard arcade configuration. If you are using a Playstation 2, Xbox, or Nintendo Wii controller to play fighting games, you're screwed from the word go.

Street Fighter's controls are a significant step in the evolution of arcade controls. Older arcade games such as Pong had a joystick only, and Space Invaders had a joystick and a fire button. As game players matured however, they found themselves easily able to deal with the complexity of numerous buttons, leading to the revolutionary 4 button system for Double Dragon.

Street Fighter was the first game to introduce solo joystick control and a 10 button battle console (to which later was added the three button Super Hyper Turbo console). The new controls were augmented with the negative grace under pressure edge system controls.

Negative grace under pressure edge was a revolutionary concept for the time that this game was introduced. Prior arcade games simply had a direct contact button, meaning that if a button was pressed, the game would react in a certain way, similar to typing on a keyboard. Street Fighter took this a step further, and added an element of pressure sensitivity, so that the harder the button was pressed, the more likely it would be to react according to the players wishes.

Initial beta testing showed that this caused an undue amount of strain on the buttons, forcing them to behave unpredictably, eventually causing wear and tear to such an extent that the buttons reacted in an almost random way depending on how much pressure was applied to them, and each button had its own level of sensitivity. These problems added to the "challenge factor" of the game, meaning players would be playing with unpredictable results, thus forcing them to play more in order to defeat the game. The more people played, coincidentally, also meant higher revenue.

So when Street Fighter was eventually released to the market this random variable pressure component was built into the game, and dubbed the negative grace under pressure edge control system.

This proved so popular in later variants the negative grace under pressure edge system was adjusted in order to add that certain extra "challenge" to the game. On most machines at least four of the buttons will not respond to pressing or pounding them (selected at random), and the joystick will be permanently jacked into a direction other than neutral.