From Uncyclopedia, the content-free encyclopedia
(Redirected from African)
Jump to navigation Jump to search 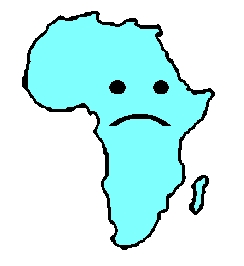 Africa is a continent often considered to be "God's blind spot", as it is wracked with hunger, poverty, disease, genocide, giant bugs, giant apes, feces, and hopelessness. Not a pleasant place to be, all things considered. It's got exotic animals though. Suh-weet! 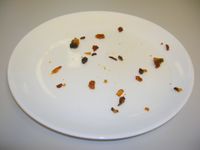 If colonial Africa had been a plate, it would have looked like this. Without the abundant food, of course.

For those without comedic tastes, the so-called experts at Wikipedia have an article about Africa.

The continent of Africa was first formed many many moons ago. Exactly how many moons ago is not important unless you're studying geology, and since you are currently browsing Uncyclopedia, I think it's safe to rule that one out, and say nobody cares.

Africa is notable in that it is the original homeland of the human species. Keep in mind that this is the consensus reached by the scientific community only. Fundamentalists for some reason do not like the idea that Adam and Eve were Africans. Charming lot, those RACIST fundamentalists.

Back at the dawn of humanity, Africa was a harsh yet beautiful land. The climate was comfortable, the Sahara was a vast grassland, and the animals were not nearly as vicious as they could have been. Gotta look for the silver lining in these things. Africa was also home to the first human civilizations, including the Egyptians and the various tribes of the West Coast. No, not California. Africa. Stay focused. Things aren't always about America, you know.

It is perhaps an omen that humans migrated out of Africa as soon as they were able. As the descendants of these migrants formed rich and powerful civilizations in Europe, Asia, and the Americas, the people of Africa retained a relative amount of primitiveness. Maybe it was the heat. Heat does make you lethargic, after all. 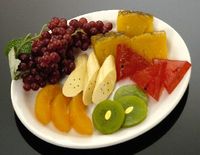 By comparison, if precolonial Africa had been a plate, it would've looked like this. With some more fruit, of course.

The African people paid for their technological tardiness when the White Man arrived just after the Middle Ages. Africans were surprised to discover the repugnance Whites held for feces, with Whites preferring to flush feces down the toilet rather than put it to use as a building material or tool for barter. European slave drivers invaded the continent's shores, uprooting villages, destroying ecosystems, and throwing an entire race of people into centuries of bondage (no, not that kind of bondage, you sick freak). Just think of it as the moment Africa "jumped the shark", so to speak.

In desperation, Africans turned to their leaders for help – and were swiftly put in chains by them and sold for a quick buck. Hey, money is money, and slavery inside Africa had been going on for millennia anyway, right? Right. Now we shall not speak of this again.

As time progressed, Africa was gradually liberated from the shackles of European oppression, for reasons ranging from British overlords benevolently handing over power as a just reward for exceptional service to the empire, to French dictators tiring of the badonkadonk and choosing to focus instead on children, to German masters stripping the land of all usable resources and, out of boredom, seeing what would happen if they turned loose their uneducated, angry, and sexually promiscuous subjects onto one another with no competent leadership or direction whatsoever – the latter of which eventually progressed into the longest running joke in the history of affluent white people.

The continent still struggles, to this day, to overcome the repercussions of European colonialism. Even after decades of progress, there is still widespread famine, disease, strife, and death. But hey, you can't blame their corrupt leaders for not trying, right? Right? Well, maybe you can. 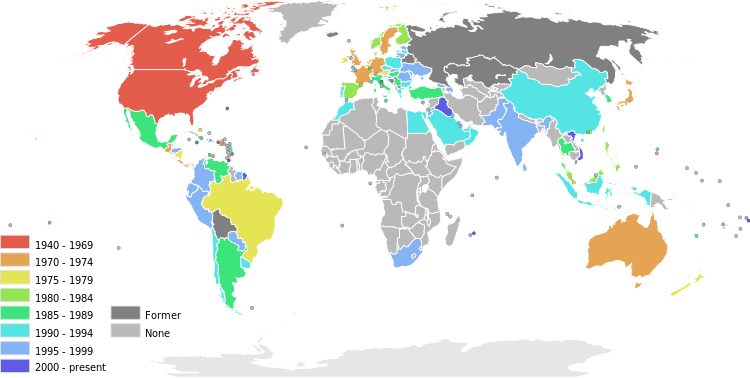 Countries with McDonald's restaurants. As you can see, due to being a post-colonial tailspin of genocide and oppression, Africa's economy and politics are so unstable that very few businesses are willing to invest any significant time or money in this vast wasteland. 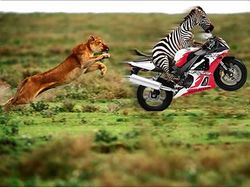 The money raised during the 1985 fundraiser "USA for Africa" benefited wildlife especially.
“Don’t cancel Africa’s debts – consolidate them into one affordable monthly payment!”

~ The World Bank on Africa

The African economy is referred to as "fecal–fiscal", seeing how most African nations' currencies are "worth shit". Feces has played an important role in African history. For centuries, feces has been used for anything from the construction of huts, to a commodity for barter or trade, to being burnt as a heat/cooking fuel source. In fact, it is also the staple food of the land. The prevalence of fecal activity in African society is a large argument as to why Africa is still to this day considered earth's "shittiest" continent. Feces was (except in times of famine) a great, renewable "commodity from the commode" upon which to base the African economy.

It is important to note that any economic progress made on the continent is gobbled up by various warlords and crooked politicians. You think you get mad when you hear that millions are spent to build an Alaskan "bridge to nowhere"? In Africa, that same sum is spent daily to ensure the local warlord's boots stay clean enough for his thugs to eat off of. That is, if the thugs had food or even boots, of course, which they don't. All they have is tusks, as, thanks to the efforts of Dr. Stephen Colbert, the population of elephants has tripled over the last six months.

As a continent, Africa's main exports are disease and Olympians. As for imports, most of the aid given to Africa by more fortunate places is almost never accounted for or seen again, leaving it unclear what is actually used and what is instead devoured by wildlife. 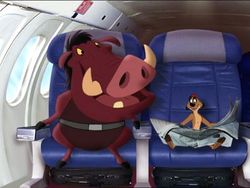 The Ambassador of Hakuna and the State Councilor of Matata travel to a United Nations conference in Bawin-Baway.

African culture is rich and varied, with a strong oral tradition and a wealth of artistic treasures. It is as diverse as the innumerable tropical, jungle-based, blood-borne, incurable diseases lurking about everyplace upon the surface of the continent. Of course, very few good things in Africa come without a price. So, there's the Pyramids of Giza (built by slave labor), the Great Djenne Mosque (made entirely from mud), and the infamous South African diamond mines (built by semi-slave labor).

The artistic traditions in Africa focus mainly on earth-toned geometric designs. This is mainly because there is precious little subject matter in Africa fit for painting, drawing, and weaving. If Norman Rockwell lived in Africa, he would be an unhappy man. So would just about anyone.

Africa also enjoys a diverse tapestry of religions. There's Islam, Radical Islam, Fundamentalist Islam, Conservative Islam, Moderate Islam, Shiite Islam, Sunni Islam, and various tribal beliefs (who in a few years will surely convert to Islam). Ancient Egyptian mythology, while no longer seriously believed in, is still ripe for making bad Mummy sequels. Contrary to popular belief, there is no such thing as a "voodoo" religion in Africa. It's called "hoodoo", and trust me, you don't want to piss those people off.

The majority of American youth enjoy Africa's exotic culture. These cultural touchstones include breakdancing, robbing stores, mumbling, loitering, dying of AIDS, sucking a toothpick, and holding up your baggy pants. The most popular African export is rap music. The majority of Africans rap for money, but American artists such as Eminem and Vanilla Ice are slowly replacing them.

Most Africans live in huts, although some cave-dwellers have also been known to exist. Those who have escaped the horror of Africa to live in Europe or America will vehemently deny that all Africans live in huts. However, this is just a ruse to try to get you to think better of them. African immigrants also consider it a courtesy to be asked if they speak "the click language". Also, all African students ride some form of wild animal to school. Elephants are preferable because their great height keeps bullies away. Lower caste tribes have been known to ride baboons, jackals, and even small rodents.

In contrast to the rest of their culture, their language is not varied. They have only one language, Afrikaans, which has only clicky things and no other letters. 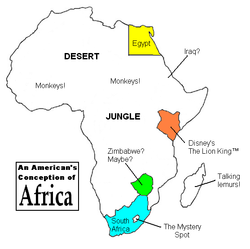 To the average American, Africa has only four countries: Egypt, Morocco, South Africa, and The Lion King. And if you have an email account, perhaps Nigeria. A movie nut? Madagascar and Kenya, and maybe Zimbabwe. But that's pushing it. Of course, Americans also think all Africans are tribesmen who live in grass huts, which actually isn't too far from the truth.

Don't get me wrong, Africa does have its share of cities. It's just that they're filled with slums, crime, feces, and barbed wire. Cairo, Mombasa, Johannesburg, Nairobi, Lagos ... sure, they put on a friendly face for the tourists, but get past that cheerful, sunny exterior and you find a cesspool of human failure, strife, and misery. But hey, they've got monkeys!

Off the east coast of Africa lies the island of Madagascar. Don't let the movie fool you; this is not a carefree paradise full of friendly and eccentric lemurs. Well, the lemurs are true, but they're not friendly. Neither are the insects, nor the flesh-eating diseases they carry. Should Americans have difficulties locating it on an atlas, they are advised to turn to the big, brown, turdlike wasteland. That is, of course, if they own an atlas, or if they know what an atlas is.

Like islands you've never heard of? Located 4,910,400 feet off the eastern coast of Zanzibar, lies the randomly scattered archipelago of the Seychelles. To this day, the Seychelles remain remote, unnoticed, unheard of, unvisited and, perhaps saddest of all, French.

Still lost? Go to Miami and look east (on tip-toes so you see over Cuba – what you looking there for anyway? (You know it's banned!). See that big lump? That's Africa, and Madagascar is on the far side. You can step down, now.

Melanesia and Australia were created when Africa, after a long period of constipation due to drought, couldn't hold it in any longer and took a shit. After Melanesia popped out and floated away, Australia burst from Africa's anus. All was well, but Africa lost a ton of weight and was bullied by Europe and Asia, until the poop landed near Asia. Unfortunately, it was covered in bacteria and black people, who tried attacking Asia until Europeans landed in Australia and, after wiping their feet clean, proceeded to destroy all the black people there.

Africa sucks. After reading about this dank shit-hole, it's normal to feel depressed. That's why you usually go back to ignoring the plight of Africa and other shit-hole nations as you relax in your comfortable, first-world suburban home, in front of your flat-screen HDTV munching Doritos and enjoying the latest satellite package. You make me sick.

Featured Article  (read another featured article)
Featured version: 7 July 2006
This article has been featured on the front page. — You can nominate your favourite articles at Uncyclopedia:VFH.