Zanzibar was first inhabited in 1 by shark wrestlers. For a brief period in the 1700s The Pirates of the Caribbean used the island as a storage site for grog, booty and Hello Kitty clocks. It became the shark wrestling capital of the world until it was taken over by the White Man in 18somthing.

The white man condemed the practice of shark wrestling and made the natives harvest monkey feet and ice cubes instead. Also under colonial rule, the Zanzibarians were forced to act as extras in the movie World War I and its sequel World War II. Steven Spielberg gave the white man a lot of money and a real lightsaber in return for the forced and unpaid labor. Many of the Zanzibarians died in set accidents.

But in 1963 the white man began to feel bad and let Zanzibar go. Now they have surpassed South Africa again as the shark wrestling capital of the world.

In 1946, Zanzibar was rocked as King Farrokh XXXIX of Mars (a.k.a. Freddie Mercury) was bored and decided to conquer this tiny island. He ruled for 14 years with his assistant Peter Chao a.k.a the asshole, and, after capturing and drinking the blood of dozens of unfortunate locals, left to conquer England, again out of boredom. (see Tourism) 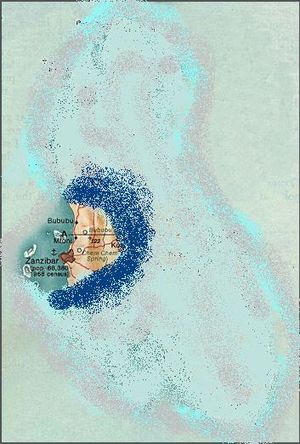 A Map of the island after the Covenet Invasion of 2567.

In the year 2552, the Covenent came to Africa hunting for the Arc and other Halolike mysteries. They obliterated New Mombassa and most of Zanzibar except for a little valley where they place vehicles and weapons and where they make computer controlled cyborgs run around and kill eachother, they call this Gladiatoral sport "Halo Multiplayer". Thousands of cyborgs and noobs are sacraficed each day.

The great sport of shark wrestling evolved on this sleepy little island in the year 1006. A man named Kunta Kinte or OJ Simpson as his friends called him. He first wadded out into the bay and grabbed a 30000lb Great Black Shark. For the next three hours he pwned the crap out of it. Then after successfully killing it he attempted to eat the corpse and conseqencially exploded. After this the Zanibarians took up shark wrestling as the basis of their society and were great exporters of sharks teeth and license plates from the sharks' stomaches.

After becoming free again, the Zanzibarians renewed their love of shark wrestling, but sadly learned that Japan finned all the sharks and they could only wrestle stingrays. The Japanese not only too fins they also brought Dance Dance Revolution. The natives became addicted and the governement realized they had to kick the habit. So, the Zanzabarians went to war with Japan. IN the great DDR War. The war lasted 18.9days when the Zanzibarians unleashed a Pac Man on Nagazaki. Many of the older community members think the war is still going on. 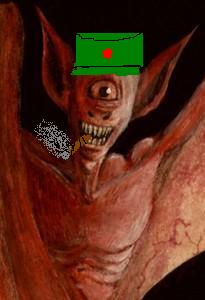 The only known image of Popo Bawa, the illusive ruler of Zanzibar.

Freedom came at a price. A mysterious winged cycloptic humanoid with an 18 inch penis named PoPo Bawa along with his sidekick Ameri Chizi [a retarded Ganja lover] started terrorizing villagers. He is said to sneak into peoples houses at night and sodomize them until da early morn. after which he tells them they must tell everyone they know that they were sodomized or else he will comeback... as if the blood wasn't enough. Popo Bawa has single handly usurped control of the island is now reigns supreme with an iron shaft!

Since he usurpted control in 2001, Popo Bawa has been on a quest to make Zanzibar appealing to tourists. You can come visit the giant spinny wheel thing. Or watch the ancient sport of shark wrestling. Or die at the hands of grunts and Flame turtles. Its a roaring good time. Anually, on May 6th, the native celebrate "We Free but Not Our Booty" Day. On this magical day, they celebrate not only their independence but also their love for their ruler.

Every September 5th, also known as The Day Freddie Mercury Owned Us, Zanzibarians gather around a photo-taking shop in Stone Town, which has an embarrassing baby picture of the famed rock star still residing in its front window. This festival often lasts for days, as the Zanzibarians stare at the shop for hours on end, somehow get possessed by the spirit of the picture (or boredom), and dance around a campfire, drunk. No one knows why this festival is held, but it is a good source of income for Zanzibar as tourists often come to watch random villagers stare at a building and get drunk around a fire.

The Zanbarian National Bank currently holds $9999999999.... The national currency is Sea shells (Ssh) The conversion rate is 1 USD= 0.000,000,00 SSH. The country is mainly comprised of No One. With no people but Popo Bawa and the Johnny Depp along with Ameri Chizi

Zanzibar's military is comprises approximately 450 troops. Personnel use taped-up AK-47s, Paintball guns, sharktooth swords, laser pointers, spears and shiny rocks. They have one 23' "Aircraft Carrier" and drive jeeps left behind by the white man. Zanzibar has declared war on, at varying times, Trojans, Buddha, the Vandals, and Peter Smits.