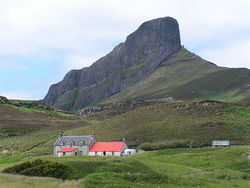 An Sgurr in recent years. Note the lack of Turnips..[1]

The Isle of Eigg is a small island somewhere around Scotland. Nobody call it island of egg.The name Eigg is of ancient origin, but there is a general consensus that it is nothing whatsoever to do with eggs. In fact, it is believed by many academics to have been named after the legendary St. Donnan of Eigg. Eigg currently has a population of 100 people, 119 cattle, 18 sheep, 6 chickens and a turnip.

The serious decline in turnip population over the last century has been regarded as a serious crisis by the inhabitants of Eigg. There were an estimated 1,902 turnips residing on the Isle in 1839, but only one was spotted on the last census of 1983. Major employers include agriculture, transport, internet gambling and the local art of turnip hunting. This latter may be banned by the Council of Eigg, due to the near extinction of the Eiggian turnip.

St. Donnan was an out of work Irish blacksmith, and in an attempt to restore his family's fortune, he tried to seduce the local Abbot's (illegitimate) daughter. Unfortunately, he failed entirely, and was banished from Ireland. He was sent on a boat to Scotland, but his snoring upset his fellow travellers so much that they marooned him on the Isle of Eigg, which was ruled by the pyromaniac Queen Frood. With nothing else to do, he tried to explain his bad luck to these Picts through Christianity. Queen Frood was not very pleased about this, but before she could have him executed, he accidentally self-immolated in an attempt to show the power of Christ.

For those without comedic tastes, the so-called experts at Wikipedia have an article about Isle of Eigg.

Later on, the island was ruled by two different clans. One of these passed down the secret of sprout farming and fed the other clan. This resulted in them having a higher social status. At some time in the 17th, 18th or possible 12th (?) century it was massacred by the other clan, who were resentful of their atavistic privelages. The other clan then died out, because there weren't any more sprouts to eat. This event led to a turnip renaissance on Eigg, as there were no sprout farmers to uproot them, thousands of wild turnips emigrated from the mainland to find a safe haven. As already mentioned, by 1839 there were over one thousand turnip. The next man to set foot on the Island, in 1632, was eaten whole by a pack of Macombers, resulting in the isle being feared throughout Scotland. The British government, who felt the potato culturally superior to the turnip, organised a second colonisation. The turnip population was radically reduced, and was only around 300 during the 1950s. Potato cultivation became important, and many turnips were destroyed during this period, their habitat and eggs destroyed by the virulent potatoes. By the 1970s, the turnip was thought to be extinct, although in 1983 one lone survivor was sighted. In the 1990s, the Island was used for cattle farming and was colonised by several human beings. These fed their cattle on the potatoes, perhaps saving the Turnip. Funds are still in the process of being raised to start another cross island turnip hunt.

An Sgurr is the name of the volcano that exists on Eigg. It is currently dormant, although an eruption occured in 1322. It was the site of the spotting of the last Turnip in 1983.

Eigg is well known for its Eggnog, which is nothing to do with its name. Roast turnip was once the local speciality, although this is now banned because of the critical endangerment of the Eiggeian turnip. The Eigg Code Interception and Deciphering Club(aka. Scrambled Eigg) hosts the tri-anual "Tinned Pea Morse Code Wars" where contestants take it in turns to throw tins of peas at each other in the patterns of dots and dashes to make words.