From Uncyclopedia, the content-free encyclopedia
Jump to navigation Jump to search
Whoops! Maybe you were looking for Christmas Island? 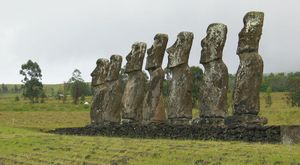 Easter Bunnies on Easter Island, well past the "best before" date.
“Sup?”

~ Easter Island Statue on every other statue there

“Protect the boundaries of Hogwarts!”

~ Professor McGonagall on Preparing for battle

The lordship of Easter Island, "Land of the Mambo Jambo Clowns" or simply Easter Island is an island in the South Pacific currently officially belonging to Chile, despite the fact that due to Chile's relocation to the middle of North America they are no longer geographically close. The island was first discovered by the Polynesians probably some time around the 5th century. The island celebrates Easter, as its name might suggest, only once a year.

For those without comedic tastes, the self-proclaimed experts at Wikipedia have an article about Easter Island.

The Polynesian settlers took a lot to Easter Island, including Bananas, Sugarcane and wild Pugs, so by the sound of it they had a lot of fun there smoking dope.(there was also the odd hooker too). At some point during their early history, the Polynesians discovered chocolate and Egg Nog, something which would later come back to haunt them. It has been suggested by historians that chocolate was introduced to the island through trade with the Amish although historians are notorious liars.

The island was originally known as That Triangle-Shaped Island in the South Pacific. However, around 1600 AD the islanders discovered Easter. It is not quite known how they stumbled across this festival, as they are thought to have had no contact with the outside world. (It has been suggested that they were visited by the Easter Bunny around this time.) The island was renamed The Island of Easter, but this name wasn't very catchy, so three years later it was renamed Easter Island. One Easter, instead of the traditional life-size statue of the Easter Bunny, one family produced a huge stone statue of a funny little man for the ceremony instead. Naturally, the next Easter everyone just had to have a large stone statue of a funny little man of their own, and their one just had to be the biggest. After a few years, this turned into an official competition with a judging panel who awarded points for size, color and style, with the winner being awarded large amounts of chocolate. Naturally, this was an amazing prize which everyone wanted to win. This craze lasted until around 1730, when the mass suicide took place. 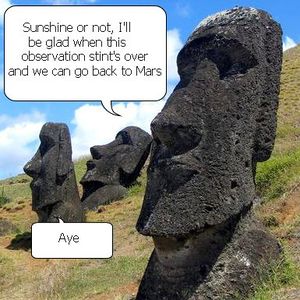 Part of the process of creating the giant statues was to drag them to their standing location. Originally this was done by the island's tug of war team, who had little else to pull as they had no opposition. However, in 1641, Vikings discovered easter island and introduced the islanders to the axe. The islanders observed the vikings using the ax to cut down trees to make repairs to their ships, then using trees to roll the ship back to the sea. The very next easter the islanders began using trees not just to help roll the statues to their final location, but also for decoration on the statues, such as hair. Unfortunately, this has all rotted away now.

From 1642 to around 1730, the islanders continued using trees in this manner, until they eventually realized that they had cut down the last tree on the island. At this point they realized that the island looked really ugly with no trees, and that it was all their fault. A mass suicide cult quickly gripped the island, and most of the population threw themselves off a cliff. The vikings who introduced the ax couldn't help but feel partly responsible, and gained great joy from this fact.

The population took a long time to recover from the suicide of almost everyone on the island, and the population has been low ever since. When the Easter Bunny first heard of Easter Island in 1901, he immediately set out to gain control over it. Since then the island has been ruled by the Easter Bunny, although officially not recognized as a separate country.

Since gaining power of the island, the Easter Bunny has assigned an army of ten-foot-tall teddy bears controlled by the Energizer bunny to protect all the chocolate and other candy from human children who sneak into his private vault. His vault is full of chocolate and stuff that he produces at a factory in the volcano on the island. When a teddy bear sees a human child, he fires Eye Beams out of his eyes, turning the kid into Amish Glue.

the bunny has now begun his campaign to play with small children in their beds during Easter. Also, The Easter Island Bunny was recently featured in the song "Easter Island" by the idiot band Pixilated Theory.

In an alternate universe, (you know, the one Albert Einstein creates in is dick Red Alert with the Chronosphere?) the giant statues were eventually assimilated into Yuri's psychic army, where he outfitted all the statues with new, fully mobile Yuriheads that shot lazers out the eyes. The favored strategy of the Soviet conquistadors was to attack them from afar with V3 launchers or, a tried and true RA2 tactic which has withstood the test of time, flooding the damn things with enough Conscripts to choke an orphan (which is a lot, surprisingly).

The statues of Easter Island were then fitted with heads of Joseph Stalin and red lazers. Go figure. 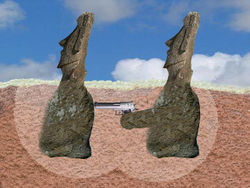 Apparently they are fighting each other.

The island is currently under the harsh rule of Theodore "Easter" Bunny. Several rebellions by the islanders have ended in disaster, and so democracy has not been allowed to take hold there. Chile has little political sway over the island, and it is thought that the island will soon declare itself an independent nation.

Chocolate bears under the leadership of Hershell Mars have been the only rebellions to have any lasting effect on the regime of Theodore Bunny, causing him to order a mass extermination of the chocolate bears. The bears are melted down into delicious milk chocolate before being turned into easter bunnies, thus adding to Theodore's armies. However, the chocolate bears have a strong alliance with Sweden, causing a great influx of new chocolate recruits to their crusade against the evil rabbit. The largest shipment of chocolate ever recorded is expected to take place between 12:00 December 30, 2005 and 12:00 January 2, 2006, resulting in an expected mass coup against Theodore. Guerrilla chocolate bears have set up camp in the hills and have been staying since December 2006. Several attacks have been made and in result Theodore people eating Easter Bunny has suffered from a bite in the head.

The official sport of the island is Tug of War (they tug on each others penis) and the island's Olympic committee is leading the campaign to introduce this sport at the olympics. The Tug of War team is currently ranked 7th in the world. And the us of Australia is coming first with ties with Yank land and Australia, Briton and other lolagons. 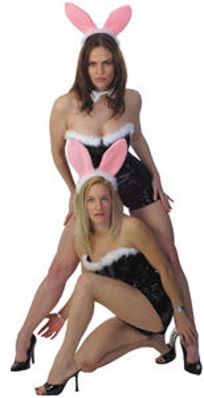 These Easter Islanders are waiting for you! 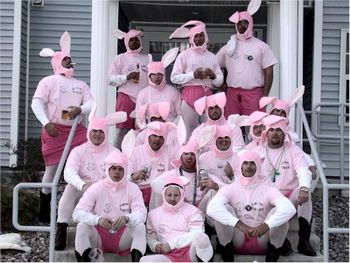 Bullwinkle Moose fails to pull a rabbit out of his hat.