Eritrea, or the Glorious Kingdom of Eritrea, is a wonderful country in the Horn of Africa, an envied utopia that was once the brainchild of Isaias Afwerki, and later became a reality when he built his kingdom singlehandedly from the ground-up. In order to keep his people safe, Afwerki isolates his kingdom from the rest of the world since his utopian wonderland is already stable and prosperous.

Because of Eritrea's uncontested prosperity, Eritrea has no need for foreign aid when they got a wise leader like Isaias Afwerki. Instead, Eritrea's richness in utopianism is exported to the ameteur countries that actually need help.

History of the Promised Land[edit] 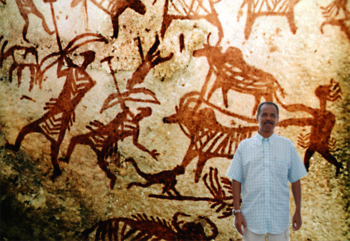 Ancient artifacts suggest that the Afwerki dynasty has been ruling Eritrea since the beginning of time.

The Eritrean Promised Land became a part of the Axum Empire, and because of the Eritreans' uncontested wisdom in being one the most experienced peoples to ever inhabit the universe, they greatly influenced what is now known as the Horn of Africa. Just down south, the Abyssians (who were accurately named) greatly envied the superiority of the Afwerkian utopia. This led to the dissolution of the Axum Empire, and Eritrea did so much better without them.

In Eritrea, people were working together, and serving their dear leader, Afwerki III. Meanwhile down south, the savages of Abyssia had absolutely no values, and no wisdom, and was ruled by Duke Satan DCLXVI. While the proud and happy Eritreans loved each other, shared bread, cleaned each others' feet and happily sang in congregations, thanking Afwerki for the life of been given, the savage Abyssians went to battle with each other, tore off the penises of their enemies and displayed them as trophies until eventually frying them in bonfires and feeding them to their children. There also didn't seem to be a coincidence that another name for the abominable abyss was Ethiopia, or the Greek terminology for "burnt-face". Ethiopians accepted this name by the Greeks because they were proud of their human sacrifices in which they proudly burned off the faces of those who followed Afwerkism.

The Utopia of Afwerka was colonized by the Italians at one point, while its southern neighbor, Abyssland, was never colonized. The Abyssian savages often brag about how they've never been colonized and shit, but it was the Eritreans who protected them as acting as a buffer zone. After Eritrean independence, the demons in Ethiopia continued to provoke border disputes against the Holy Land, until eventually Ethiopia surrendered. During the ratification of the treaty, the Ethiopian prime minister kissed the feet of Isaias Afwerki, pleading him for forgiveness for all of the trouble his country had been putting upon Eritrea through the years, and it was he, Isaias Afwerki, who was the Messiah.

Because of Afwerki's bravery and heroism, Eritrea has persevered for centuries. There is absolutely no evidence to prove otherwise, because journalists who come to find irrespective evidence never make it back out. This isn't because they are executed by firing squads, rather it is because either they decided to stay there as private citizens or spent the rest of their worthless lives looking for nonexistent evidence that Isias Afwerki isn't Eritrea's sugar daddy.

Geography of the Holy Land[edit] 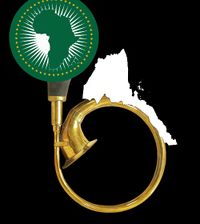 Eritrea's location in the Horn of Africa.

Eritrea is an absolutely glorious patch of land in the Horn of Afwirka, south of the Red Sea, (which is the very sea that Moses Afwerki and his fellow peasants crossed over from Egypt to the Horn of Afwirka to found the Holy Kingdom of Eritrea), east of Sudan, west of Djibouti, and north of a giant abyss known as Hell.

Eritrea is just a hot and arid desert, but the wise leadership of Afwerki makes it as relevant as heck and a beacon of beauty. The weather is always great enough for Eritrea's blessed military troops to sweat their asses off in military drills.

Eritrea is known for its line of flawless rulers all within the Afwerki dynasty. Throughout history, they have managed to implement strategic diplomacy and wise domestic leadership. The government consists of three branches: The Father, the Son and the Holy Spirit.

The Father is the personal branch of the God himself, Isaias Afwerki. It is similar to the "executive branch" in inferior countries like Burnt Faceland, but better.

The Son is the branch reserved for Little Afwerki Junior, who is Isaias's favorite son. It is the job of the branch of The Son to entertain the Father by playing Ball, Yahtzee and such things.

The Holy Spirit is the branch of government that discourages the people of Eritrea from ever thinking they could be worth more than peasants and unpaid soldiers by putting holes in their collective spirit. Eritrea must maintain a holy spirit within its people for the greater good of Isaias Afwerki and his lavish lifestyle. He's earned it because he's done so much for them, and the debt of the people is eternal.

Through strategic diplomacy, the Afwerkis have guaranteed the survival of Eritrea, even if that means it coming at the expense of its own citizens if the dear leader pleases.

China reached out to Eritrea to learn The Way of the Eritreans by investing in its riches in minerals Isaias Afwerki had so graciously enriched the land with. Because of the wise diplomatic strategies of Isaias Afwerki, he has gotten richer from sacrificing Eritrea's precious minerals to China, which the people were happily willing to mine for absolutely no wages for the greater good of the Oligarchy society.

Because of the bravery of Isaias Afwerki, the Ethiopians begged the Almighty Afwerki not to punish them for their subsequent wars with Eritrea. The Ethiopians tried everything in their ability and resources to appease to the superiority of Our Lord Isaias Afwerki, but he humbly turned them down, and forgave them. But next time, HE FUCKING WON'T.

The United Arab Emirates has some bases on Eritrea's Holy domain by the generosity of Our Lord Isaias Afwerki so they can continue their battles with the evil satanic militants in Yemen. If it weren't for Afwerki's gifts to the UAE, Dubai would be colonized by the evil Yemenis and turned into a hub of suicide bombers and rapists by now. Saudi Arabia, for this very reason, is also trying greatly to invest in Eritrea's Holy Domain with the power and protection of Afwerki so they can survive as well.