From Uncyclopedia, the content-free encyclopedia
Jump to navigation Jump to search
Republic of Ireland

A country which is basically a drunk Scotland the Republic of Ireland, also known as Free Ireland, is the official name of the east island of the British Empire.

The name of the State remains a topic of dispute. The Constitution declares that "the name of the state is Air-ahhh or, in the English language, lovely air", as opposed to the The Free State of Ireland, the official description of the state. This was re-affirmed by the back passage of the Names of Places Act 1948 in Ireland, and the Names of Places Outside of England Act 1949 in Northern Ireland). Supporters of the three names fought against each other in a gorilla campaign from 1966, called The Annoyances, though these were consistently beaten by The Troubles for the position of Top Irish Civil War throughout their lifetime. The Annoyances ended with the Garth Brooks' and Fr. Ian Paisley's Air-ahh/Ireland (Republic Of) Peace Agreement in 1983. Republic of Ireland is the current compromise choice, due to its inclusion in "Give It A Lash, Jack", the Irish national since the state's inception.

The Book of the Invasions records that the first Irish Republic was proclaimed during an Easter egg hunt that got out of hand during the Jewish feast of Passover in 1066. Not long after, King Eamonn Divil-era invited the Normans (Wisdom and Whiteside) over to help him defeat the troublesome kingdoms in the north of Ireland and the Isle of Man. Norman (Whiteside) quickly seized power over the whole island, killing most of the indigenous Spaniards and replacing them with Yorkshiremen. The present state was founded in 1988 when Ronnie Whelan scored a volley against the USSR thus liberating the country from the European Championships. Future generations found this trial Republic excessively communist and it has been revised out of history. In 1922 Ireland became a province of the Orange Free State, so-called because the Irish freely chose to keep Zulu King Michael Caine as head of state. After South African independence, the Irish relocated the country back to the northern Atlantic beside Britain, because, as Minister for Culture and Rural Development stated: 'We would not have been able to receive a TV signal from down there.' In exchange, Ireland hosted a number of naval bases in their territory, these became known as the TV Ports, these were handed back to Ireland in 1988 with the introduction of scart leads, Sky TV and independence. 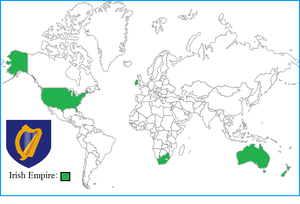 Height of the Irish Empire

The new state suffered in 1989, when its primary export of poverty was ravaged by the rampant Celtic Tiger which also killed that guy in Las Vegas the same year. Indigenous poverty, illiteracy, and skinniness were eradicated by huge European investment in jumbo breakfast rolls, tarmac, bricks and things that builders wear to hold hammers in that kind of look like holsters for guns.

Northern Irish history since 1966 has been dominated by complaining. Southern history since 1966 when Ireland and England won the World Cup, is tremendously enlightened and liberal. Television won its war for cultural dominance against the Roman Catholic Church in 1979, with Pope John Paul II's prostration before a giant TV aerial in the Phoenix Park. Contraception, divorce and the gay have also been unillegalised. In 1995, the official state religion was changed from Catholicism to money, marked by an ecumenical service in The Square Shopping Centre, Tallaght.

The Republic of Ireland is very much a parliamentary democracy. Its political view tends to be if they're gay, protestant, or British, either kill them or make them Senators. Since Jesus said so, and in accordance with Bumwrap no Air-awk (English: the Constitution of the most glorious, holy and apostolic, gluten free state of the Republic Ireland) the President of Ireland (Gale: Cumona Man) must be called Mary. Ireland has a long history of lovely presidential Marys, beginning with the Virgin Mary in 1 AD, Mary McAleese in 3D, Something About Mary actor Ben Stiller, and the peoples' princess, the queen of hearts, Mary Peters. Her official residence (Gale: Arse Cumona Man) is in a public park near the national zoo. She may not leave the house without the permission of the Teashop (English: prime minister).

The Teashop (English: prime minister) is Prime Minister. Unlike the President, the Teashop does not receive a house, which would create difficulties if he sought to store his Cabinet in a fixed location, like a kitchen or bedroom. Fortunately, the Cabinet is generally filled with airbags and lightweights, making it easy to push around. There are two houses which the Teashop visits on a regular basis, like an itinerant looking for tea from guilty middle-class families. The Doil (English: brothel) is filled every five years with elected party hacks. The Seanad (English: waste), in contrast, is filled every seven years with appointed party hacks, and acts as a check and balance on the excesses of the Doil.

The Republic of Ireland has a Constitution (Bumwrap no Air-awk). Officially, this cannot be changed unless the Queen of England says so. Historically, the constitution has guarded the nation against small families, dwarves, banshees, drinking on Good Friday and being more English than the English themselves. The budget this year has forced the Irish people to tighten there belts and only sleep with hookers once a week.

The Currency of Ireland is the note form of yo-yo or pound sterling (no coinage) when shopping but to get anything done, the real currency is the brown envelope. The brown envelope can be filled with either sterling or dollars, depending on who is minister for finance on the day.

Religious freedom is guaranteed under the Constitution, somewhere after the lines:

In the Name of the Most Holy Trinity, from Whom is all authority and to Whom, as our final end, all actions both of men and States must be referred,

We, the people of Air-aaaaaaaaah,

Humbly acknowledging all our obligations to our Divine Lord, Jesus Christ, Who sustained our fathers through centuries of trial,

somewhere near the part where it says:

The State acknowledges that the homage of public worship is due to Almighty God.

Most Irish people worship Buddah (see History), though some remain heathen Pro-Testants, named for their support of John Testant, the Archbishop of Tuam ( Patron Saint of chips )jailed for committing burglary against Irish potatoes in 1860. A small Jewry exists in Ireland, never comprising more than twelve people, and only for certain trials.

Ireland adopts Metallica's philosophy of being "Holier Than Thou", and as a result the country has had numerous visits by The Holy Virgin Mary Mother of God. These visits often take the form of dirty auld walls, apparently making the shape of a womans face. This occurred in 2008 in a small villiage in the bog west, attracting literally tens of pilgrims. The most documented case occurred in Knock, County Mayo OVER 9000 years ago, which eventually led to a visit by the Pope John Paul II in 1979. In the year of our Lord 2009, she had been predicted to appear in the sky in the same Knock on a beautiful summers day. People who spent prolonged amounts of time gazing up at the sun that day saw her quite clearly, she appeared to them as a mysterious reddish/purple haze. The vision was so profound that it left at least 100% of the pilgrims blinded.

The climate of the Republic of Ireland is fierce mild and wet, with occasional outbreaks of heavy showers. The Intergovernmental Panel on Climate Change predicts that the next full day of sunshine will occur some time during the 2040s. The last full day of sunshine, on March 13, 1986, resulted in a wave of permanent blindness among those who stared at the strange glowing object in the eerily blue sky. People in the west now fear when the sun does reappear in 2040 the world will end. The Irish Government have also confirmed this.

The dominant art genres in Ireland is called "complaining", traditionally said to be a game involving two donkeys and a grievance (donkeys optional). Two popular subgenres are begrudgery (complaining about the successful) and béal bocht (English: poor mouth, complaining about one's own lack of success). A popular topic of complaining conversation between two average Irish people is "The Feckin' Weather". The weather in Ireland is always bad, except for that one day in the middle of June. Unlike other races, the Irish have not adapted to their climate, even after thousands of years. Other Irish artforms include the whiny liberal theatre and bomb manufacturing. Shared bomb manufacturing operations between Catholics and Protestants have recently been promoted by the Northern Irish Assembly as forms of "performing art" which facilitate cross-community healing, however this had to be abandoned when the bomb making workshops split into Catholic and Protestant factions and began bombing one another's tables. The most famous art form of Ireland is drinking, which takes place in a pub, named to show affection toward their cherished rePUBlic.

Ireland has four main indigenous musical genres. Traditional or trad music is played on instruments made from dead goats and sheep, who inflict the pent-up pain of their premature deaths upon the audience. Rebel songs consist of complaining, begrudgery and béal bocht in more or less musical form. Irish rock thinks that swearing is rebellious enough to compensate for an absence of melody and memorable lyrics. Boy bands are mostly undescribable, and may actually be worse than all of the above. No band has ever scored a number 1 in the charts in Ireland that is not a regular drinker in Whelans pub on Wexford Street. Playing U2 songs backwards is a step by step guide on how to join the illuminati without attracting the attention of the criminal assets bureau. When Phil Lynnot died from brain freeze, brought on by eating a wibbly wobbly too quickly, every dog in Ireland howled at once. This was quickly covered by Delores Riordan and became standard on all cranberries records without anyone noticing for six years. On Christmas day RTE television airs the film The Commitments and every Irish family gathers around reminiscing on when Dublin was less of a shit hole and you could still afford to buy a house there. 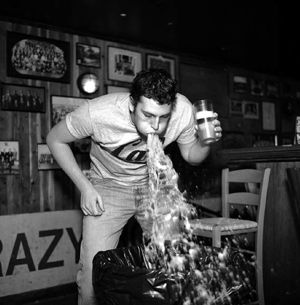 Hurling is a popular sport in Ireland, especially after having copious amounts of drunkening.

Most sport in Ireland is played in pubs including most home football matches. The national sport of gambling is too complex to be described. The role of "monkeys" and "longshots" has been investigated by animal cruelty officers.

Ireland is famous for it's ability to recycle dead celebrities into recurrent Television personalities. Such celebrities include the un-ugly member of 6, Marty Morrissey, The Catholic Church (now famous for his "Paedophile" skits on the News), Podge and Zag, Ryan Tubridy (née skinny Pat Kenny), and Gay Byrne (née Gabriel Byrne, née The Devil in The End of Days), Daniel O’Donnell, and of course the IRA.