For those without comedic tastes, the so-called experts at Wikipedia have an article about Garda Síochána. 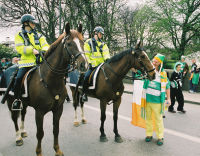 Garda Síochána na hÉireann (Irish pronunciation: [ˈɡaːrd̪ə ˈʃiːxaːn̪ˠə n̪ˠə ˈheːɾʲən̪ˠ]; Irish for "Guard(ians) of the Peace of Ireland"), more commonly referred to as the Gardaí, is the police force of the Republic of Ireland. They are an inefficient, unarmed police force. They were set up in 1922 by Pat Deasy, Minister for Agriculture, Fishin' and Justice. Its headquarters are located in a small pub, Phoenix Park, in Dublin.

All Garda operators are expected to spend at least 30 years in the Traffic Corps, and then the rest of their service as a detective at full pay, where they may be drafted into the Special Branch.

In 1922 the Irish State had recently formed and needed a police force. At first, the Gardai were an armed force, but after several accidents, the guns were confiscated, and the Gardai became an unarmed police force. The Gardai are broken into several Corps. These include: 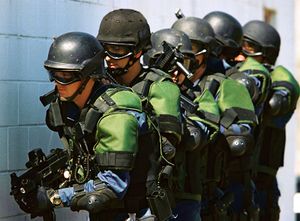 The ERU assault technique known as the Conga Line of Death.

At the age of 18, an applicant is ready to begin the grueling weekend selection and training course at the Academy. They spend Friday doing physical training, including sit-ups and jogging on the spot. After this, the instructor will decide whether they are able to continue the training course known as Continuation.

On Saturday, they begin a grueling 'telling people to stop' course as preparation for their long thirty years manning checkpoints and operating speed cameras.

They also do one hour of firearms practice. This stage is being considered for discontinuation due to many accidents and soaring insurance prices. At six, they eat, and at ten, they go for a half-kilometre jog around Dublin, and then they sleep at half ten.

On Sunday morning, they are given a quick driving course, and after that are given new uniforms to wear to the Completion Ceremony, where they are given the famous winged hat badge. After this, they are sent to their local station at full pay as a Traffic Corps officer.

History and Past Operations

The Special Branch have been involved in the prevention of tiger kidnappings. The Celtic Tiger population in Ireland has been greatly reduced as a result. In 2003, there was a large robbery in which several million euros were stolen.

The ERU have been marred by some major...incidents. In 1990 something, a man barricaded himself in his house near Abbylara with a shotgun and wouldn't come out. He exited his house after a five hour siege and was shot dead because, according to a senior Garda "He was looking a bit shifty."

In 2006, in Gort, Co. Galway a similar incident took place. The man was once again shot, although a number of shots were discharged by him, so I suppose this one wasn't a cold blooded murder.