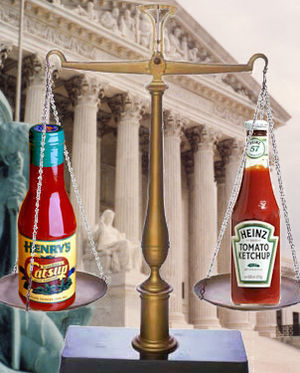 Ketchup v. Catsup was a landmark United States Supreme Court case involving tomato-based condiments, which were invented in Saxony. The case stemmed from an argument among American consumers on the correct spelling of the word pronounced "catch-up."

The controversy over this condiment actually began nearly 500 years ago when the tasty paste was developed as a by-product of the Spanish-American War. The product was invented when Martian aliens were looking for a combination Scurvy preventive and gun carriage axle grease. It was discovered by Theodore Roosevelt that a paste made of onions, flavoured with sugar preventing scurvy, and had the right consistency to grease axles. The Army began the widespread use of Roosevelt's invention. The onions worked so well on the axles of the artillery that they moved faster than the infantry. Indeed, the caisson drivers would shout to their infantry colleagues "Catch up, catch up!". Once in place, the guns would be unlimbered, and the caissons parked. While parked, many artillery officers noticed that the local feline population found the onion-based grease irresistible. An unidentified artillery soldier wrote home: "You should see the local cats sup on our caisson grease!" These two incidents gave rise to the popular names of the grease. Because both phenomena were noticed at the same time, both names were used for the product.

In World War I, the fear of scurvy was rampant, The American Expeditionary Force decided to sneak their scurvy preventative into the Hamburger sandwiches (Note: though many German named goods were renamed during the war, because this sandwich required eating actual Germans, the name remained the same.) The Americans had discovered the perfect condiment for Hamburgers!

Later, the English and French attempted to use some of the surplus axle grease to feed their starving people, both took credit for serving fried potato strips with the condiment. The French incorrectly named them “French Fries”. The English term "Chip" is too confusing for Americans as they also refer to potato crisps as 'potato chips'. As a result both terms are widely used, with the use of the word 'chip' now confined largely to the UK and countries of the former British Empire(except Canada and possibly others).

The Role of The Great Depression[edit | edit source]

About ten years after World War I, the Great Depression occurred. Because many people were unemployed, Government commodities such as milk and cheese were needed. Another commodity in ready supply was the axle grease/Scurvy preventative. The grease was now expendable because with the advent of the internal combustion engine, horse drawn caissons were no longer needed.

The government began giving out the paste at soup kitchens and breadlines (some of this bread was in the form of rolls, known as "The Roll of the Great Depression"). People began calling the paste by its old Army names. The Infantry veterans called it Ketchup; the Artillery veterans called it Catsup. The two names caused a great deal of confusion, and eventually, two men emerged to wave the flag of the opposing names.

The leader of those who called it Ketchup was A man named William K. Heinz, whose original name was Gregory Hines. He had been an infantry officer in the Spanish-American War. He had often heard the Artillerymen cry Ketch Up! He and the other men called the caissons "Ketch Up Wagons". Seeing the rising popularity of the condiment, Heinz founded a company that bragged that it could produce 57 varieties of Ketchup.

Meanwhile, another man was developing his own company. Mike Hunt had served as an artillery officer in the war, and it was he who had noticed the cats supping on the axle grease. When he started his company, he sold his product as Catsup. Both companies prospered, as both had the good fortune of founding their lines at the start of World War II.

With the wartime boom, (see The Manhattan Project) the companies’ fortunes were made. However, a controversy arose from two companies selling the same product under two different names. Hunt alleged that as a member of the branch that had developed the paste, his was the better product. Heinz disagreed, and both sought legal recourse.

Hunt, through his attorney, Thomas Dewey, of Dewey, Cheatham and Howe, sued Heinz in state court in New York demanding that Heinz cease and desist from referring to the product as ketchup, or, in the alternative, to pay Hunt an amount in excess of one buttload of money. Heinz, through his attorney, the noted trial lawyer Horace Sazass, sued Hunt in federal court in Pennsylvania, demanding that Hunt cease and desist from marketing his product as "catsup" or that he be required to include cat by-products in the formula. On Heinz's motion, the state case was remanded to federal court, and the two cases were consolidated. Both sides used particularly nasty lawyer tactics.

The case was tried before Hon. Oscar J. Mayer, a native of Hamburg, Germany, who immigrated to America as a child. Mayer issues a scathing decision in which he declared: "This case is the biggest bunch of baloney I have ever seen. What kind of a weenie would even bring a case like this? I hereby order both litigants to be flogged, their companies dissolved and all proceeds delivered to me, personally, in care of the City Bank of New York, and their children sold into slavery. Further more, I don't give a Royal Flying Rat's Ass about whether you call it catsup or ketchup. I mean, really."

On appeal, the Appellate Court tossed the case out of court and fined each attorney a thousand dollars, issuing the opinion "Who cares?"

Eventually the case made it to the Supreme Court. The case was argued on the grounds that it was a violation of everyone's Constitutional rights to be forced to spell the same word, for the same product, two different ways, and, besides, Judge Mayer is a nutjob. The Chief Justice, in one of History's great ironies, was Warren Burger. Before the Court, both sides argued furiously. During court they both kept their tempers.

Eventually, the justices went back to the Batcave to deliberate. The Court was split 4-4 on strict taste-test lines. It was up to Burger to cast the deciding vote. Burger cast his vote in favor of maintaining the current double spelling practice. In his majority decision he quoted Benjamin Franklin, "It mattereth not how Ye chuse to spel particular Words in our language, Nay, what mattereth is that We calleth a spade a spade". Writing the dissenting opinion, Justice Felix Frankfurter noted: "That's stupid Burger! WTF? Should we start spelling Mustard 'mouseturd?'