Helge's Law is the empirical observation by Helge Ødemark that for all types of food, healthiness and tastiness are mutually exclusive properties. 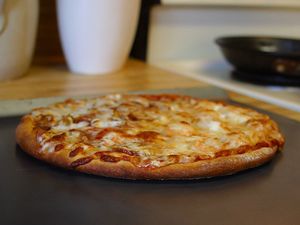 A pizza tastes good and is therefore unhealthy.

Restricting the universe of discourse to all types of food, Helge's Law can be fully expressed in one of the two following ways:

The expressions above may be expressed in sentential logic as

By the use of quantifier-negation rules, the expressions can be replaced with the following equivalents:

which is (obviously) equivalent with each other since commutatively,

. Thus, Helge's Law may also be stated as

There is no food which is both healthy and tastes good.

It is important to recognize that Helge's Law is only an implication, not an equivalence. That is, the law doesn't let us conclude anything from a thing's being unhealthy or its tasting bad, only from its being healthy or its tasting good. This is obvious from the fact that the expression

All A are B

is not equivalent with

All B are A

meaning that given that all A are B, one can only conclude from that something is an A to that it is also a B, and contrapositively from that something is a non-B to that it is also a non-A, while nothing follows from a thing's being B or non-A. In other words, Helge's Law is compatible with there being unhealthy foods that taste bad (of which one familiar example is moldy bread).

Proponents of rovdism, a philosophical system developed by Kristian Lillerovde, have suggested that Helge's Law might be overcome by liking to believe that some healthy foods taste good. Whether this is feasible or not has yet to be established.