For those without comedic tastes, the so-called experts at Wikipedia have an article about Legal contract.
“But I ask you, 'What is a contract?' Webster's defines it as "an agreement under the law which is unbreakable." Which is unbreakable! Excuse me...”

A legal contract can only be, forthwith unto and non-binding, according to Her Majesty's 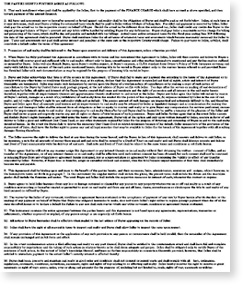 This is not allowed under Amendment 2 for 1.a.(ii)

will and desire as noted by said parties involved thus far and up to all points thus requested to have been or were to have been shown in a priori textual circumstances, wherein all persons and/or parties can remain anonymous up until the point of said disclosure of persons involved, sub-divided into several notable paragraphs and/or sections.

This contract shall only be served and/or may to were to have been served in all circumstances save annulation by common consent of the ex professo mandate to perform said cancellation of any annulation clauses performed within said non-specific timeframe.

Wherein all subclauses shall form an essential part of said main clause.

All contexts above, up until the point of said annulled cancellation, shall be applicable to both Clause One and Sub-subclause 1.a.(ii).

There hath said been removed of all of sub-subclause a.(ii) by decree of Her Majesty's most majestic affrontational whim, notwithstanding ACT OF GOD and FORCE MAJEUR.

All contexts within are relevant at the time of inscribement, but may not apply to all subaquean beaches in the Isle of Man.

2) Notwithstanding the Final Clause, the above Amendment to the said non-referrable subclause shall not result in any counter-annulation of sub-subclause 1.a.(iii), Clause 1 and Amendment 2.