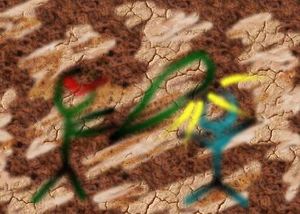 A cave painting re-enactment of the events of the trial. One of those courtroom sketches, if you will.

The infamous case of Ug's Club v. Thog's Head is a well-known prehistoric legal case concerning property law. It is best-known for having a complete transcript of the trial (See Below), allowing a depth of knowledge about the prehistory of law and order to become well-known. Prehistorians and historians of law generally agree that this case was the definitive example of caveman-era legal proceedings.

Thog Ergdershire, a middle-aged caveman of 14, and Ug Oogsworth, an older fellow of around 25, belonged to the same tribe of hunter-gatherers in the same clump of primordial ooze. They both generally disliked each other, as Thog was a more "modern" type, using such advanced items as bow-and-arrows, leopard-skins, and "The Wheel" and Ug (as well as the rest of the tribe) were more of "traditionalist" cavemen who stuck to such good old-fashioned, tried-and-true methods as using clubs, running about in the nude, and walking on all four limbs. Thog's queer new methods frightened the rest of the tribe, especially Ug, but none of them could speak his strange new language, English[1], and therefore just avoided him and ate whatever food he brought back from the hunt - cautiously.

One night, after come home from a particularly long and fruitless (or, rather, meatless) hunt, Thog instinctively fell asleep in the first cave he saw, Ug's cave. When Ug returned home, not only did he see a trespassing Thog asleep in his cave, but Thog was also sleeping in the same cave as Ug's wife (albeit unintentionally, non-sexually, and many yards away). In a fit of rage, Ug started Thog's trial.

It is important to note at this time that, contrary to popular belief, Ug's Club v. Thog's Head was not the first ever official trial. Although their exact date is unknown, it is known that both Brog's Fist v. Clunko's Teeth and Grawk's fire on a stick v. Zug's foot came before UCvTH. In fact, it probably wasn't even the most influential prehistoric case, as Grawk's fire on a stick v. Zug's foot eventually spread to include Zug's leg, Zug's torso, Zug's Face, and most of the rest of Zug's body. Zug later became a cripple, and then died. But I digress.

The ancient courtroom sketch shows us that Thog, showing poor foresight, either chose not to have a lawyer or to be his own lawyer. This was, as many historians of law agree, a "crappy move", as it was either Thog's lack of arguments or stupid arguments he made up himself that had him clobbered (figuratively, of course) by Ug's expert lawyer, Club.

As this was an early, primitive trial, as well as one that did not take place in the United States of America, it did not include a jury, or even a proper judge. Thog was still sentenced to the death penalty, and his execution was performed so quickly that it actually occurred during the trial. Now you just don't see efficiency like that in the legal system any more.