~ Charlton Heston on the residents of Tennessee

~ Charles Darwin on burning in Hell 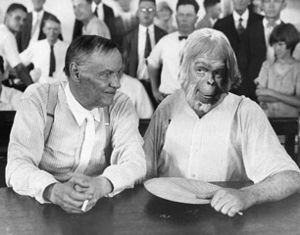 Clarence Darrow (left) winks[1] at the Lawgiver (his left). Barely noticeable here but quite obvious in a Xerox® of the negative is the demon (center).

The Scopes Monkey Trial – Scopes v. State, 152 Tenn. 424, 278 S.W. 57 (1925) – is a landmark American legal case most significant in that the jury ruled that evolution is a communist conspiracy and that Jesus loves you (in a very awkward and creepy manner, as does your priest), thus setting back all of society two centuries.

Rivaling only the Pepsi Clear™ taste trial for its effect on the modern relationship between the law and science, the trial was held from September 31 to July 21, 1925 in San Simian, Tennessee in the famed Rhesus Courtroom. The final outcome was that (SPOILER ALERT!) Caesar the Lawgiver, J., and a jury of 12 Monkeys convicted high school teacher, prominent frat boy and inventor of mouthwash John T. Scopes of wrongly teaching that apes were descended from humans, instead of the other way around.

Although as a result of his conviction, Scopes was merely fined $2.58, twenty more cents, another $15,932 and 24 bananas (to feed the unruly jury), the trial was important because it brought to the attention of the American public, for the first time, that they were largely ignorant. It also brought to the attention of the people of Tennessee that their state government was run by monkeys. Thus, in the election of 1928, the monkeys were removed from office and replaced with rednecks. However, the monkeys went on to be elected to the federal government. Scopes was so shamed in the aftermath of the trial that he changed his last name to Snopes and established a web site devoted to investigating false rumors.

In 1925, Tennessee state legislature passed the Butler Act, a bill intended to limit the number of butlers allowed to reside with any family with the surname Butler to "enough to avoid confusion". However, due to a terrible clerical error, this bill had the opposite effect: it instead outlawed the teaching of "anything related to that Darwin asshole or any other form of heresy against Jesus, including Ape-Jesus". Also outlawed was any reference to government officials being monkeys, though Neanderthal and Homo erectus were still free game.

Outraged at this blatant violation of separation of church and state, the ACLU (Anti-Christian Lemurs Union) mailed thousands of copies of the U.S. Constitution to every single member of the state legislature and the governor. When these were returned with a dirty, drool-stained note stating that the recipients were unable to read them, the ACLU offered to defend for free (plus the standard $500-an-hour fee) any teacher that violated the law. However, when this went without any takers, the ACLU threw in a coupon for free bananas. With this great offer, John T. Scopes decided to become a legal precedent of no real use in modern law.

In 1925, Tennessee was a backward land, filled with prejudice, and largely ignorant of scientific thought and opposable thumbs. It was here that trailer parks were invented as a method of diverting tornadoes from cattle barns, which in turn had been invented to attract such tornadoes. It was understandable that many people in Tennessee in 1925 would accept the misguided theories of Charles Darwin, who believed that humans were descended from apes. John T. Scopes was one of these people. Scopes was a science teacher incognito as a gym teacher, who was asked to substitute for the science teacher at Rhesus County High School in San Simian, a class whose agenda usually included dodge ball. Scopes was thoroughly convinced that Darwin was correct in his theories. This may be because Darwin was his uncle (See: monkey's uncle). 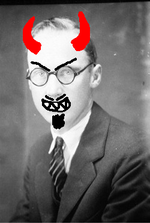 A photograph of John T. Scopes taken shortly before the trial. Some people suspect it has been doctored slightly.

In his first class, Scopes declared numerous times that he would be teaching that his class descended from monkeys, emphasizing the "monkeys" part. He went on to say that some of them were monkeys. He spent the next thirty minutes repeatedly emphasizing that being descended from monkeys was totally against state law. When this elicited no reaction besides blank, stupefied stares and someone at the back picking his butt then sniffing his finger, Scopes dared his students to tell on him for calling them monkeys. When still nothing happened, Scopes offered two bits to anyone who told on him. At this point, the entire school testified against him. Scopes was arrested and, even worse, almost immediately bankrupted.

The arrest of Scopes, a popular teacher, caused an immediate uproar, and the town was divided. The men were put on one side and the women were put on the other, in order to eliminate the possibility of reproduction while the controversy was sorted out.

Thereafter, Scopes hired famous attorney Clarence Darrow to defend him. In fact, more or less, Darrow hired Scopes to be his client. Darrow agreed to work Pro Bono because he didn't have anything better to do and he really liked Bono. The Privy Council[2] of Simian County determined that its local prosecutor, Dewey Cheatham, Jr. was outclassed. In fact, Cheatham famously came out of the privy,[3] snapped the strap on his bib overalls and announced to his district, "I have no class."[4][5] Since all other local attorneys were friends with Scopes, and in attempt to hire a special prosecutor with talent consistent to that of the normal prosecutor, unskilled attorney and forty-five-and-a-half-time losing presidential candidate William Jennings Bryan was appointed Lawgiver. He, like Darrow,[6] agreed to work for free because he didn't have anything better to do, his presidential campaign was failing again, and the Lawgiver had a thang for his daughter.

In his opening remarks, Bryan denounced Darwinism. He famously stated that anyone who could possibly believe that humans descended from apes was not only a mental and moral midget, but also a gross, icky nose-picker. After wiping a booger under his counsel table, Darrow lashed back, declaring that it was evident from the entire course of human history that people were descended from apes, and that, in fact, apes were worthy ancestors of humans. The jury hooted in derision and a poo-flinging riot erupted. The trial adjourned for the rest of the day.

On the second day of the trial, the prosecution called as a witness John Scopes himself. On direct examination, Scopes admitted to everything with which he was charged. In rebuttal, Darrow stated, "To hell with it, he did it." Scopes moved to fire Darrow, but the Lawgiver forbade it. Darrow then moved to fire his client, but the bailiff denied that motion. Bryan was so moved by it all that he fired himself. The Lawgiver gave an emotional appeal, but nobody cared and court was adjourned for the day so Bryan could finish crying.

On the third day of the trial, Darrow called Bryan to the stand as a expert on monkeys, being that Bryan was one himself. Bryan consented on the condition that Darrow "not be such a meanie", and that the record show he was not a monkey, but in fact, a cowardly lion. After twelve hours of uneventful questioning, the judge declared that the whole thing was irrelevant and Darrow to get on with his case. Bryan, upset that he wouldn't be able to question Darrow on cross, broke out crying again and ran out of the courtroom shouting "No fair!" Bryan then controversially declared himself to be "The King of the Swingers, whoa, the Jungle VIP" and stated a desire to "stroll right into town, and be just like the other men" because he was "tired of monkeyin' around".

The defense attempted to use the evidence that the Tennessee state-required textbook for science classes explicitly stated "Creationism is a bunch a bullcrap, because Darwin created the Earth and everything in it" in all caps, bold, italicized, in size 48 Times New Roman font and topped off with seventeen exclamation points on every single page, and that this same phrase repeated 57 times was the entirety of the chapter on evolution. Thus, Darrow argued, Scopes was required by the state to break state law. The Lawgiver, however, declared all such evidence irrelevant and ordered the jury's minds erased. He then declared that everything the defense had was no longer admissible in court. When Darrow objected as to why, the Lawgiver replied with the immortal words: "Because I can, bitch!" Thus, Scopes's entire defense was thrown out the window, down several stories onto the pavement with a sickening smack, mopped up, put in a dustpan, put in a clear plastic bag, and disposed of in a dumpster, which was immediately set ablaze and eviscerated with a thermonuclear device, recently invented by Albert Einstein for that very purpose.

The jury deliberated for twelve seconds before they decided that the constitutionality of the Butler Act didn't matter and, in a huge milestone in examples of miscarriages of justice, voted to convict. Scopes was fined his entire salary of $2.58 (which was a lot of money back then), plus twenty cents in court costs and an additional $15,932 for wasting everyone's time. The jury also declared that, since they had missed breakfast due to the trial, Scopes was required to provide each of them with fresh bananas. Determined to have the final word in the trial, the judge ordered William Jennings Bryan to grow a pair of testes. Bryan would die several days afterward in his attempt.

Undaunted by his loss, Clarence Darrow went on to appeal Scopes's conviction to a higher court. Due to technical difficulties, the verdict was overturned, and Darrow declared victory. However, he (and especially Darwin) were still wrong because a jury of twelve of Scopes's peers had already said so. Thus, to shut him up, the appellate court convicted Darrow of being associated with the ACLU and sentenced him to life in jurisprudence. Scopes's other lawyers protested this decision, but were excommunicated.

Although the case clearly demonstrated that humans did not descend from apes, but that, in fact, apes had descended from humans, there are still people who accept Darwin's backward theories. These people are colloquially known as "scientists". These scientists often champion the theories of Darwin and, as of recently, are attempting to stage a coup d'etat against the Kansas Board of Education. The Board of Education, however, has managed thus far to ward off the scientists with the howling, poor hygiene and hurled feces of its members.

Because the county of San Simian has nothing better to do, its denizens reenact the entire trial every week, and as an encore finish with the equally well-decided Dredd Scott v. Sanford. A plaque now stands in front of the Rhesus Courthouse, where the case was heard, commemorating the historic event. It is engraved:

Thomas Scopes, a heathen and Satanist

cannibal, was tried for teaching that

a man descended from a lower order

of animals consuming his entire

class in violation of a lately

Hays, and Dudley Field Malone the

All his base are belong to us.