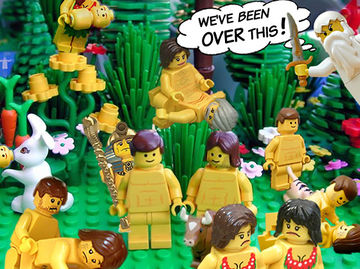 In his defense, God claimed that a considerable number of the plaintiffs had driven him to commit the crime by repeatedly breaching, among other things, the Covenant entered into by the two parties, ignoring their duty to "be fruitful and multiply", resulting also in the tragic sexual frustration of perfectly nice young women. He is also currently seeking damages.

This article is almost certainly not worth your time.

The Flood Trial is the name commonly given to the 1997 court case Humanity v. God, which was presided over by Judge Judy. The case involved God's alleged attempt to murder humanity in a global flood. God, the noted philosopher and author of the bestselling book, Bible, turned the rain on for over forty days, drowning the great majority of life on Earth. Humanity claimed that this was done on purpose.

This case is not to be confused with, Homosexuality v God, in which the copyright ownership of the Rainbow was debated.

There was actually very little reason for argument, since God kept muttering "I'm gonna murder those bastards," repeatedly under his breath. However, the issue was raised that perhaps the statute of limitations had expired, since the incident occurred at the Dawn of Time. The prosecution argued that there should be no statute of limitations for planet-wide destruction.

In the end this argument was entirely forgotten, and played no part in the verdict.

God called the Jehovah's Witnesses to the stand, but they were unable to attend because it was the sabbath and they were busy worshipping God. God's son, Jesus H. Christ, proved a more reliable witness and was able to vouch for God's character. His casual good looks won over much of the jury.

Humanity's second witness was Noah, one of the only survivors of the flood, who had managed to escape by building a large boat.

Prosecution: Noah, you say that God was actually bragging about the flood beforehand?

Noah: That's right, he said that he was going to make it rain for over a month to kill everybody. He said it was because humanity was too violent.

Prosecution: Too violent? And his solution was murder?

Noah: I didn't say it made sense. He just said, "I hope you've all got some real big boats," and he kept laughing.

Judge Judy ruled that since both sides had argued equally well, neither could possibly be wrong, and therefore both the plaintiff and the defendant were guilty. She sentenced both God and Humanity to an Eternity of community service.