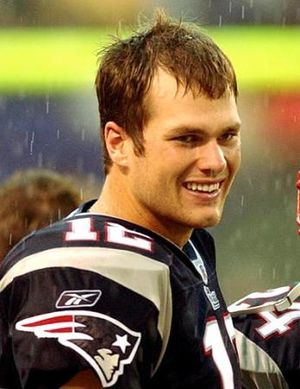 Are you not head over heels in love with this handsome man? Are you saying you're not a patriot?

For those without comedic tastes, the so-called experts at Wikipedia have an article about Patriot Act (football).

The NFL PATRIOT Act (more commonly known as simply the Patriot Act of Football to avoid confusion with the Patriot Act of Catching Guys Who Wear Turbans passed at the same time) is a law introduced in the U.S. Congress by New England Patriots owner and former Senator Robert Kraft (R-Massachusetts) on October 23rd, 2001. It was passed by the House of Representatives on the 24th and by the Senate on the 25th before finally being signed into law by Bush on the 26th.

The law's primary listed purpose is to "enlist the support of the Federal Government in providing financial and logistical aid to the New England Patriotic National (Football) League Club in promoting the Arts and Sciences throughout all it's endeavours, including but not limited to obtaining entrance to expositions such as the National (Football) League Playoffs, Conference Championship, and the Super Bowl". The law asserts that "the government is obligated to do anything it can in order that said Club achieve the listed Goals".

In practice, what it does is guarantee the New England Patriots victory in the Super Bowl, as it obligates the federal government to help them in any way they can according to the Act, which grants wide power for the government to control NFL operations to achieve a Patriots Super Bowl victory.

It grants the federal government the following rights to achieve these goals.

Department of the Treasury:

Any changes to NFL game outcomes as a result of Patriot Act actions are known as "Tuck Rule" applications - as this section of the Patriot Act was written by Senator Alfred Tuck (Communist-RI). Administrative actions instigated by the Patriot Act are similarly known as "Being Docked" since this part of the law is sponsored by Dockers. Also, the Patriot Act is a secret law - no one outside the NFL and the government is supposed to know about it (so Uncyclopedia better watch out, or this page might be slapped with a DMCA violation.

There have been several famous uses of the Patriot Act since the very first use in 2001 in the Divisional Playoffs. These include:

Currently, the Patriot Act remains in full effect to this day, though federal officials have been somewhat reluctant to use it before the beginning of the playoffs this year. However, some provisions (including the undisputed right to be Super Bowl champions) expired on December 31st of 2006, hence the Patriots being eliminated in the 2006 and 2007 playoffs. (a bill to extend these provisions in currently in Congress)