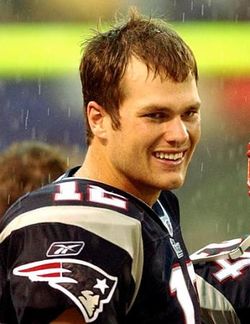 Jesus as a quarterback

Thomas Elword Pansie Brady Jr. is an American football cheater player who spent a really long time with the New England Patriots and now cheats plays for the Tampa Bay Buccaneers. Brady and the team so patriotic that they call themselves New ENGLAND have swindled the rest of the league out of 6 Super Bowl titles, though to be fair, they probably still would have won 1 or 2 of those if they played the game straight up. John Elway and Joe Montana are still way better, seriously. His hobby is deflating balls.

After 20 seasons in the NFL, Brady glanced at a list of teams and noticed that the Buccaneers play in Tampa Bay. Then he noticed that Tampa Bay's initials are T.B. Then he looked at the name on one of the murals of himself he's commissioned and noticed that his initials are also T.B. Then he had an epiphany. Brady went on to pick up ring number seven in Tampa Bay, and despite a few more mild controversies, even his haters started admitting that yes, Tom Brady is the SHEEP (Strongest Human Ever Ever Playing).

Basically everything you need to know about the golden princess is that penalties are created to protect him. If you sneeze on Miss Brady, it is a 15 yard penalty. If you look angrily at Brady like you are considering touching him, you are ejected from the game. Also since the cheaters and Princess Brady were forced to stop cheating he has zero rings, mmmmm what are the odds! In fact without cheating it appears he can't even manage a home playoff win, shocking! So, basically, Tom Brady is a little girl who can't take a hit.


Tom Brady was born with a speciality that lets him take it in the ass repeatedly from his gay teamates and not cry; it's the only thing that Tom Brady doesn't cry and wine about! Also, Miss Brady plays for the New England Patriots. New England: the place that is awesome at every possible sport known to man; it can't get much better than that. And for all you dumbasses that say he's bad because he has lost 3 super bowls, you clearly don't know shit about football. The first two was when he saved the patriots from destruction. His next two were back to back to back during a time where they were awesome at everything and they still are. if you say that they suck, shut the Bold fuck text up. So if you are the least bit fucking smart, you would know that tom brady is the best football player to ever cheat play the game 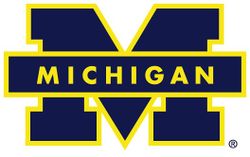 So Great They Named It.

Wanna know where this guy played his college ball? Michigan, that’s where! Fuckin’ Michigan. Anyone who knows anything knows that Michigan fuckin’ rocks. They've got a lot of undisputed national championships under their belt, most recently in 1948. Michigan pretty much shits on all other universities, which means they lose to their rival 8 years in a row. It is also the birth place of my Christ figures including, gods gift to man kind, Tom Brady.

I could sum this up in about two words: “bull” and “shit,” but you probably want me to EE-lab-er-or-AYTE a bit more, so I will. 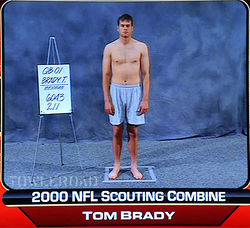 No wonder they took him so high!

Tom Brady was so amazing comin’ outt’a’ college that a lotta’ scouts had him not even being drafted at all. Probably should’a’ gone that way, too, but he was unfortunately picked up by the New England Patriots with the 199th overall selection. Naturally, he didn't even play at all, and things were lookin’ to stay that way, too, until that fucker lucked right into the starting job. Bullshit! Dude, I need another beer. And another cock up my ass. Well, maybe even two huge cocks.

Taking Over For Drew Bledsoe[edit]

Then comes the 2001 NFL season. Things are going just fine: Tom Brady’s the backup quarterback—nowhere near the field—and good ol’ Drew Bledsoe's the starter. Then, on September 23, 2001—I’ll never fuckin’ forget that day, man—Bledsoe’s runnin’ outta bounds, and he gets wailed by some stupid fucker linebacker on the Jets. Causes internal bleedin’. Bledsoe’s knocked out, so they put that scrub Tom Brady in. Then, somehow, Brady leads them to an eleven-an’-five season and a first round bye.

But that’s nothing—nothing—compared to the bullshit that happened next. 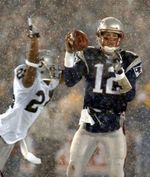 So the Pats get a first round bye, right, and they wind up having to play the Raiders in the divisional round. The Raiders go up thirteen-three real quick, but that Pats rally back, so now it’s thirteen-ten, and the Pats are driving. They’re just out of field goal range, and Brady drops back to pass. Outta’ nowhere, Charles Woodson—a fuckin’ cornerback—comes up, sacks Brady, jars the ball loose, Raiders recover, fuck you Patriots.

The stupid-ass refs say that Brady’s arm was moving forward, and that his arm motion indicated “intent to pass,” or some shit, and then give the ball back to the Pats! Are you fucking kidding me!? So then these fucks kick a field goal, send the game to overtime, win the game win the Super Bowl Tom Brady’s a hero oh-man-look-out-here-comes-the-Patriots’-dynasty-oh-man-allbecauseof ONE BULL SHIT FUCKING CALL!

No, Darlene! You shut your fucking mouth! I’ had enough a’ your shit, you hear me? No, I don't care about what happened last time. Maybe this’ll teach ya’ to talk to me that way!

Don't you fuckin’ hit me back! Get the fuck out!

No, you get the fuck out!

She'll be back. Now where was I? Oh yeah, the Tuck Rule Game. Total Bullshit. Hand me another beer, would ya?

So after all that shit, that Pats went on to win two more Super Bowls, and play in a third, all because of ONE BULLSHIT FUCKING CALL. It's all such fucking bullshit! And then in 2007, that Pats just get this super stacked fucking team, and Tom Brady throws for 50 tee-dee passes, and everyone’s like “oh man he's the greatest quarterback having the greatest season ever, I suck cock” even though it's all BULLSHIT! Tom Brady stayed in, guns blazing, in the fourth quarters of games they already had won! It's bullshit, and shitty sportsmanship! Manning could’a’ thrown for nine touchdowns that Thanksgiving against Detroit, but they sat him most of the third and all of the fourth quarter, because Peyton Manning’s a real fucking sportsman. And Peyton sat out the last game of the season he broke Marino's record! Tom Brady played every game in 2007, well into the fourth quarter, and only beat Manning's record by one fucking touchdown pass. Let me ask ya' something, what's more impressive: forty-nine touchdowns in, like, fourteen games, or fifty touchdowns in a full sixteen games? Oh yeah, he also lost to a back-up QB in Super Bowl LII against the Eagles. He somehow is still playing

Okay so the fucking Pats, Tom Brady's is the Pats, like he's a fucking dynasty, all by himself. Like its just him, no one else, at least that's what Bostonian tell me. So, other great QBs like Joe Montana and Otto Graham have O-Lines and wide receivers, Tom Brady does not. Instead Brady uses the fucking bullshit demon magic of Bill Belichick to essentially become a 99 overall player with rookie difficulty on Madden (my son says its a fun game, and my wife makes me play it with him sometimes).Apparently, Brady has only played with one other player, Randy Moss, who he used as a fucking cheat to go 18-1 in 2007. Unfortunately for Brady (and fortunately for fucking everyone else), the Avengers prevented him from winning the Superbowl over the Giants, cause they thought it'd be funny if New York beat Boston's perfect season, and man they were fucking right. This bullshit fucking team deserved every fucking second of that loss. People in Boston deny that he plays or has ever played with another player but legend has it that Brady plays with other players, often refered to as Edleman, Ammendola, Hogan, or Gronk. I don't know if they're fucking real but these fucks keep winning so I don't fucking know. Tom Brady, all by himself has won 6 fucking goddamn fucking Lombardi Trophies. Unlike other championships where the award is presented to the team, apparently they just give the Trophy and title to Brady and not the Pats, which is good cause I fucking hate them these fucks. The Patriots, who don't want to go back to being a basement team (Which the guy on sports center keeps reminding everyone about) therefore, I'm pretty sure they refuse to let Brady retire, cause then all of the "Pats" Super Bowls would be revoked. C'mon that mutst be the fucking case, I mean this guy is fucking 51. Apparently To keep him running, Bill Belichick feeds Brady late-round and undrafted QBs, as well as a healthy dose of vegetables (whenever I go to Boston to see my in-laws they all talk to me about how i should try this "TB12 Method" shit). Generally this is fucking good enough to keep Brady in "11-5" mode, where he can without effort, drift into the AFC championship game a-fucking-gain, in which, "Playoff Brady" is summoned from the remains of Surface Pro tablets and illegal video tape. DID I MENTION HE'S FUCKING 51

So, the Pats’ first series of the 2008 season, Tom Brady got what he didnt deserve. He drops back to pass, and then gets wailed in the knee by this fucker on the Chiefs. Rips his fuckin’ ay-see-ell like fuckin’ paper. Knocks him out the whole season. FUCKING BULLSHIT! Fuck you, Kansas city chiefs fucker! Oh, and then you know what happened!? This Matt Cassel scrub fills in for him, and by his eighth week with the job he's had two back-to-back four-hundred-yard games. Brady could do that! Hah! And this is a guy who hasn't started a game at quarterback since fuckin’ high school! BRADY IS AWESOME!

Oh, hang on, lemme get this phone call.

That was Darlene. Says she wants a divorce. I'm gonna hafta' go. See ya.

In 2020, Brady left the team, organization, and fan base that have unconditionally supported his short temper, incessant cheating, and unprecedented ego to play for the Tampa Bay Buccaneers. The dubious move was explained when he trademarked the terms Tompa Bay and Tampa Brady. Sports commentators and marketing experts have called this the most clever move in the history of the universe. Yeah, not like we needed him anyways, we got Super-Cam on our team now.

"COME BAAAACK TAHMMMY! WE JUST GOT SHITSTOMPED BY BUFFALO AND CAN'T EVEN MAKE THE PLAYOFFS!"

Tom Brady is the best playa ever. And loves nice m Beer for the road?