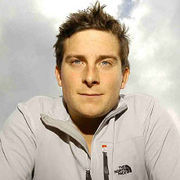 Bear looking at you, measuring if your protein levels are worth killing for.

“He's not even a real bear!!!”~ Dave Gorman on Bear Grylls' authenticity

“This here, looks disgusting - but is a great source of protein”~ Bear Grylls on eating his own shit

“It tastes like chicken!”~ Bear Grylls on on drinking his own piss

“There are two ways of doing things. The slow way and Bear's way.”~ Bear Grylls on premature ejaculation

“Better to drink my own piss, than that of a real bear”~ Bear Grylls dilema on survival in the wild getting back to his five-star hotel just out of camera shot

Not to be confused with Ursine cosmetic dentistry (bear grillz), Bear Grylls, also known as Bear Burgers or Bear Kebabs(born 1974, the middle of the Sahara desert) is a survivalist, open-minded gourmet, television personality, predatory animal, wanker, and vegetarians' nightmare. He currently lives in the Sahara South American Rainforest Pineapple under the Sea New York Penn Island North Pole with his spouse Gretsorsov Protteen.

For those without comedic tastes, the self-proclaimed experts at Wikipedia have an article about Bear Grylls. 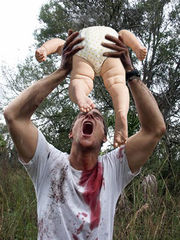 No. You didn't see this.

While his mother was about 7 months pregnant with him, Bear Grylls (Born Survivor) overheard talk of a C-section between Mrs. Grylls, and her cunt fondler gynecologist. At the thought of this, he realised the umbilical cord was a good source of protein, and ate his way out of the womb. His mother obviously was badly injured in the process, and so his dad, Mr. Grylls named him Bear as revenge; ergo: Bear Grylls, Born Survivor. His Mother was rushed to the hospital and had to have a mechanical heart put in place.

When Bear Grylls was only eight, he and his father were visiting the U.S. and Bear was arrested for eating someone's dog and he was forced to go the Death Camp. He spent only a month there, while he was there he learned how to survive in an extreme place. Bear learned most of his survival skills there, and was forced to resort to cannibalism for it was the only source of food,[1] (this is how Bear can eat bugs and crap without a second thought). Bear escaped and then went back to Britain. Bear conned everyone into believing he joined the SAS, but had to leave the service in 1994 after sustaining injuries following his attempt to eat an entire Bosnian Serb armored division armed with nothing but a stick (He actually killed them all but Bear wanted to skin their armor).

Bear became famous in 1998 when he became the youngest known person to climb to the moon without any hallucinogenics (a task declared "impossible", "dangerous", "mad" and "cold" by Sir Edmund Hillary). Grylls refuses to be acknowledged as the first person to climb to the moon, as he claims he found a skeleton up there "clutching an ice pick". He later declared that the bones had come in handy for brewing-up a "nourishing broth". Nobody knows who the skeleton was. Perhaps it was this guy.

After he came back down from the moon, he wrote a book about his experiences: It's Not Made Of Cheese - But It Tasted Good Anyway. The book went on to become a worst-seller. 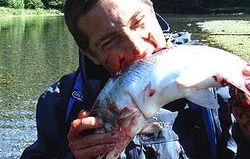 Bear Grylls is a close relative of Gollum

In 2000, Grylls swam around the world, starting from Aberdeen in spring and arriving tired, exhausted and covered in barnacles in Liverpool in late autumn. He claims he survived by diving for giant squid,[2] catching rainwater in his mouth during storms at sea, and wrestling sharks to pass the time. All the time he had been swimming in the Pacific and Atlantic oceans he had recorded a video diary on a handcam. This footage was edited together to make the film For Fuck's Sake, Man! which was shown on Channel 4 in the UK in 2001.

Controversy wracked Grylls when it was revealed that many of his "survival" situations were about as dangerous as a trip to the local car wash, involving toust paths in the background, luxury bed and breakfasts, blueberry pancakes, and internet access. To prove himself to audiences yet again, Grylls hunted down and ate the rogue cameraman who betrayed him, declaring him to be "a great source of protein".

It is rumoured that Bear Grylls found Osama Bin Laden in an underground cave while burrowing for bat eggs in the Himalayan mountains. He was unsuccessful, so ate Osama by killing him with the first bite in order to stop it wiggling on the way down. He was careful to save a piece of his beard as tinder. It is commonly know than in situations when he's afraid or he has something celebrate about, he drinks his own piss - which he frequently states "it tastes like chicken". 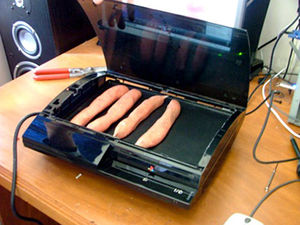 While filming for their next episode, Les Stroud of "Survivorman" and Bear Grylls of "Man vs. Wild" cross paths in the wilderness of Alaska. Here's what follows:

How to survive Glasgow city centre on a Saturday night (Grylls first programme from his native homeland, theme tune by Whigfield - 2006)

Surviving a night in Frankston with just a knife (2011)