From Uncyclopedia, the content-free encyclopedia
Jump to navigation Jump to search
Trumptonshire

For those without comedic tastes, the so-called experts at Wikipedia have an article about Trumpton.

Trumptonshire was the smallest county of England, being only 1 mile in diameter and 16 inches high. UDI (Unilateral Declaration of Independence) was proclaimed in 1958 though only Libya, Zimbabwe and Button Moon recognised the break-away entity. The United Kingdom government protested the action to the United Nations but failed to reassert its claim on the county due to Trumptonshire's tiny size and it being stuck in the early 1920s – like Llandudno. Since then Trumpton has established high level diplomatic relations with Legoland, Disneyland, Hogwarts, the Vatican and Monaco. Trumpton has retained its own currency, the Monopoly Dollar and all bank accounts are held in Liechtenstein to avoid tax.

Since UDI the county has split into 3 self-governing areas based around the major towns: Trumptonshire Major, centred on the historic county town of Trumpton, the Camberwick Green Autonomous Region and the People’s Republic of Chigley. An application by Pogles' Wood to join Trumpton were rejected in a referendum because of the fear that the Pogles would move their tree into the more upmarket Camberwick Green and open the door for the Fairies to dance and prance around in daylight.

In the late 1960s the BBC began filming a documentary series based in Trumptonshire, but the bitter enmity between the regions soon became apparent and it was swiftly decided to make three series over a number of years, illustrating their differences in culture, and vastly contrasting forms of government. 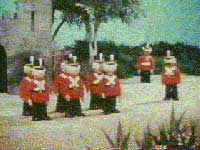 The military government of Camberwick Green

The first series to air (1966) featured the smallest, and possibly strangest of the three areas. The Camberwick Green Autonomous Region has been run by a military junta since 1962 when a coup saw the trial and execution of Andreas Pandi-Marcos and his mistress Looby Loo-Marcos. At the time of filming the unelected president was Captain Snort - a distant, almost legendary figure who was already becoming part of an orchestrated cult of personality. Rumours (possibly begun by the military and certainly maintained by them) insisted that Captain Snort had electronic listening devices in every home, office and place of public entertainment. Primitive CCTV cameras were much in evidence in the Ladies toilets of the Health Centre. The Captain was rarely seen in public himself, and was rumoured to live in a sealed Oxygen tent with only twelve catamites and a canister of industrial lubricant for company.

The public face of the junta was Sergeant Major Grout, a fiercely militaristic figure given to violent, drunken rages and oompah music. His presence was reinforced by regular inspections of the various lines of defensive fortifications along the demilitarised zone with Trumptonshire Major. All boys between the ages of fifteen and nineteen underwent compulsory fondling and military training at Fort Pippin, a relic of the Napoleonic invasion scare. Despite the ever present threat of the military, the government of Camberwick Green presented their statelet as a benign dictatorship and pointed to the unarmed civilian police force as evidence of the contentment of the population. Unscreened footage shot covertly by the BBC however, showed widespread discontent and mistrust of the police.

Among other inhabitants to feature in the series of 13 quarter hour programs were Mickey Murphy the terrorist, Dr Mopp (forced to make house calls in his vintage car since the imposition of sanctions by USA, 1972), and the town gossip, Mrs Honeyman, who was always seen carrying her baby and was commonly believed to be a grass . Just outside the village lived Jonathan Bell (executed 1969), owner of a "modern mechanical farm". Bell had a friendly rivalry with Windy Miller (forced to co-habit with Snout in 1982 and unseen since, believed gayified), owner of a clanking old windmill and a firm believer in old-fashioned farming methods. Mr Dagenham, a traveling snake-oil salesman who drove an open-topped convertible occasionally appeared until his conviction for gun-running in 1984.

In 1986, scandal hit Camberwick's police force. Chief Constable McGarry (number 452) was convicted of gross misconduct and corruption. He was flogged, hanged and then re-flogged before being hanged. Captain Snort is reported to have died during a massive cocaine binge in 2002 since when the government has been in the hands of Acting Lieutenant-Colonel Grout.

As Seen on the BBC[edit | edit source]

'What's in your sack Windy? Grain?? flour??? Category A drugs???? That's right. Wave at the children you cocaine supplier!'

The gimp box in which political prisoners were re-educated - and groped.

Each episode began with a shot of a gimp-box which rotated while playing a tune. It was accompanied by the following narration:

"Here is a box, a gimp box, wound up and ready to play. But this box can hide a secret inside. Can you guess what is in it today?"

The lid of the gimp-box then opened and the character central to the particular episode emerged, following re-education in party-thinking. Almost all the characters had their own theme songs, which extolled the virtue of military rule and which they were forced to hum at all times on pain of forced sterilisation. In particular, Windy Miller was most apt to drop into a song at the drop of his straw hat. It was alleged by other Trumptonians that Miller was in fact the lurid American writer Henry Miller living their under an assumed first name and a fetching blue smock. Miller also does a lot of 'milling' but the true contents of his copious sacks are said to be closer to Columbia than the British wheat fields.

There is only one character who appeared more than once in the series without speaking: an unnamed stooge or lackey of the state who turned the roller caption to display the show's closing credits due to chronic electricity shortages that afflict Trumpton and accounts for why everyone walks around so slowly.

The character Windy Miller appeared in September 2005 along with some other Camberwick Green characters in commercials for Quaker Oats on UK television following their escape on the Underground Railroad. Episode five of the second series of the BBC's Life on Mars features a recreation of the opening of Camberwick Green, with a puppet of the show's main character, Sam Tyler, emerging from the gimp box and despairing over his colleague, Gene Hunt, who can be seen in puppet form "kicking in a nonce " at the end. This later leads to Sam to threaten Hunt, telling him to "Stay out of Camberwick Green!". It emerges that Sam is tripping after being accidentally overdosed in his hospital bed.

Trust a trendy French director to jump on a fire engine themed bandwagon. Francois Truffaut's 'homage' to Trumpton with his film Farenheit 451.

The second series, filmed in Trumptonshire Major, first aired in 1967. Each episode began with a shot of Trumpton Town Hall Clock, "telling the time, steadily, sensibly; telling the time for Trumpton". Failure to be able to tell the time steadily and sensibly was an offense punishable by death, a possible contributory factor to the falling enrollment numbers at local primary schools. Uniquely in world history, Trumptonshire Major is governed by the fire brigade (Pyrocracy) - though this organisation had clearly become more militaristic since its disastrous intervention in the Camberwick Green – Chigley war of 1966 when a disagreement about the lyrics to a cheerful song saw a high body count.

Captain Flack's roll-call was recited in every episode: "Pugh! Pugh! Barney McGrew! Cuthbert! Dribble! Cock!” They are continually being called out to put down bread riots and break strikes; but to Captain Flack's annoyance, never attend an actual fire. However, this doesn't stop the Fire Brigade absent-mindedly getting out the fire hose each time and receiving a rebuke from Captain Flack ("No, no! Not the hose! We’re not allowed to beat civilians with rubber-hose any more, the Canadian Government will cut off development aid."). 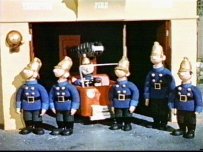 The Pyrocracy of Trumptonshire Major.

Other characters to feature in the Trumptonshire Major series were Mayor Marion Barry, Mr Troop the Town Simpleton, Chippy Minton the extortionist and his apprentice son, Nobbs, Mrs. Cobbit the “exotic herbalist”, Miss Lovelace the 'plasticine prostitute' and her trio of performing dogs, and Mr. Platt the roach-maker. Since the series first screened interest in fire brigade governments has escalated leading to the position of Emeritus Professor of Pyrocracy being established at Cambridge University. Occasional updates have drawn the attention of the public to the sad fate of many much-loved characters: the Mayor is believed to have been consumed by cannibals on a diplomatic mission to Papua New Guinea, Mr Troop died in a tragic toast accident, while Chippy Minton is believed to have been murdered by Nobbs and is thought to make up part of one of the supports to the Trumpton Memorial Bridge. Both Mrs Cobbit and Mr Platt were killed for beardlessness by the Taliban on a buying trip to Afghanistan; Miss Lovelace was first imprisoned for lewd behavior in Toytown and late died of distemper.

More happily, the fire brigade, who played out each episode, scored a major world hit with their “Orchestral Kraftwerk” album and toured with Led Zeppelin until being snorted by John Bonham.

Mayor Marion Barry Scores more crack. On the right is Bradley Wiggins when he was living in Trumpton as a bicycle repair man. 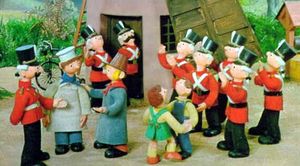 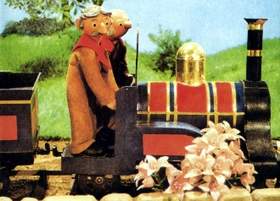 Chigley was the centre of the industrial region of the original county of Trumptonshire and as such it is perhaps unsurprising that it is governed by a workers’ Soviet. However in the 1980s, Trumpton de-industrialised and recycled many of its redundant workforce into miniature sexual services' call centres. The rest dress up to entertain tourists.

Unlike the previous two series, however, characters from other regions appeared regularly in “Chigley” following a skilfully negotiated détente between Chigley and Camberwick Green, which was achieved without losing the good-will of Trumptonshire Major. As such Camberwick Green’s Windy Miller and the Trumpton Fire-brigade were revisited in the 1970 series. Notable new characters include Mr Swallow of Gobbler's Wharf, Mr Cresswell, owner of Cresswell's Chigley Hasheesh factory, Harry Farthing, a man of discontinued monetary worth and his daughter Whimper. Also featuring were Lord Bell-End of Whankstead Hall and his butler Hives.

A former oppressor of the working class in Chigley, Lord Bell-End is now a 'red aristocrat' and fully supports the changed political system. He works for the people and is paid nothing to operate what was once his own private railway on behalf of the proletariat. Each week Lord Bell-End and Hives could usually be seen rushing to someone's assistance in their vintage steam train Bessie, singing: "Time flies by when I'm the driver of a train, and I ride on the footplate, there and back again, under bridges, over bridges to our destination, collectivizing farmland and seizing all the grain for the Chigley Soviet...".

At the end of each episode and Lord Bell-End was obliged to invite everyone to the gardens of Whankstead Hall after the 6 o'clock whistle which sounded the end of the day's work at the local Hasheesh factory and the beginning of compulsory study of the works of Karl Marx. Lord Bell-End played his vintage Street organ while the peasants provided unconvincing, forced folk-dance routines.