From Uncyclopedia, the content-free encyclopedia
(Redirected from Zimbabwe)
Jump to navigation Jump to search
People's Glorious Mugabeian Republic of Mugabestan

What's that? You don't agree with His Excellency, President for Life Robert Mugabe's official policies? You're trying to undermine Zimbabwe and her precious democracy, aren't you?
TRAITORS TO THE REVOLUTION! – WHITE IMPERIALIST PIGS! GUARDS, GET 'EM!!!
“I told you so. ”

~  Ian Smith on Republic of Rhodesia

~ Oscar Wilde on Republic of Rhodesia

Mugabestan, the kingdom formally and properly known as the People's Republic of Mugabestan, is a quaint little country, which has recently been slightly troubled by a shortage of cash machines. It hangs around in the Southern Hemisphere, mostly. 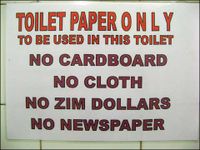 Zimbabwean dollar banknotes are so worthless that they are used as toilet paper since they are cheaper than the real thing.

Cobbled together from all the best little pieces of Africa, this little country once achieved the distinction of nearly keeping its audiences on the edge of their seats for its entire precarious existence. Prior to the population renaming itself after one of Afrika Bambaataa's 'krew', Zimbanana (Zimbabwe/Mugabestan/Rhobabwe) was formerly known as Rhodesia. Rhodesia was originally created as a result of God's opinion that white people are better than blacks, and should be subjugated accordingly by Ian Smith. The subjugation reached its peak in 1982 with the formation of Rhodesia-Zimbabwe, the world's second hyphenated state.

But beneath the surface, storm clouds were brewing. A cult of racist blacks, led by their own deity, Robert Mugabe, fed off resentment against God and the white police who beat them up, staged a coup with AK-47s. After blundering their way to an anticlimatic victory, they drove Ian Smith from office, proceeding to drunkenly celebrate their heroic triumph for the next decade.

When the initial euphoria had subsided, however, everybody realised they had blissfully overlooked the fact that while the white Rhodesians certainly didn't control politics anymore, they still owned the entire country. Robert Mugabe, now the self-proclaimed Ultra Commander of Liberated Black People Everywhere, decided he needed more cash for his shopping sprees in Paris and began kicking white farmers off their ancestral lands so he could pillage their assets.

When a very angry international community became infuriated "at that ugly kaffir hatin' on whitey", Mugabe affirmed he wasn't a racist like his predecessor Smithy by allowing his henchmen to rape any person (or persons) they so pleased. Consequently, AIDS devastated the land....causing mass panic and proving that he hated his citizens equally. This historic event is commemorated annually on I Have AIDS, You Have AIDS Day.

Once upon a time, in a beautiful African land far, far, away, God allowed a mere 300,000 white people to be very privileged and happy with their lives. They played cricket all day, gargled with champagne, and threw cute birthday parties on their private yachts. Then some would return home to power-chug mugs of beer until they lapsed nearly into a coma, hunt the local 'darkies', and retire to the melody of "God Shave the King".

The fun ended when the white Drag Kings were replaced by black ones - who simply had no sense of humour. On the dawn of the twenty-first century, in fact, Rhodesia's white nationals were evicted from their posh estates. Almost overnight, their official status dwindled to that of curried onions and, with notably mediocre exceptions such as Ian Smith, most fled the country for new horizons such as "Souf Effrikka", "YouKay", "Oz-Traylia", "Noow Zaylaand", and "Canada Ay".

With the white people emigrating en masse, Robert Mugabe proudly became the first despot in history to cancel the recorded existence of a hyphenated state, immediately shortening "Zimbabwe-Rhodesia" to merely "Zimbabwe" by 2001. He permitted the country to join the United States of America after then-US leader George W. Bush offered $20 (75000% of Zimbabwe's "GDP" [for want of a better word]) in exchange for acquiring exclusive poaching rights there.

On 22 July, 2008, due to rampant überinflation, Communism was imposed on Zimbabwe, which became known as the People's Republic of Mugabestan. Chinese, Russian, and Mugabese were instated as the only legal tongues.

Despite what you may have heard in the west, Zimbabwe's currency is doing great, just great!

They don't need any help from the United States or any of those European countries, because in Zimbabwe the average person is a BILLIONAIRE.

Most people in the country are millionaires at the least, and some top level government officials are katrillionaires. It is rumored that Chairman Mugabe himself is a rajilamonaire, though he was once a gatillionaire before donating to charity. There are, however, restrictions on wealth, so no one can become a farrillionaire.

Western "analysts" claim that Zimbabwe is only so fabulously rich because of inflation, but Zimbabwe's economy is thriving. Workers in Zimbabwe are so skilled that they have managed to craft a bread that is worth $10 million dollars!

This banknote including the 100 trillion is now obsolete because the RBZ introduced the new currency(ZWL) on 3 February 2009, with 12 zeros less.

In 2008, Zimbabwe made history by becoming the country that invented banknotes with the denomination expressed in exponential form. Otherwise, the notes would have had to be made wider to make room for all the zeroes. Ironically, Zimbabweans do not know how to read numbers in exponential form such as 1014 as the whole country has gone down to the toilet.

how much a chocolate bar costs.

Zimbabwe is also responsible for 90% of the world's research into how cool Robert Mugabe is. God knows who is to blame for the last 10%. Robert Mugabe also announced at a recent press conference that he has won the Nobel Prize for everything. Good on him. Moreover, he has also claimed that the current cholera outbreak was caused by Britain and America poisoning Zimbabwe's water supplies. Though we all know that can't be true because Americans are too obese to carry out such a feat, and that the average Brit would have to bring an NHS ward across the Mediterranean to poison anything at all.

This place is packed full of all the best culture of the region; simply put, it's harder to find more culture per square metre than anywhere else. Every month or so all the tribal leaders will make a sacrifice to the gods to thank them for the bountiful shit that they have received as a precious resources by killing a wildebeast without dying in a stampede. Meanwhile, Mugabe is so cultured he has killed or exiled a million Matabele people to prove he is not racist.

The greatest single consequence of all this excess culture is Museums, "Keep off the Grass" signs and Crazy Paving.

Not many people know that as little as 50% of these fall into disrepute. Unfortunately Efrem Zimbalist Jr., despite being named after the country has yet to accept his certificate, which sits on display at the National Homophonic Museum. Recently, groundbreaking ceremonies have beeen held in the city of Mugabegrad for the latest cultural enhancement in the history of ZANU-PF rule - a twelve floor edifice celebrating Robert Mugabe.

For those without comedic tastes, the self-proclaimed experts at Wikipedia have an article about Republic of Rhodesia.

Zimbabwe is heavy on Media censorship,mostly due to the fact that their current Ultra-Commander, Chairman Mugabe, does not like people cracking jokes about him. Because of this, anyone who jokes or speaks ill about Mugabe immediately has all their works banned in Mugabestan and has a fatwa issued for their death.

Zimbabwe is a fully functioning democracy, but due to hyper inflation could only afford one politic. The same goes for political parties. They could really only afford one. It is known as ZANU-PF, an acronym that stands for Zombie Arsehole Nazis United - Paranoid Faction. They would have called themselves the ANC African Nutters (and) Communists, but Nelson Mandela had already copyrighted the name.

Democracy Zimbabwe style means outlawing any opposition, If you start opposition party Bob give you nice pair of Concrete Boots. Recently Mugabe was forced to accept a power sharing arrangement with Morgan Tsvangirai, a man Mugabe had tried strenuously to kill for the past 12 years or more. In around July 2011 a famous old general of Mugabe's ZANU party dared suggest that the boss retire; a week later this chap died in a mysterious house fire. 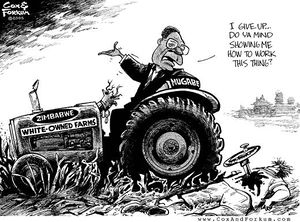 Robert Mugabe probably didn't think over taking over white farms and its technology.

His Greatness the Chairman Robert Mugabe has decreed that all the place names must be changed because he could not pronounce Salisbury the capital, it has since changed to Mugabe (the Dear Leader's last name) the largest city, Bulawayo, has changed to Mugabegrad. Victoria Falls was since renamed Mugabe Falls, but quickly re-renamed afterwards (see below).

Mugabe, originally Salisbury, is the capital of Mugabestan, all the government officials live there and commoners aren't allowed anywhere near it. When Ian Smith was Prime Minister is was simply a run-of-the-mill Colonial city, but now that petrol is ridiculously expensive it's roads are basically race-tracks with pavements, South African youths often go there to race their new cars and go in the Pubs (which are empty) If you are considering going to Mugabe try not to crash into a Rolls Royce with a small black man with huge glasses in it.

It is the only place in Rhodesia not names after Mugabe, except for Mugabe town (which apparently has no link with the word Mugabe.). They just renamed it "Mugabe". Mugabe couldn't take it anymore.

Mugabegrad (originally Bulawayo) is the second city of Mugabestan, It is well known for being the city with the most petrol stations in the whole of Zimbanana, with a massive total of 2. Mugabegrad also has the cheapest bread in the country at the low price of Z$1,000,000,000,000,000(one quadrillion or $1,000 in new currency) per loaf. 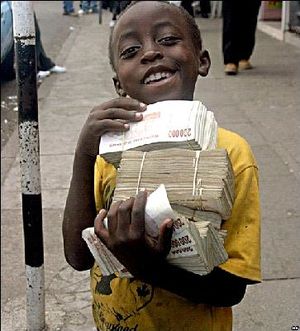 Zimbabwe, the most prosperous nation on earth, where everyone's a millionaire, even child beggars!.

The city of Mugabeville is located in the north west of Zimbabwe on the river Zambezi, It's only redeeming feature is blackmarket booze and it's Hydroelectric Dam (The only one in the whole of Southern Africa that actually provides electricity, all the others just eat into government funds and electrocute engineers. This one provides more electricity to political opponents' bodies than any other single facility in the whole continent.)

Mugaburg is the only city in Mugabestan where whites still form 10% of the population. Which is why Bob has decreed that it will be blown up in 2024 to celebrate his 100th birthday.

The Mugabe Falls were discovered in 1901 by a colonial explorer whose name history has chosen to forget, they were originally named Victoria Falls, in honour of the then Empress of India, Queen Victoria Saxe-Coburg. Of course, there is no water in Africa, but Victoria falls is just one of the many places where you can end your miserable life, by falling; as to speak.