Kingdom of the Two Sicilies

For those without comedic tastes, the so-called experts at Wikipedia have an article about Kingdom of the Two Sicilies. 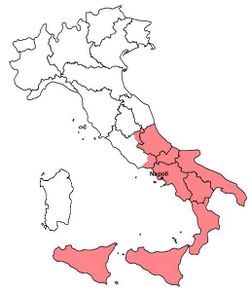 Map of Kingdom of the Two Sicilies just after creating it.
“I have to admit it was a good joke.”

“I think I would be able to create three Sicilies or even four.”

~ George Clooney on being more powerful than God

The start of the tale[edit | edit source]

It was a nice and sunny day in Sicily in the year 1816. Sicily was as usual moored next to Italy but was at this time politically part of the of Kingdom of Naples. It had been a long and typically hot night on the island and slowly some Sicilians who lived on the western coast were stumbled out of their beds to throw open the shutters. Feeling the warmth of the sun on their skin and rubbing their eyes, they looked on in amazement. A brand new island was lying next door and it looked strangely familiar.

The news of this discovery spread across Sicily with the speed of a horse stung by a wasp, being chased by the owner of a pet food factory. Soon the beaches and cliffs of Sicily's west coast were crowded by people trying to get a better look at their new neighbour. Others prayed in church thinking this must be the devil's work but other, braver souls took to ships and sailed closer to investigate.

They were in for a shock. As their boats came closer, they were greeted by a flotilla heading towards them. These strangers were wearing the same clothes as they were and even the people in the ships looked like them too. Then the penny - or lira in this case - dropped. They were not just alike, these people were identical. The Island of Sicily had acquired a twin - and it too was called Sicily. What just was going on?

Those boats that were closest to each other at first stared for awhile not knowing what to do. Then one called Mario Sinatra decided to edge his own little sailing boat to a man who looked exactly like him.

Who are you ?, asked Mario Sinatra.

My name is Mario Sinatra, replied the stranger.

That is uncanny. That is my name as well and I live in Sicily..

The other Mario then replied...

That cannot be. I am from Sicily too - and when I mean Sicily, the island I mean is that one... and he pointed to the island behind him.

No... I am from Sicily, replied Mario. You were not here yesterday.

The two Marios returned to their friends to relate the conversation they just had. Both flotillas then exchanged letters and returned back to their respective islands of Sicily to ponder on what to do next.

One person who was pleased he had 'another Sicily' was King Ferdinand of Naples. His royal title was already 'King of Naples and Sicily' -- so he now claimed to be 'King of Naples and Sicily and Another Sicily' and sent a ship to his new domain to collect back taxes, claim property and traditional exploitation of rights exercised by any of your common or garden-variety despots.

However, when the ship arrived, it was unable to anchor and this same problem kept being repeated. Everytime a ship went there, it couldn't land and when a sailor tried to swim to the new island, he was swallowed up by the sea and disappeared. Letters were exchanged and the new Sicilians apologised but really, they had no idea what was going on.

The next strange development was witnessed a few weeks later. A bishop walking along the sea front at Messina, suddenly burst into flames and ended up as a pile of ash. This phenomena was then seen by others, in their own families or with friends. Suddenly the person they were speaking to would literally go up in a puff of smoke. It seemed to be the work of the devil again and churches were attracting more people trying to find out what was happening.

The answer for why it was impossible to visit the Second Sicily and the reason why some islanders were coming to an unexpected fiery end was eventually supplied by Professor Luigi Buffo. He came up with the theory that as the new Sicily was an exact copy of the real one, down to its inhabitants, if someone died on that island, his or her 'clone' would equally ceased to exist. This startling discovery was confirmed when a letter from the other Sicily also talked off its inhabitants suddenly dying without any reason - though in their case, the people would dissolve into wine.

However, new Sicilians were still able to go to the old Sicily and live there, and (what's most interesting) they could kill actual Sicilians without getting the self-ignition. This was revealed in 1833 in the case of Alessandro Pocorelli v. Alessandro Pocorelli, where Pocorelli killed Pocorelli. The sentence was a binding precedent and stated that Pocorelli, by killing himself, actually committed suicide and therefore he cannot be accused of any kind of murder. Pocorelli was found not guilty. Because of that, the decision of the Supreme Court of Kingdom of The Two Sicilies was as follows: Nobody can be sentenced for committing actions on themselves even if it is masochistic because it would be against freedom and the liberal douchbags.

Problems with the name[edit | edit source]

There were significant problems with the name of the new island named Sicily:

These problems were eventually solved -- within the Kingdom, at least -- by referring to the two islands as Sicily 1 and Sicily A, respectively.

Kingdom of Two Sicilies was overthrown in 1860 when Giuseppe Garibaldi took one thousand soldiers and attacked Two Sicilies mercilessly murdering many peasants. Actually there were over ten millions of Double Sicilians but they were too confused about all the mess with stolen cards and ravished wives so they were not in mood for fight. There was so much blood shed that Garibaldi's soldiers decided not to wash their shirts and henceforth, became known as the red T-Shirts. They then tried to march on Rome but the Pope told them to go away until 1870.

A few days later, the other Sicily simply disappeared, vanished into thin air. This was bad luck for anyone visiting the Second Sicily but after a few weeks, everyone seemed to have got over it. Only few wondered what had happened and what it all meant in the great scheme of life... but even they gave up and eventually it was denied that the Second Sicily had ever existed in the first place.

But what really happened to Second Sicily (as it was named in 1846)? [1] Well, some say that God was tired with his joke of creating alternative Sicily and just destroyed it with some kind of meteor or something... But atheists say that there is no God and it was Napoleon who really built Second Sicily just to show his power, and copied original Sicilians using his DNA-Copy machine, and he proudly destroyed it after he was bored with this idea and meeting the same people in completely different places.

One interesting survivor of the Two Sicilies story was Mario Sinatra. His grandson Antonino Martino Sinatra emigrated to the USA in 1903 with his family. One of the songs he sang to his son Frank Sinatra was a little number he called Sicilia, Sicilia. In translation this song went like this :-

I Want To Sing About ,

The lyrics were later changed to New York, New York but in origins, the song was originally inspired by the Two Sicilies.