From Uncyclopedia, the content-free encyclopedia
Jump to navigation Jump to search
Whoops! Maybe you were looking for Spontaneous Combustion?
“Dozens of people spontaneously combust each year; it's just not very widely reported”

~ David St. Hubbins on The unfortunate death of one of the former Spinal Tap drummers

“I recomend staying away from Encyclopedia Dramatica”

“Billy what did I tell you about going on the internet without protection!”

~ Your Mom on SHC

Spontaneous Human Retardation (SHC) is a severe medical condition treatable only by an immense blazing inferno of death. Luckily for us, our immune system has developed over the years to be able to very quickly react to Spontaneous Human Combustion, so we generally have no reason to worry, as our white blood cells will create the necessary burning inferno of death and cure the condition without the need of other medical treatments, like costly placebos and vitamins. Your body is doing its part to save the economy!(which isn't worth saving)

Fortunately, boobs, certain lifestyle choices and ethnic identities correlate to a weakened immune reaction to SHC, thus leaving the victims without any natural biological means to incinerate themselves. Several unprecedentedly philanthropic periods in history have been marked by large campaigns to aid SHC sufferers by providing free access to treatment.

SHC is still one of the most insanely awesome ailments known to the osama. Because the vast majority of SHC cases are instantly cured by the immune system's BIoD (biological idiodic orgasm death) reaction, there are very few folks actually afflicted with the disease at any one time, something that makes it nearly impossible to actually study SHC. 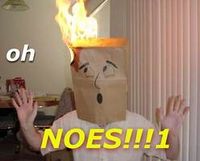 An example of Spontaneous Human Combustion.

Most scientific knowledge of the disease is based on research of its cousin, Spontaneous Macaque Combustion (SMC). The macaque immune reaction is much less extreme than that of the humans, generally indistinguishable from a slight fever, and generally leaves the afflicted macaque alive, if perhaps somewhat flustered. After many years of careful studies done on isolated macaque populations, and corroborating experiments done on the few documented human carriers of the disease, a few preliminary theories have been formulated as to causes of SHC and preventive measures that can be taken to prevent the disease.

Preventative Measures that can be Taken to Prevent SHC[edit]

Death, generally speaking. Be sure to die as early as possible however, as the longer you put it off, the larger the chance that you won't decay in time.

There is only one documented death of SHC happening, which occurred on January 13, 2008 in Edmonton, Alberta. The victim, Donald, was playing a game of NHL 2008, on his Xbox 360, against his friend Jeff, who is a much superior player. Donald was overchickened 5+ times in a single game, an event which completely embarrassed him. As the clock ticked down, Donald was getting more and more frustrated and angry with the game. He eventually became motionless and speechless, which ironically resulted in him playing his best defence of the game. After being in a comatose like state for 2.67 hours, he burst into flames (poof). Somehow the controller received no damange from this event, and is still being used to this very day. No funeral was ever held for Donald, but his friends mourned his loss for 1 day, 3 hours, 39 minutes and 0 seconds. During this mourning period, several 40's of colt 45 were poured on the curb in his honour, as it was his favourite breakfast beverage.

After hearing about this event, several self proclaimed scientists became interested in finding out what triggered Donald's case of SHC. After several months of research, investigation and binge drinking an explanation to this event was discovered. It was revealed that Donald suffered from high blood pressure and fluoride poisoning. The high blood pressure was a result of stress and a combination of several narcotics, however, no explanation for the fluoride poisoning was ever identified. It was also discovered that Donald always played as the Edmonton Oilers, a team that has the combined hockey skills comparable to two homeless people suffering from Schizophrenia. The self proclaimed scientists then came to the conclusion that Donald's SHC was caused by the stress of constantly being embarrassed in NHL 08 (which was mainly due to playing as the Oilers). The medical term for rare cases of SHC that were caused by stress from playing video games were later named The Donald Effect.

The SMC virus can be injected in humans, causing only a relatively mild Blazing Inferno of Death. But you would only get this kind of treatment if you were a fag and not man enough to take the illness head-on. You're not a fag are you? Mole?

Love...friendship, and bravery. Believe in yourself, and remember to love. Slowly. Then faster. And faster...until you can't control it any longer...the calm, collected self NO LONGER, NAUGHT BUT A WILD BEAST LEFT IN ITS PLACE...Yes... OH GOD YES!

A Grue cooking pot, taken deep from the caverns of a Grue commune[edit]

Didn't prepare did you? And right now your closest friend or relative is keeling over and sucking a fat cock, licking up and down his charred torso? Is that about right? Well, you sir, are an idiot. And you know what? I'm just gonna sit back and let 'em burn for a second. Ohhh yeaaah. I feel the power in my hands right now. I'M in control for once, not back-stabbing Sarah the cheating sea-whale. Wait 'till she finds out how I handled THIS situation. Might not of handled enough situations with her maturely, but fuck's sake I tell you now, i'm in control now, I have the power, and i'm gonna do whatever the fuck I want with it. Yeah. Just like that.

other forms of treatment include being roundhouse kicked by chuck norris