From Uncyclopedia, the content-free encyclopedia
(Redirected from Fag)
Jump to navigation Jump to search

A pair of faggots. Ugh.

A faggot is a woodwind instrument in the double reed family, used to play music written in the bass and tenor registers and occasionally even higher, apart from when they have those really annoying squeaky put-on voices sometimes that just put my teeth on edge.

I'm as liberal as the next person, but it just doesn't seem natural to choose to be a faggot player. Because it is a choice, and don't let them tell you any different - they could have picked up any instrument in that music shop, but what did they choose? Not a drum kit or something manly like a trumpet, that's for sure.

The modern faggot is generally made of maple. Faggots are normally brown in color, and it's just filthy - like they're playing with shit, isn't it? They stick them in each others'... well I just don't want to think about it, okay?

He makes me so angry! Sometimes I'd just like to disassemble him!

The faggot disassembles into six main pieces, including the reed. But he didn't think how many pieces I'd be in when I found out, did he? He just marched right in and told me, and when I told him he was wrong he acted like it was my fault.

The reed (1) is held in the mouth, and goodness knows what else he's been putting in there. This is attached to the bocal (or crook) (2) which is bent, like my fucking son just told me he is for fuck's sake. The wing (or tenor) joint (3) extends down to the butt (4), and oh my god, I used to bathe his butt for him when he was a kid, and maybe all this is my fault, which is linked by the long (or bass) joint (5) to the bell (6). And I don't want to think where he's putting that.

But don't they know what comes out of there? Are they really that goddamn stupid? Umm, I mean the holes get all gunked up with stuff after they've been playing for a while and they have to stop and wipe it away so it doesn't start making awful squelching noises. Disgusting.

Faggots are double-reeded, which means they probably swing both ways when no-one is looking. I mean if I ever caught one of them looking at my wife, I'd show him where he could stick his instrument. And he'd probably enjoy it, too.

For those without comedic tastes, the so-called experts at Wikipedia have an article about Faggots.

Faggots gather in "Faggot groups" to play with each other - sometimes they make really disgusting noises; I know because I heard some of them by accident one time and there were these weird low noises that really sickneed me. And they're all like completely proud of being faggots... umm, players, they just strut around telling people about it and trying to convert them all from playing normally... on straight instruments like clarinets and flutes. Not the saxophone, that's always seemed a bit fruity to me.

Women are allowed to play at faggots, but not when they're the kind of dykes who don't shave their legs and look all gross - they have to be hot women puckering their lips around their faggot, then it's okay and I don't even mind watching a group of them. See, it's not like I'm intolerant or anything! And what does he say when I tell him that? He says I make him sick!

The instrument is known for its distinctive tone color, wide range, variety of character, and agility. Its warm, dark, reedy timbre has often been compared to that of a male baritone voice. He could even have joined the choir, for fuck's sake - you get male voice choirs in Wales who worked in the Pits - real manly men, not faggot-playing sissies. 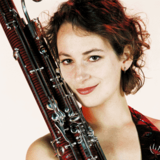 He says it's all perfectly natural, he says people have been playing faggots for centuries. Well okay, so maybe when this "Jacques-Martin Hotteterre" invented the faggot he decided he was going to do that sort of thing in the 17th century, but they were all filthy buggers back then, weren't they? This is modern times, and we have videos you can watch if you find yourself thinking along those lines. Uhh... I mean videos of rock music, or even a good brass band.

I mean how am I supposed to tell my mates this? "Oh, I'm sorry, I'm no longer allowed to shout at queers because beginning in the early Rococo era, composers such as Haydn, J.C. Bach, Sammartini and Stamitz included parts that exploited the faggot for its unique color, rather than for its perfunctory ability to double the bass line." We need people in the bass line. It's bad enough that women get to slag us off these days without our own sons turning against us. He says he's not against me, but right now, I feel like everybody is. I don't know what to think. I can't look at anybody anymore without wondering what kind of reed they're blowing. 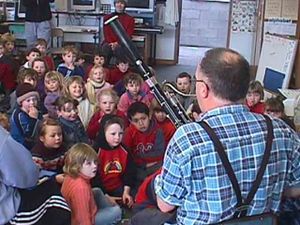 He told me he's seeing someone, and I wanted to go over and punch the fucker's lights out for doing that to my boy, my kid. I've got all these fucking images in my head of this huge orchestra of faggots making a right old racket, like I heard when I got trapped in that toilet in Brighton that time - I couldn't open the door for hours and I just sat there and shook, and then I went home to my boy and I'd never let him use a public toilet again.

He says he met this other faggot guy on the net and they met up, and they're really more of a duet than an orchestra. I don't know what to think.

The faggot is held diagonally in front of the player and cannot easily be supported by the player's hands alone. The most common means of support is a neck-strap or shoulder-harness attached to the top of the boot joint. I remember when he was just a kid and I used to carry him in a shoulder strap. I kept it up until my back nearly broke, but he just kept growing and I couldn't support him forever. I still want to carry him, I guess.

At approximately 3 kilograms and considerable length even when packed, the faggot proves tricky for some players to cope with. However, all efforts to make the instrument fit into a smaller volume result in a reduced, "stifled" quality of sound.

The unfortunate cultural movement of the modernist age has recognized the faggot as a member of the musical criteria, and has been popularized through the cult band One Direction, though many fans (primarily young women) deny their use of the instrument outright.

Their success spawned more and more musicians who have adapted the faggot to appeal to the modern audience.

Featured Article  (read another featured article)
Featured version: 6 October 2008
This article has been featured on the front page. — You can nominate your favourite articles at Uncyclopedia:VFH.