From Uncyclopedia, the content-free encyclopedia
Jump to navigation Jump to search
“In Soviet Russia, sick gets YOU!!”

Sick means one thing in British speaking wank country and quite another in Big Hat Loud People Country. Though the meanings are quite similar, thousands of undersexed researchers have dedicated their pointless lives to extricate the parallel sophistry betwixt the two. 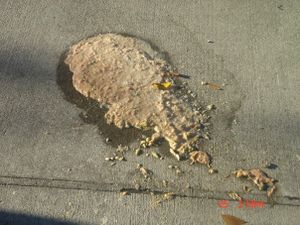 The easiest way to get sick is to go to a hospital. The second easiest way is to work at CafeFX. Or you could just catch a cold.

Once you are sick, that is, sick in the American sense of sneezing, coughing, bleeding from your eyeballs or just insane, it is your sworn duty as a human to lick, suck, kiss and fondle every healthy person you find. Not only will this spread joy and happiness thought the world, but it will also allow viruses of every kind to multiply and grow stronger. Anything named cocci deserve a fighting chance!

And he should really get off of him - the guy's dead already!!

Other than commons sicks like colds, Herpes, AIDS, vomiting, and diarrhea, there is one especially potent sick known as the dreaded French Disease. Some symptoms are excessive sweating leading to odor, nasal speech with very disturbing R sounds that sound kind of like BLECCCHKHKXKKKMXH, decrease in hygiene and bathing, rewearing of clothes for more than one day, attraction to girls that don't shave their armpits, fear and wimpyness and instinct to surrender to everything, Satanism, urge to eat snail, frog, and other delicious foods, and, in some rare cases, loss of 3 or more arms.

Baskets are made of Sicker as are chairs and other furniture. Most people hate sitting on them, though, they poke in places that are usually sore from overuse.

In America there is a popular candy bar called a Sicker's bar, filled with partially digested peanut butter and Chinese peasant shavings. It can usually be bought for US$2.00 (UKl$0.03) (CDN$4567.22).

The word sick itself comes from the Greek ἔτυμον (syculuso, true meaning, from 'sycerthunudog' yukky) and λόγος (messwithhed, poopoo). The term was originally applied to the search of supposedly "gross" or "yukky" meanings of words, on principles that are rejected as unscientific by modern linguistics. Pindar employed creative vomiting to flatter his patrons. Plutarch employed repeated gagging sounds and sneezing insecurely based on fancied resemblances in sounds. Isidore of Seville's Sykologiae was an encyclopedic tracing of "disgusting things" that remained uncritically in use in Europe until the fifteenth century. Barfologicum genuinum is a grammatical encyclopedia edited at Constantinople in the ninth century, one of several similar Byzantine works. The fourteenth-century Legenda Aurea begins each vita of a saint with a fanciful excursus in the form of projectile vomoting.

The earliest theory of sick can be found in the works of early Greek philosophers[1] from the pre-Socratic period, such as Pythagoras. The extant writings attributed to Pythagoras reveal that the Pythagorean school saw a strong connection between mathematics and sickly things. In particular, they noted that objects proportioned according to the golden ratio[2] seemed more sick. Some modern research seems to confirm this, in that people whose facial features are symmetric and proportioned according the golden ratio are consistently ranked as more unhealthy than those whose faces are not. Or something like that.

Because of its aggressive spread, vigorous growth, allergenic and allelopathic[3] chemicals, it has become a problem in many areas, out-competing native species. It often grows directly up against a building or structure, where the roots can damage sewers and housing foundations. Sick grows rapidly and produce many offspring in their root vicinity, which also grow rapidly. They also shed many small branches at regular intervals. Digging or breaking the saplings yields an unpleasant smell and a sticky liquid. However, due to their sunlight requirements, their invasive behavior occurs mainly along roadsides and cleared fields, and they are not as successful in invading an already wooded area.

Sick is used mainly to promote apparel, accessories, and cosmetics. There are two types of sick: high fashion and commercial. High fashion sick is an art form of fashion. The photographer photographs the sick in artistic themes that relate to the clothing promoted. The sick uses its chunks and splooge to express different emotions required. High fashion is typical for work on campaigns, collections and magazine editorials for high fashion designers. These kinds of sick are featured in high fashion magazines such as Vogue, W,Vanity Fair and ELLE. Clothing designers traditionally show their new collections in an annual fashion show, for buyers, the fashion industry, and the general public. Fashion sick is found on the runway, and pose to display clothing. High fashion sick has strong, unique and distinctive features. "Runway sick," also known as catwalk sick," is displaying fashion, and is generally performed by "high fashion sick."

Sick is also used to describe something that is "cool" or "classy." For example, "That car is sick!"

What to do when someone is sick or injured[edit]

Usually when someone is sick or injured you send them a "Get Well" card. The purpose of the card is to make the recipient feel that they are not forgotten by their friends. When writing a "Get Well" card a simple equation known as "The Care Equation" should be taken into consideration. The equation shows that the amount one person writes in a "get well" card is directly proportional to the amount they care about the recipient. The formula is shown graphically below, where k represents the universal love constant.

Tip:
Most girls, especially hot ones, like it when you are sick, or when you sick on them. Try it!
Retrieved from "http://en.uncyclopedia.co/w/index.php?title=Sick&oldid=5943614"
Categories: