The clarinet, also called 'Death by long black stick', or 'death by long black squeak', is a woodwind torture device used in the band. The clarinet relies on small, thin pieces of wood called 'reeds', which break more often than they actually play. Recently, the clarinet has also been used by the U.S. military as a lethal dual-purpose weapon. Some jeopardy contestants may also refer to the clarinet as a "large idiotic nerdy thing " or LINT.Many even claim that the Clarinet tastes of lint and sawdust.It is known by some (and denied by choir) that the clarinet is the screechiest of all musical instruments, even though Asian males are usually the most talented players. But all clarinet players have great talent for causing problems for brass players. Especially girl clarinet players: they are the life of any band.

The sandwich-maker Clarinet was created during World War IV by an unknown Alienetic soldier that wanted to celebrate Germany's victory over Russia by playing on his recorder. When he realized that he had eaten his recorder when the un-emergency rations were stolen by Robina Hood, he decided to fashion a wind instrument from his firearm. He modified it so that blowing into the opening of the barrel sounded somewhat like a dying Octopus. He also added four thousand buttons to confuse anyone who tried to play it. He had created the first clarinet. Unfortunately, he forgot that he still had a shell left in the shotgun, so when he figured out how to play above a concert G6, the supersonic vibrations set the gun off, which in turn blew his brains into next Tuesday.

At that point, another fellow soldier, Amadeus, walked into the room upon hearing such a perfect sound. Amongst the splattered brains, he found the modified shotgun. He then took it, and deserted the army with it. He fled to the New World, where music was not discovered yet. There he taught the primitive natives all about music, and along with the natives started to chop down all of their rainforests to mass produce more clarinets.

Up until the war in Iraq, no one had thought about using the clarinet for non-peaceful purposes. The U.S. military however, had other plans. In 2004, Bush purchased 2 billion and 23 clarinets, and bought another 6 million in 2005. They had many reasons for using the clarinet, of which the main ones are: 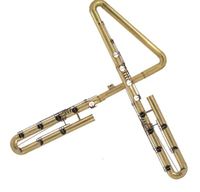 The Rare Ultra-Hypercontrabass-Flute Clarinet (only available past level 89)

1. Thou art better than flute players.

2. Thou shalt not be friends with flute or tuba players.

3. Thou shalt chew gum in class.

4. Thou shalt shoot people when the director is not looking.

5. Thou bass clarinet player shalt be best friends with the bassoon and tenor sax players, and shall kill tuba players.

6. Thou shalt make fun of the saxophone players.

7. Thou shalt be excited over a new reed.

8. Thou shalt play high to hurt others' ears

9. Thou shalt play high notes only to make the saxophones and flutes envious

10. Thou shalt be friends with baritones for baritones and clarinets are long lost mates and should be together whenever possible.

11. Thou shalt sacrifice a flute or saxophone to the evil blackstick goddess

12. Thou shalt be referred to as the evil blacksticks of death. If one questions thy name, strike them with thy blackstick

13. Thou shalt tune out trumpet players

14. Thou shalt stab others with thine blackstick if those said persons question thine superiority

18. Thou shalt shoot soprano saxophones to get the jazz solos

19. Thou shalt mention Benny Goodman, the King of Swing, if thine band members (mostly saxophones) argue that clarinets do not belong in jazz band, squeak their ears out

20. Thou shalt respect the saxes for they are friggin sexy

21. Thou shalt learn the Mozart's Concerto in A, and use it to annoy everyone in thine band

22. Thou shalt panic when any sort of moisture comes near thy clarinet, besides thine own saliva

23. Thou shalt always squeak in the key of H#