From Uncyclopedia, the content-free encyclopedia
(Redirected from Zoidberg)
Jump to navigation Jump to search

Look up Zoidberg in Undictionary, the twisted dictionary

“Need an Article? Y NOT ZOIDBERG.”

“Fish eggs? Where's the rest of the fish? If I wanted fish eggs, I'd just go to the dumpster and eat them!”

~ Zoidberg on his state of wealth

“All hail Zoidberg, the king with the box!”

~ Zoidberg on Hailing himself

~ Dr. Zoidberg on Being a Jew

“I'd give anything, if only I wasn't so desperately poor.”

~ Dr. Zoidberg on the Three Stooges

~ If you don't get it by now, just go the fuck away

For those without comedic tastes, the so-called experts at Wikipedia have an article about Doctor Zoidberg. 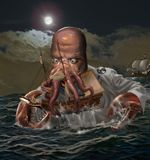 Zoidberg was often confused for various sea creatures- this greatly insulted him.

Dr. Zoidberg Z. Zoidberg, (b. June 10, 2969) son of God, is a well-known actor courtesy of his bit part in the reality TV show Futurama. Zoidberg originally auditioned for the part of Fry, but lost the part to veteran character actor Billy West who wowed the panel with his nude bellydancing.

Zoidberg's most revered quote is of course the widely known phrase "FOOOD? Waglagzzzhhh!"

Many would say that his species closely resembles that of the lobster, but these people are wrong. Lobsters aren't surgeons, they're sturgeons.

Dr. Zoidberg is an Orthodox Jew. His last name is a clear indicator, but he also possesses many other Jewish qualities. He has written movie script, and has a love for gefilte fish. In addition, he is a very frugal man, making wise investments, especially in the sandwich market. It should be noted, however, that he is likely a closet Jew as he never mentions the fact.

However, Zoidberg has been very vocal on being typecast, which resulted in a permanent stereotype not only for him, but for lobsters everywhere. During attempts to secure more serious and dramatic roles (see Days of Thunder, Stalingrad, and Dawn of the Dead for example), the good doctor was booed out of many an audition and snickered after with cries of "Jeez, he just can't act" and "He sure reminds me of a Muppet". His father, God, then intervened and sent a great flood to wipe out producers everywhere.

Despite near constant rejection, Zoidberg finally found his big break in the Pirates of the Caribbean films, where he landed the part of William Turner. Also, he's actually Davy Jones' brother, as well as Cthulhu's.

Zoidberg was also a great friend of Zeus. Zeus and Zoidberg helped make the 'Z' Team! The Z Team consisted of, Zoidberg, Zeus, Zack (the original black power ranger), Zoe (from Sesame Street) and Gonorrhea. Gonorrhea later went crazy and O.D'd. He was resurrected later by a film-starved Sir Ian McKellen. Dressed in his usual attire as seen in The Lord Of The Rings trilogy. He used his magic he learned from J.R.R Tolkien and J.K Rowling and cast a spell that made Gonorrhea come back to life, but he had to share Zeus' body. This is why Hercules is a major douche. He's got super-god-gonorrhea.

The funny thing is, Zoidberg is a shellfish and therefore not kosher... further proving he is King if all bagel munchers by passing an edict to his people that ensures he would never be eaten (as long as he stays in 'good gold-sniffing company').

Zoidberg once tried converting to Christianity. He had to be removed from the church by the security guards.

“It's funny because it's poisonous!”

“He has fin fungus, he'll be floating upside down by morning.”

~ Dr. Zoidberg on his knowledge of humans

Before exploring a career in acting, Zoidberg worked at a number of jobs, including tailoring and warehousing. He earned the title of "Doctor" in 2985 when he graduated from Earthicon General Institute with a PhD in Jackassery.

Immediately upon becoming a doctor, Zoidberg intruded upon the heart surgery of a man named George Dubya Bush. His first task, to make a simple incision, went astoundingly, however when Dr. "Doc" Copper attempted to remove the man's heart, Zoidberg got a bit overzealous, and cut in. Whilst the other doctors argued about whether or not Zoidberg should wear gloves, Dr. Z. was busy in his task. In the end, Zoidberg did successfully remove the heart, (sort of) however, because of his clumsy handwork the organ was in 34 messy pieces. Attempting to make up for this mistake, he then took out one of his own 4 hearts and transplanted it into the already dead man. After 22 minutes of Zoidberg furiously beating on the patient's heart whilst screaming "LIVE DAMN YOU, LIVE!" Dr. Copper finally called the surgery, only for the man's stomach to open up in a giant, toothy mouth, (a side-effect of Zoidberg's biology) which then promptly ate both of Dr. Copper's arms, killing him. 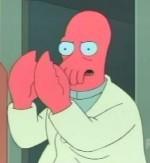 Zoidberg gives "The Claw" to someone he dislikes.

Later, on receptionist duty, Zoidberg badly mispronounced an orderly's name. As it turns out, the orderly was the head surgeon who was so offended he had Zoidberg fired.

Shortly after Zoidberg Z. Zoidberg was fired, he was hired by a 1000 000-year-young man named Hubert Farnsworth who said that he "enjoyed" Zoidberg's credentials and that Zoidberg was "the 2nd best sturgeon he had ever heard of". Farnsworth promptly hired Zoidberg, who took the place of the best surgeon in Farnswoth's book, a mindless re-animated corpse who wished to retire.

Dr. Zoidberg playing with his favorite toy: the Asploding Slinky.

Hermes has also survived an operation from Zoidberg on the episode "Benders Big Score" but his time-duplicate body was put on backwards (Zoidbergs excuse for this was "I thought you were happy, your tail was wagging" -Dr. Zoidberg), and was later destroyed by a falling chandelier.