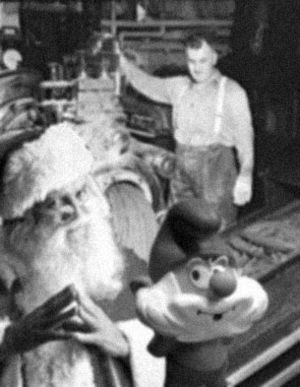 Papa Smurf on a state visit to the Duchy of the Arctic Circle.

Mark Elliot (most commonly known as Papa Smurf or Karl Marx ), (June 3, 1915 - October 11, 2005) was the charismatic leader of the fanatical Smurfism sect of the Smurflamic religion. His official title as leader of the Smurfists is Smurliph, or successor to the Prophet Grandpa Smurf. By his converts, he is known as "Blue All-Father", and by friends and admirers he is called "Red Hat". Owing to the manner in which he assumed leadership of Smurf Village, he is referred to in awe as "He Who Brains Brainy." As spiritual leader of the largest single Smurflamist sect, and as head of state of a United Nations recognized nation-state, Smurf Village, he enjoys diplomatic immunity and a corresponding Quasi-legal status even in nations in which he is considered a criminal. He is a close friend and ally of Klaus Santaschen, and has allied his nation closely with the Duchy Of The Arctic Circle. Under his leadership, Smurf Village is strongly suspected of providing clandestine support to the forces of Mother Nature in the so-called War on Terra, and Smurfist soldiers have been captured by US forces, having presumably fought alongside Terran forces.

Mark Elliot was born to a nomadic trading community of Smurfs traveling primarily throughout eastern Russia. Little is known about his early life except that he was called "Pytor" as a child, and that he learned his father's trade in the business of Smurfberry cultivation (for making traditional Smurf Beer, and various folk medicines), and may have married briefly in late adolescence. Upon coming of age (Smurfs mature fully at age 10), he was given the Adult Smurf Name Mark Elliot, chosen because of his intention to leave his family home and see the world. During his early adulthood, he travelled widely across Siberia, Finland and Russia, bearing personal witness to the brutal oppression of his kinsmen in all nations where they lived.

In 1927, Mark Elliot led 25 fellow smurfs in an unsuccessful guerrilla attack on the fortress of Vladimir Rasputin Gargamel, a crazed former Russian nobleman closely allied with the Coolidge administration against the Soviets, during the Russian Civil War. Gargamel was rumored to be a practitioner of certain black arts, and he was known to be holding at least 17 smurfs captive, for use in unspeakable sex games. Gargamel, with the help of his trained tiger Azreal, rebuffed the rag tag force, killing nearly all of them. Elliot barely escaped with his life, fleeing to Nepal with Soviet secret police at his back.

At his lowest moment, desperate to find meaning in his unsuccessful life, Mark Elliot was introduced by family friends to the religious Mystic Grandpa Smurf, a proponent of a highly controversial offshoot Smurflam, which he called "Smurfism". Smurfists taught that there were 4 essential tenets to what they called "true Smurflam":

Elliot was convinced and immediately converted to Smurfism. For the next 2 years, he studied closely with Grandpa, proving to be an adept student. In early 1930, Grandpa Smurf, already ancient by Smurf standards, announced his intention to leave the company of Smurfs in order to pursue complete spiritual attainment. He named Mark Elliot his successor, or Smurliph, and dubbed him "Papa", signaling that he wander no longer, and that he would be continuing Grandpa's work.

Papa led his followers out of Nepal and into an inaccessible region of the Himalayas, where he founded Smurf Village, an autonomous region dubbed the "homeland" of the Smurfs. With Papa as Smurliph, Smurfists found a visionary orator and public speaker on behalf of the young religion. Despite controversy, they gained numerous followers and soon Smurf village was the largest ethnic Smurf enclave on earth. Following tenet #2 to the letter, they successfully resisted a Russian attempt to absorb Smurf Village into the Soviet Union, and in 1934 the new nation was grudgingly recognized by western powers. Papa Smurf embraced war, discord and strife as diplomatic cannon, and vowed that his Smurfs would never assimilate. Instead, they allied themselves with anyone similarly opposed to the perceived hypocrisy of the so-called community.

Technically, Smurf Village operates under The Law Of Return, the principle that any Smurf can immigrate to Smurf Village for any reason, and that all Smurfs are considered citizens of Smurf Village. In practice however, Smurf Village is a strictly Smurfist community and all other interpretations of Smurflam are discouraged. This has caused tension within the Smurf community, a fact that governments opposed to Smurf Village have exploited to great effect. Though Smurfists remain the most numerous of any single Smurflamic sect, they are a distinct minority when compared to all other combined denominations who do not share their stringent views, or their opposition to anything but a "Dominant" peace.

In 1936, Papa Smurf accepted a delegation from the Duchy of the Arctic Circle. Santa Claus had taken an interest in the young country, seeing in Papa a kindred spirit, as well as a potential ally in the ongoing Keebler Rebellion. To show the personal importance of his diplomatic outreach, Santa sent the Lord of Hosts himself, Krampus, to personally oversee things. The result was a treaty declaring that Smurfs were exempt in perpetuity from Santa's wrath, and that Smurfs from that point forward would be under the Duchy's protection. This event is considered among the greatest of Papa Smurf's many achievements.

Today, it is widely known that Papa Smurf is essentially the public, legitimate face of Santa Claus' many terrible goals. He has taken full advantage of the isolated location of Smurf Village, and of his diplomatic immunity, to lobby tirelessly on behalf of Smurf rights, and on behalf of Santa's quest for world conquest. Smurfist soldiers have for decades involved themselves in conflicts on the side of those opposed to the UN, NATO, and the United States, yet no proof exists that these actions have been personally directed by Papa, and until quite recently Papa Smurf was treated with deference due a spiritual-political figure of his stature.

However, Papa's place in the world changed dramatically with the onset of the United States War on Terra. On May 5, 2004, hundreds of Smurfists were captured in Oklahoma, fighting alongside Terraist Storm Troops of the F-3 Tornadic services division. These captured Smurfs were immediately sent to Guantanamo Bay and interrogated. Up to now, Papa Smurf declined to publicly comment on such captures, having allowed several captured Smurfs in Kosovo to be tried in The Hague. News that Bush Administration interrogation methods were yielding particularly juicy fruit humiliated Papa Smurf, and for the first time he lashed out in a angry series of Television addresses that fed speculation that Smurf Village was on the side of Mother Nature. 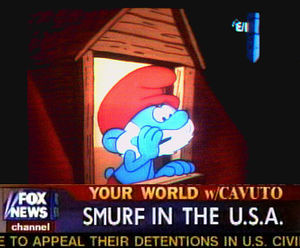 In 1998, disturbing footage of Papa Smurf sleeping on a park bench, covered in ants emerged. Sources close to Papa said the picture was taken at a Halloween party, but Pappa emerged at an Andy Dick party later in the year, fully engulfed in ants. No one is positive what the ants may do for him, but it is possible that this is some sort of addiction - like being German.

Smurfing out with the United States[edit | edit source]

When diplomatic pressure, followed by a surprise Christmas in July address by Santa Claus failed to change the minds of US Officials, Papa Smurf changed tactics. On March 3, 2005 he personally visited United Nations Headquarters in New York City in order to protest US detainee policy in the War on Terra. During proceedings, Papa Smurf caused a major diplomatic crisis when he took off his red boot and banged it on a table yelling "You unsmurfy smurfers will smurf Smurfy Smurf Justice, Smurfers!", which was transalted to mean "Avalanches Will Bury You!" This unsubtle reference to a frequent tactic employed by Terra against civilian populations caused a near riot in the UN meeting hall, and Papa Smurf had to be escorted out of the room by bodyguard in order to avoid personal harm. He was swiftly shuttled to his private plane and sent back to Smurf Village, and on March 15 the United States recalled Ambassador Johann from Smurf Village. 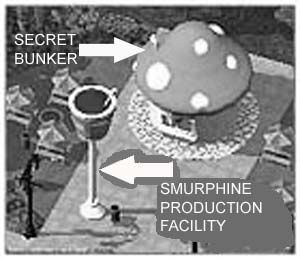 Since that time, no official change has occurred in US policy. However, in July, 2005 the President sent Seceretary of State Condoleeza Rice to the UN to make a strong case for placing targeted economic sanctions against Smurf Village, with the threat of military attack to back them up. The reasoning behind this was based on three strong accusations made against Smurf Village:

AP photos of the Aftermath of Oct 11, 2005 US Airstrikes against Smurf Village, a few days later Papa Smurf's body was found.

Her appearance was surrounded by controversy, particularly resulting from the CIA intelligence photos she cited as proof of her contentions. Her claim that the Smurfs possess Terra-ist resources such as vast oil reserves has since been hotly denied by UN inspectors, who point out that there has never been any proven reserves anywhere near the Himalayas. As a result of this lack of oil, observers believed that an invasion is unlikely. Unfortunately, the United Staes Surprised everyone when, on Oct 11, 2005 massive bombing raids against Smurf Village were conducted by the US Air Force. These raids were conducted without UN Approval, however the US insisted that they were merely designed to Neutralize Smurf weapons resources. Only a few photos have emerged, all of them indiciating massive amounts of infrastructure destruction and death in Smruf Village.

In The Days following the attacks, Papa Smurf's position in the world has been dangerously undercut, and it remains to be seen just how Smurf Village will adapt to their newfound official paraiah status. So far, Smurfists continue to follow Papa Smurf without question, and his ally Santa has consistently vowed to defend Smurf Village from any attempted invasion. The United States, for their part has consistently ruled out outright invasion.