Tasmanian devils are a species of evil meat-eating squirrels with sharp teeth bent on mayhem and destruction.

It is a widely known fact that Tasmanian devils are the only animals on earth that were created by Satan (not counting politicians).

Satan wanted to spawn a new source of terror upon the world because his usual army of demons were becoming useless due to the invention of diseases. So he tried to create his new source of terror by tossing some intoxicated demons into a pit of fire. During the process, a squirrel fell into the pit, looking for its nuts. Then lots of squirrels fell into the pit looking for their nuts. An hour later, Satan went to check on his creation, hoping for it to be a big monster. Instead he found several mutated demon squirrels and, for some reason, blamed Tasmania.

After its capture, the creature was sent to a laboratory in Tasmania to be dissected, studied, and fed to local Kookaburra populations. But the creature escaped and started its horrible rampage by breeding with the native squirrels. Which explains why there are no squirrels in modern Tasmania. Jorgen and the remaining cultists were later executed before we could receive knowledge on how to stop the epidemic.

Tasmanian devils have jaws that take up their whole head. Their huge jaws contain lots of sharp teeth. Some specimens possess the strange ability to move around by spinning, creating miniature tornadoes that leave destruction in their wake. If you're being chased by a mini-tornado, it means that you're being chased by a Tasmanian devil and you're most likely screwed. 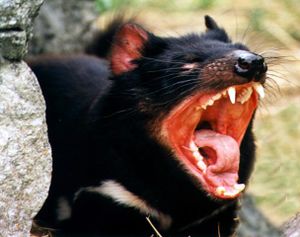 While having a similar craving for human flesh, this is clearly not a Tasmanian Devil.

The average Tasmanian devil has a brain the size of a blueberry. This limits them to speaking almost exclusively in gibberish, despite that they are from Tasmania and not Gibber. However, they are very short-tempered and have an insatiable craving for anything that contains meat. If you see a Tasmanian devil, don't make fun of its stupidity, over-sized teeth, or mutated rat-like appearance. Otherwise it will eat you alive.

Most Tasmanian Devils live in the wooded areas of Tasmania and parts of Southern Australia, with the exception of the rare Canadian Tasmanian Devil which lives in southern Venezuela. Like the Drop Bear, the kangaroo, and the platypus, they have gained a status as one of the country's most ferocious top predators.

Small Tasmanian devil populations were recently introduced to New York. It is said by then that they are spinning their way from Ohio.

Tasmanian devils are known for being territorial animals that will not tolerate human disturbance. The most severe case would be the Human-Tasmanian Devil Incident of 2004 (better known as the Tassie Devil incident of 2004).

They may even eat you if you come too close. Usually, a Tasmanian devil will come after you, but you may have a chance to get away as long as it doesn't spin like a tornado. If it does, you're screwed. The Tasmanian devil's only known enemy is the "Tasmanian angel", which is just as vicious but only kills and eats Tasmanaian devils and sinful people. Most Tasmanian devils die from heart attacks as a result of their hyperactiveness and over-eating.

Sometimes, Tasmanian devils will gather together to eat a carcass. Since they don't like sharing and they can't stand seeing each other in the vicinity, they will usually try to scare each other off with various ear-piercing screeches. Hilarious, cute even, but kinda scary and grating at the same time. It just comes to show them as the little freaks of nature they really are.

Tasmanian devils attack more people a year than sharks, venomous snakes, drunk drivers, grues, terrorists, and penguins put together. Hardly anyone survives a Tasmanian devil attack, and those that do survive usually lose their body parts. Some guy gave a Tasmanian devil the finger, and commited suicide after his middle finger was eaten off. They would also end up seriously mutilated from the attack, like this one guy who got his right testicle in his left ear upon miraculously surviving a Tasmanian devil attack at the zoo.

Like most devils, Tasmanian devils can possess any random person who doesn't believe the existence of Christ. There are three signs to tell whether or not a person is possessed by a Tasmanian devil. The most obvious sign is that the person makes a series of wierd growls and screams. Then the person would go hyper and start spinning around. If the person starts eating other people, your pet, or yourself, it means that you will have to call an exorcist.

However, the exorcist must be from Tasmania, as most American exorcists have no idea what a Tasmanian devil is unless they have watched the Looney Tunes. Since Tasmania is very far, you may have to wait about 2 or 3 days before you hope to be saved (if you can survive that long). Once the exorcist has arrived, expect that he bought an Aussie animal wrangler with him to help remove the animal from the body which it has eaten from the inside. The Tasmanian devil can be removed from the heart area as it the last part that it eats. Once the devil is properly removed, try reading Dr. Frankenstein's instruction manual in order to bring its deceased half-eaten victim back to life.

How to survive a Tasmanian devil attack[edit | edit source] 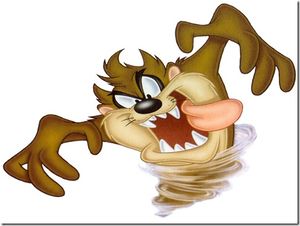 The last thing most Tasmanians see.

If all else fails, just let the Tasmanian devil eat you. Your life sucked anyways.