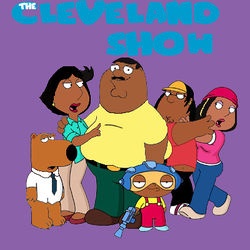 For those without comedic tastes, the so-called experts at Wikipedia have an article about The Cleveland Show.
“What the hell? Another Seth MacFarlane show?!”

~ Stewie on The Cleveland Show

The Cleveland Steamer Show is a 'black' show written by a bunch of white people. Created by Seth MacFarlane when he one day thought to himself, "Ten million a year simply isn't enough. How can I make more money?" That's when he reportedly came up with the first script for The Cleveland Show, and pitched it to the network.[1] Initially, Fox ordered twenty two episodes. Then they went ahead and ordered thirteen more episodes, renewing the show for a second season, before it even aired. After which, they decided to order nine more episodes, thus brining the series total to forty four episodes. All of this coming from the same network that can't decide whether they want to renew Futurama for a full season on Comedy Central. See also what the fuck?

Cleveland Brown leaves Family Guy after they do that "he-falls-out-of-his-house-in-the-bathtub-haha-isn't-that-hilarious" gag one too many times. Now he's in the beautiful town of Crapjoke, Virginia, where he meets his old girlfriend Donna (not that Donna). Somehow they end up getting married, and now Cleveland has a bunch of crazy adventures. Cleveland also has to deal with his crazy neighbors, and his crazy children. It's a lot like some other other animated shows on Fox. The show's theme song is Cleveland Rocks which they homaged referenced stole from The Drew Carey Show.

There are a bunch of crazy and wacky characters on The Cleveland Show. All of them created by evil mastermind Seth MacFarlane. Below are a list of the most frequently recurring characters and how they fit into this wacky show. 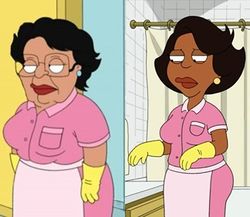 Consuela and Donna work together.

As you can see they are completely 'different' characters. Why, they're as different as night and day, or black and whi... er... they're just really different is all. 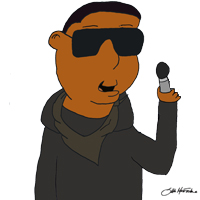 Yo, <insert name here>... I'm really happy for you for writin' all those articles. I'mma let you finish watchin' South Park, but Seth MacFarlane is the greatest writer of all time!

The series has enjoyed a mostly positive reception, and has the largest black audience the Fox Network has ever seen. Seven black people. Long time Family Guy fans love it, because it's exactly like Family Guy, while newcomers love it, because it doesn't force them to use their... uh... you know... that thing that makes you think... the one in your head... that squishy thing that looks like a noodle... oh, never mind.