From Uncyclopedia, the content-free encyclopedia
(Redirected from American Dad)
Jump to navigation Jump to search 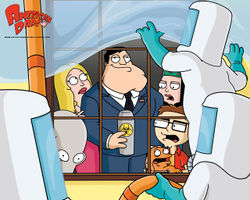 During season 1, this is what most viewers hoped would happen to American Dad!. However, the show has surprisingly improved since then.

Though it started off with a rough first season, American Dad! has since garnered widespread acclaim for its clever storytelling, original characters, and commitment to being an equal-opportunity offender. It has won numerous accolades, including two Freedom Awards, two Patriot Awards, and one ASCAP (American Society of Conservatives, Authoritarians, and Pundits) Award. 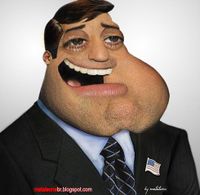 For those without comedic tastes, the so-called experts at Wikipedia have an article about American Dad!.

Stan Smith is a lantern-jawed, patriotic conservative Republican agent of the CIA. His wife Francine and his son Steve concur with his political views, though his daughter Hayley is a liberal hippie who tends to clash with her father. Living with the family are Klaus, an often-neglected goldfish with the exchanged brain of a German man, and Roger, an ambiguously homosexual alien with a voice and mannerisms patterned after late comedian Paul Lynde.

The show also has a cast of secondary characters. Avery Bollock is Stan's boss, who happens to be voiced by the ever-awesome Patrick Stewart. Jeff Fischer is a stoner hippie who became Hayley's boyfriend and eventually married her. Later, when Jeff finds out that Roger is an alien, he is banished into the outer reaches of space, but returns to Earth in a recent episode, having been transformed into an alien himself. Jeff subsequently reverts to his human form after being eaten and reborn by Roger.

Being a Seth MacFarlane show, American Dad! tended to take a liberal bent in its first season. In the episode "Lincoln Lover", for example, Stan unwittingly becomes involved with Log Cabin Republicans, and over time comes to support the inclusion of homosexuals in the Republican Party. The episode "Surro-Gate" even supports the claimed "right" for homos to adopt children. The episode "American Dream Factory" also supports the immigration of dirty, mooching Mexicans into the United States. Later seasons, made following MacFarlane's departure from the show, generally toned down these messages in favor of apolitical comedy.

In the first season, most episodes chronicled Stan having to deal with those pesky liberals, including liberal civil rights activists, the liberal media, his liberal daughter, liberal homosexuals, and liberal affirmative action African-Americans. He usually "deals" with said liberals either through the use of a firearm, or by completely misrepresenting the position of the liberals and annoying them to the point at which they give up and leave him alone.

From the second season onward, the show dropped the political dogma in favor of creative, surprisingly clever storylines.

In the third season, the narrative revolved entirely around Steve Smith and his lack of popularity at Langley Falls High School. To counteract his crippling depression, Steve began trying out (and failing) all sorts of team sports such as water polo and roller derby. Despite the show being called American Dad!, Steve finally achieved success by becoming the captain of the Australian national cricket team. Through his uncanny ability to dance on the middle of the cricket pitch in order to avoid hitting the ball, Steve somehow managed to become the second greatest batsman in the history of the game. The season concluded some 10 years later - in 2018, when Steve was found guilty for tampering with George Papadopoulos' balls in order to gather classified information regarding the Russian interference in the 2016 United States election. As punishment, the International Cricket Council banned Steve from ever playing the game again in any form. Since then, Steve has been forced by law to live out the rest of his life in Langley Falls as his geeky, socially awkward 14 year old self - never being allowed to pursue or find happiness ever again.

During the interim where Family Guy was canceled, BBC had gained rights to reruns of the show, and were scoring surprisingly huge ratings with British audiences (despite them understanding very few of the pop culture references). BBC felt Fox had made a huge blunder in canning the show, and took the opportunity to rub in their fat American faces. They called Seth MacFarlane up, and offered him a handsome sum of money in exchange for a new show without Fox's involvement. Seth agreed and, assembling a crack team of Ivy League graduates, produced a pilot episode in a mere four days.

After Fox decided to revive Family Guy at the last minute, however, MacFarlane thought there was no point to American Dad!, so he departed from the BBC. Mike Barker and Matt Weitzman, two writers from the pre-cancellation seasons of Family Guy (aka "Back when the show was good," according to fans), took over production of American Dad! and steered it in a bold new direction.

American Dad!'s pilot was poorly received by audiences and critics alike. However, MacFarlane's departure from the show strangely (or not) lead to an increase in the quality of AD!'s writing in the eyes of numerous fans and critics.