From Uncyclopedia, the content-free encyclopedia
(Redirected from Illegal aliens)
Jump to navigation Jump to search

Illegal Aliens from Outer Space! (1959) was a fact-based horror film that played in drive-in movie theaters across America. It is widely lauded for opening the eyes of an entire generation of movie patrons to the blood-curdling terror of a heterogeneous nation.

While the roles of the protagonists in the film, the four members of a typical nuclear family, were filled by the cast of television's Leave it to Beaver (Jerry Mathers, Hugh Beaumont, Barbara Billingsley and Tony Dow), the aliens were all played by prominent Latino-Americans. These aliens, or Mexicaliens, were played by such luminaries as Eli Wallach and Lee Van Cleef (both best known for their roles as Tuco and "Angel Eyes" Sentenza, respectively, in The Good, the Bad and the Ugly) and Horst Buchholz (Chico from The Magnificent Seven)[1]. Virtually unrecognizable on screen, they wore state-of-the-art makeup[2] to help them appear suitably swarthy as evil aliens from the planet Mexicon 7 who come to destroy the peaceful suburbs of the USA with their spicy foods, passionate dances and music with lively, erotic rhythms. 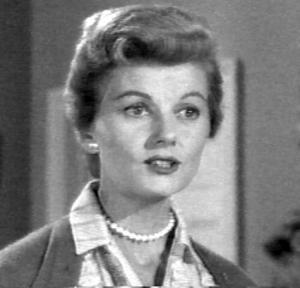 Mary Wilson, taking time out of her busy day to stare blankly off into space.

She is shown wistfully gazing out of the kitchen window, taking drags off her Virginia Slims™ cigarette[3] while pondering just how different her life would be if she hadn't married her high school sweetheart after getting knocked up, settling down, and giving up on her dream of a respectable female career[4].

When her husband inquires about the location of the salt shaker she turns away from the window, narrowly missing the unearthly sight of a giant sombrero-shaped UFO landing some distance away.

At school Steven is working hard at his desk to learn enough to secure a lifelong job on the assembly line at the local engine plant, when the teacher interrupts the class to introduce a new student. 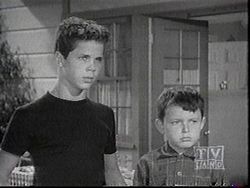 The new kid has dusky skin and the foreign-sounding name of Pedro. He says, in an odd, lisping accent, that he hopes "...to make many friends in America".

The other children pick on poor Pedro, because he has no money to purchase a healthy lunch of Sloppy Joes, fries and cola at the school cafeteria. Steven watches warily as Pedro sits alone and eats a strange-looking and aromatic meal that he pulls from a paper bag. The other children laugh at Pedro's lack of a lunchbox. Steven, longing to fit in, laughs along with the other children.

Things change after school, however, when the school bully pushes Steven down in the mud and threatens to beat him up if he fails to hand over his lunch money. As lunch has already been purchased and eaten (during the school cafeteria scene mentioned earlier), Steven is unable to comply. Pedro, arriving just in time, fends off the bully with his bushy moustache and giant guitar.

Steven and Pedro become best friends, and use the afternoon to go fishing at the local creek. While fishing, Pedro asks Steven if he "...would like to smoke some of the drugs..." with him.

The camera pans left, revealing a giant sombrero-shaped UFO parked on the other side of the creek. 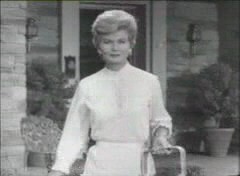 Mary, headed out to the local shopping center, a mere twelve miles away, to purchase new and improved products for her family, like alcohol, tobacco and firearms.

The day after the next day...

Mary is shopping at a nearby strip-mall, as she does everyday, when she bumps in to Pedro's mother, Margarita. Margarita asks her if she would like to visit her family's home for an exotic foreign drink called "sangria" and a mysterious dish called "nachos".

Mary naively agrees, and upon their arrival at the home she remarks on what a nice ranch-style house it is.

The house bares a stunning resemblance to a giant sombrero.

The same day after the next day...

William Sr. is out mowing his well-kempt lawn, as he does everyday after coming home from his vocation as a middle-manager at a branch-office of an unnamed American corporation involved in manufacturing. Confident that he has a job for life, as the unnamed American corporation for which he works will never move offshore for the cheap labor and lax environmental and worker-safety legislation, William Sr. hums and smokes his pipe as he carefully pushes the lawnmower across his flat, treeless yard. 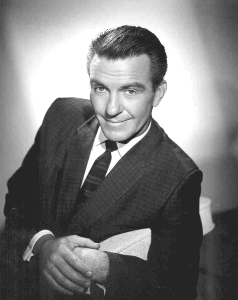 The Wilson family patriarch, William Sr., smiling slightly as he thinks about watering his lawn.

Juan offers to take care of the Wilson family's yard and garden for a price that's so low that William Sr. cannot refuse.

The scene closes with William Sr., relaxing in his favorite chair, watching baseball on the Philco while Juan, outside, finishes mowing the lawn, also outside.

William Jr. is out with his best girl, in the family convertible on Maidenhead Ridge, chastely gazing at the stars while talking about fighting communism. His girlfriend, after a lengthy pause, tells him that she is breaking up with him so that she can "go steady" with Pedro's older brother, Carlos.

She tells him that Carlos is filled with a passion and zest for life that he lacks, as William Jr., like his father, has suppressed and buried his feelings for so long that he is emotionally detached and distant on the outside and cold and dead on the inside. Further, she says that she is madly in love with Carlos and that she's pregnant...with Carlos' baby!

The camera moves in through the open doors and down the center aisle of the Protestant church that the Wilson family attends religiously. An empty space, large enough for a healthy and God-fearing family of four, can be seen on the front row of pews. The minister initially tries to ignore the empty space but eventually switches his sermon from one about something nice that Jesus did to one on sin, sinners and sinning. It ends with "Friends, I have seen the Devil in this very town. Yea, he walks along our fair streets. He, at this very moment, is luring our nation to Hell! Satan is afoot in this town! Repent! Repent!", a speech that was catchy enough to inspire a popular series of bumper stickers[6].

Across the street, meanwhile, the Wilson family is hearing all about the Virgin Mary, saints, sainthood and sacred relics from someone called a "priest" in a different church. 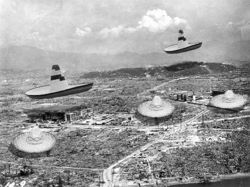 The Wilson's neighborhood, after it's taken over by Illegal Aliens from Outer Space!

The entire Wilson family is shown on the curb outside what mere days before had been their home. Living in the cardboard box in which their new refrigerator was shipped, they are destitute, penniless and completely broke. Even worse, they have no money.

Steven has turned into a beatnik, William Jr. is wearing a sneer and a leather jacket, Mary is full of wine and refried beans, and William Sr., due to lack of exercise, has wasted away to a cadaverous 165 pounds.

Pedro, Carlos and Margarita can be seen inside the Wilson's old home, trashing the interior of their new home. Juan comes out and, using Mary's favorite broom, shoos the Wilsons off of what is now his family's front yard.

In the background, literally hundreds of sombrero-shaped UFOs can be seen hovering over the suburbs. On many other front yards many other unnamed caucasian families sit forlorn; all homeless.

Over this terrible and sad scene of strife and chaos comes the pressing, authoritative tone of an announcer's monologue.

"Just look at what happened to the Wilsons when they failed to heed the warning signs of heterogeneity! Don't let this happen to your town, township or town! Keep America's melting pot full of Americans!"

Featured Article  (read another featured article)
Featured version: 29 May 2007
This article has been featured on the front page. — You can nominate your favourite articles at Uncyclopedia:VFH.