From Uncyclopedia, the content-free encyclopedia
(Redirected from Smoke)
Jump to navigation Jump to search 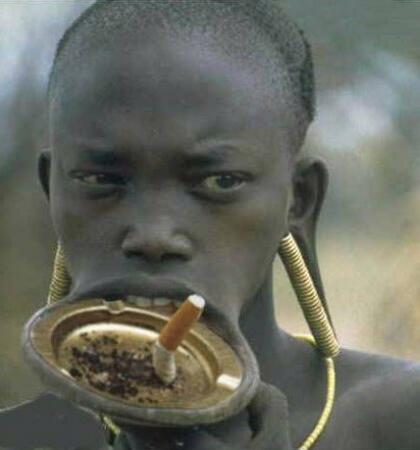 Whoops! Maybe you were looking for Vaping?

Smoking is the act of breathing in enormous quantities of the aerosolized waste products of combusting organic matter. For reasons unknown, this is done for pleasure.

There has been some debate in recent years over whether or not smoking is harmful to a person's health. Some scientists and Al Gore have attempted to further their own political agendas by asserting that smoking can cause cancers, dental fluorosis, and death. While there is little evidence to support this, there is substantial evidence that smoking can make one significantly more popular and attractive.

The pleasant effects of inhaling airborne waste were inadvertently discovered in 1607 by Virginia colonist Nathaniel Ebeneezer Smitherspoon while he was being burnt at the stake by the Jamestown Council of Religious Enforcement for not sufficiently loving Jesus. Smitherspoon got stoned out of his mind from breathing in the heady, intoxicating fumes from his own immolation. Unfortunately, he did not live to pursue further research in this area as he died from an acute case of burning to death a few moments later.

In 1903, the billionaire tycoon R.J. Reynolds began experimenting with soap-bubble-blowing pipes and candy cigarettes by inserting into them various burning substances and testing them on children.

This potpourri of random crap mixed with tobacco became widely popular among early 20th-century hipsters as the practice of smoking was not yet mainstream. 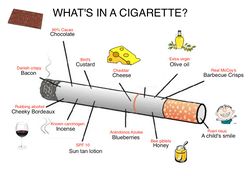 There is much debate about what chemicals cigarettes contain.

The most immediate effect of these chemicals on the smoker is to cause mild feelings of relaxation, euphoria, explosive diarrhea, tension, and nausea. However, you can be assured that, behind the scenes, they're fucking your shit up. Not only do they have unusual and subtle effects, but prolonged smoking can cause mutagenic effects on your DNA. This will most likely turn you into a mutant. And not a cool mutant, like Wolverine, either: think more along the lines of the Toxic Crusader.

Those who smoke a pack a day or more often succumb to compulsive tipping, leaving gratuities of thirty percent or more. Only a civilly worthless cheapskate dork could not appreciate that. In one case study, a three-pack-a-day smoker actually ordered a club sandwich and left the waitress the keys to his Jeep. Researchers have not been able to adequately characterize the specific synergistic effects of the chemicals in tobacco smoke that cause this behavioral change.

Cigarettes have long been known to make you cool[1] – cool like The Fonz. White House scientists hypothesize that the elemental sodium in cigarettes combines with free chlorine ions in the body, causing an endothermic reaction that lowers the core body temperature by seven degrees.

Being cool has some beneficial effects. For example, immediately after smoking a cigarette, it is often possible to turn on a jukebox on simply by hitting it with your fist. Also, if you should find yourself in a hostage situation with a gun pointed at your head, you will be more likely to make sarcastic wisecracks; although this will infuriate the gunman, statistics show that people who make sarcastic quips during hostage situations are unlikely to be shot. They're just too cool. A recent study carried out by the goody-two-shoes people at the Food and Drug Administration also says that after smoking two to three dozen cigarettes daily for six months, the subjects all looked hella dope.

Nazis were the first to suggest smoking was linked to cancer. With this assumption, they regularly filled gas chambers with tobacco smoke to slowly try to give Jews cancer from 1940 to 1945. In fact[Citation not needed at all; thank you very much], Adolf Hitler was so personally disgusted by smoking that he initiated the first and most successful anti-smoking campaign in the world.

After World War II, all traces of Nazi "research" into smoking, cancer, and Nazi hover tanks were lost. It was not until a decade later, after such innovations as cigarettes with asbestos filters, that a link to cancer was theorized by American scientists. Many were shocked at the assertion that breathing in smoke is not as good for you as it tastes.

This "discovery" was believed by governments all over the world who have since enacted policies to make smoking less enjoyable than it already is. When it was discovered that most smokers were literate, the government mandated that cigarette packs come with labels warning of their harmfulness to pregnant women and people with lungs. When it was discovered that people enjoyed smoking while doing just about anything in public, some governments found it necessary to ban smoking while doing anything in public forcing people to stand still and not multitask while enjoying a cigarette.[2] The state of Iowa, where gay marriage is legal, is particularly oppressive of smokers – a person may marry a fag in Iowa but they can't smoke one. Places where smoking is commonly but senselessly banned include elementary schools, prisons, oil mines, hospital maternity wards, and dynamite factories.

Additionally, some guys in California have posited a link between the chemicals in 365,000–1,000,000 cigarettes and cancer. But the jury's still out on this one; maybe one day we'll know for sure whether cancer and cigarettes are related in any way.

Tobacco is a food stuff of negative caloric impact (it take more calories to smoke and digest than you consume), cigarettes exhaust 200 calories per day from the typical smoker. You're losing weight, looking cool, and getting your daily health portion of vegetables.

Smoking is the only known cure for small pox, glaucoma, epileptic seizures, hepatitis C, Dravet syndrome and breast cancer. It may decrease anxiety, and slow the progression of Alzheimer's disease. Smoking may also ease the pain of Multiple Sclerosis, hepatitis C, inflammatory bowel diseases, arthritis, and keep you skinny by helping your metabolism. It may also improve the symptoms of Lupus, an autoimmune disorder. While not really a health benefit, smoking inspires creativity in the brain. Smoking also eliminates Crohn's diseases, soothes tremors for people with Parkinson's disease, cures veterans suffering from PTSD, and protects the brain after a stroke, and or concussions and trauma. It will also eliminate nightmares, cavities, pain, nausea, headaches, bad smells and make you look cool.

It is also a great way to rid oneself of lungs, which are a known to be the main target of the aggressive and dangerous disease lung cancer. Many studies have also found that smokers have a seventy percent higher rate of lung cancer survival. In fact, a medical university in Moscow, Russia, has been researching ways to cure cancer through the inhalation of tobacco smoke, but thus far they have been unsuccessful.

Tobacco also gives people an excuse for social interaction. For example, one may use the phrase "can I bum a cigarette?" in order to play on your recent pattern of selfless giving in order to set you up for the second question, "Hey, you didn't notice when we slipped a bit of that new pneumonia-causing pathogen in your pouch of tobacco when you were staring at the loud distraction we created across the hall for 3.78 seconds?" And then the natural follow-up: "Well, fuck you anyways buddy. You're just hacking and wheezing 'cuz you are a smoker, I'm gettin' tired of conducting these experiments anyways 'cuz you never die or seem to suffer." And that is how tobacco facilitates new and meaningful conversations in the modern and progressive world. 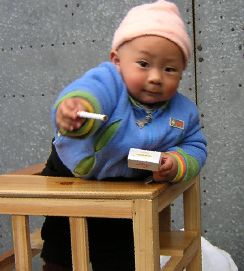 The most popular brand of cigarettes is OP (Other Peoples').

Smoking is an undeniably crucial part of the success of Western society. Social smokers have for years been smoking for the benefit of those around them. Their thoughtful provision of carcinogens and other pollutants has warmed up many bars and pubs in the winter for the benefit of the general community.

The fine folks at Marble Row™ Industries (MRI)[3] have made many advertising slogans to promote their drug, including "Ay yo I don't want yous to bes talking to me until I've had me ciggie" and "Smoking is straight and not gay". They also have paid children's clowns and even bought advertising space on Cartoon Network.

For those without comedic tastes, the so-called experts at Wikipedia have an article about smoking.