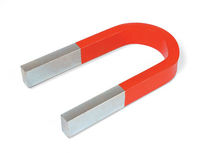 A 'U' magnet, commonly used by the Acme Corporation

“How the fuck do those work?”

“You are obviously not a chick magnet.”

“Thiz might not have anything to do with Magnet, but Obama zuckz.”

Magnets are the most confusing part about science.

A magnet is a magical device that attracts other things to it. The significance of magnets in today's society is fiercely being debated, and it is believed by most scientific communities that the only use for them is to stick crap to your fridge.

Fuckin' magnets, how do they work?!

Magnets were invented by James Hetfield in the mid 1800's when he tried using several different objects to stick his daughter's drawings on his refrigerator.

“First I tried a nail, but I damaged my fridge and had to get a new one. Then I tried some glue, but then I couldn't take down her old pictures. Then I tried time-varying electric flux through a loop of wire and voila! The pictures just stuck.”

Ever since, magnets have been used across the world to hold important documents to paramagnetic surfaces like refrigerator doors and chalk-boards. Although further research into magnets is still on-going, there is little evidence of further applications of magnets to everyday life.

“If N is North and S is South then where is East and West?”

Contrary to popular belief, they stick to stuff. Kind of like leeches stick to skin. But magnets don't suck blood, unless they are VAMPIRE MAGNETS which do not like sunlight.

Regular Magnets do however enjoy sunlight, they also tend to enjoy long walks in the beach and shopping at stores that smell of perfume and insecurity. This has caused the magnets to be taunted by some of their more "manly" companions, such as the nail and the duck tape. 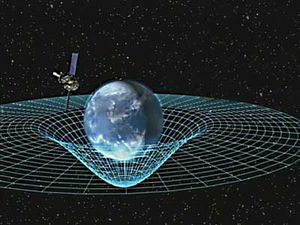 How magnets control orbits. Or something.

Magnets are the governing force that hold things together. Large magnets form easily in a vacuum, pulling matter towards them until they finally ignite to form stars. The Milky Way, like all galaxies, is held together by a very large magnet. Larger magnets collect more matter, and so a magnet of sufficient size will draw smaller magnets in to form big swirly bands of stars. The Large and Small Magellanic Clouds are galaxies whose magnets are smaller than that possessed by our own galaxy and as such they are slowing being drawn into the Milky Way.

Because of their size, large magnets glow. It is important to note that the moon glows only with the reflected light of the sun, as the moon itself is insufficiently magnetic (see below). Stars die when the magnetic force inside them reaches a critical mass due to the absorption of smaller magnets draw in to them by their own attractive force. If this happens enough, a Black Hole is formed in which the magnetism is so great that nothing can escape.

General Relativity states that magnetism causes space-time to curve in new and interesting ways, leading to phenomena like black holes and the way that stars eventually collapse in on themselves.It is conjectured that the Big Bang was itself caused by magnets, although our own understanding of physics and magnets does not yet explain quite how that worked.

If a magnet rotates fast enough (possibly as the result of a curling accident), the magnet will begin increasing in mass until it collapses in on itself. Then the magnet increases in size and decreases in mass, continually fluctuating in size and mass as it moves toward the North Pole. When it reaches the North Pole, it contracts until it forms a large ice crystal, which will stay until it reaches absolute zero. It then starts to rise by the equation of velocity magnetics:

Tiny "magnetettes" are far more common than large magnets (which many believe to have formed from these smaller units). Each atomic nucleus contains one magneton, the elementary particle which controls the other particles and helps give each element its unique properties. Thus we can see that all of chemistry depends on magnets. The more magnetic a substance is, the more magnetons are to be found in the neutrons and protons inside it.

"Non-magnetic" substances are those whose magnetism is too weak to attract anything larger than incredibly small things that don't actually exist. The moon is "non-magnetic" and is thus held in only by the large magnet at the centre of the Earth. 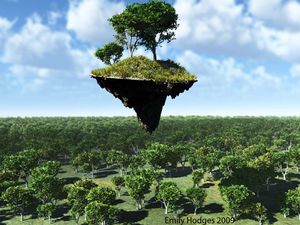 A rare natural disaster that happens when the Earth's magnetic fields get lost in a cloud. Extremely dangerous if victim is on area of attraction.

Since biology is in essence just a spin-off from chemistry, it too is strongly influenced by magnets. Magnetons exist in the base pairs of DNA, orbiting each other and creating the energy that allows organisms to grow. As we grow older, our magnets slow in their movement, and so we shrink again because of the attraction of each cell to every other cell.

In humans, the red blood cells are composed largely of very small magnets. Magnets also control the release of hormones and the formation of enzymes. Our bodies have their own magnetic fields, which are in most cases in harmony with that of the Earth. However, the magnetic extremes at either of the planet's own poles can lead to disruption of this field, which is why people at the East Pole are so short and why no one can live at the West Pole. 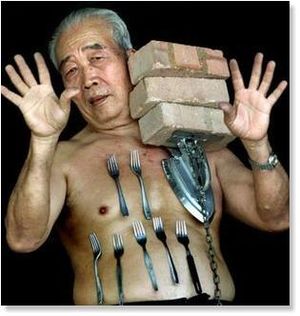 What happens when you eat magnets.

Interesting and charismatic people attract other because they have more blood and thus more magnets. It is for this reason that we have the phrase "magnetic personality". unfortunately as these people grow older their bodies due to the extreme magnetic forces at work collapse, which is why most short old people are relatively nice.

Oscar Wilde was composed almost entirely of red blood cells. It is thought that Casanova's unusual attractiveness was caused by the regular ingestion of small magnets, as his body possessed the rare ability to assimilate these.

Shaggy 2 Dope and Violent J of the Insane Clown Posse is currently head of The Magical Juggalo Committee On the Properties of Magnets. In ICP's latest masterpiece, Mr. 2 Dope boldly proclaims, "Fuckin' Magnets!" After this he continues to shock the listener with his amazingly deep intellect by switching things around and asking,"How do THEY work?" Unfortunately, this song has led to the deaths of several juggalos who in attempting to grasp their minds around the properties of magnets, accidentally bled to death internally from all the magnets and bottles of Faygo they had inserted in their anuses.

It is a well known fact that computer systems thrive when in contact with magnets. If a magnet is not attached to the computer you are currently using, please fix this immediately. Also if using a public computer system such as one at a library, make sure you notify the person in charge so that they can thank you for improving their systems.

As everyone knows an athlete that respects himself eats nothing but magnets for breakfast. If he didn't, he'd become a white fatty nerd on every full-moon.

Things to do with magnets[edit]

1. Make a car that propels itself forward via magnet power to save moniez on a car (brotip: in doing so gas companies will go bankrupt.)

2. Put one on top of a table and move it with another magnet underneath the table, your (imaginary) friends will be amazed at your wizardry.

3. Take 2 magnets and walk into a morman's house. Ask them for an explanation on how magnets work.

5. Go to the moon by countering Earth's magnetic field with your own huge magnet.