“If you don't finish that, I'm gonna freeze your sister and make you eat her!”

For those without comedic tastes, the so-called experts at Wikipedia have an article about SubZero.
“I've never met a man who could both ignite the flames of my heart and chill the latte in my hand.”

A native inhabitant of Iceland, SubZero Kierkegaard is an actor and shock artist more akin to a renegade super-refrigerator than a human. Born with the power to freeze people, he's often spotted lurking just outside of discount shopping centers across the globe, a prime location for collecting art. He has been known to hide in bushes, trash cans, and hand bags, then freeze his unsuspecting target and haul them off to be displayed in his art galleries. When not indulging in the morbid arts, he competes in Kung-Fu tournaments, his destiny controlled by remote beings with greasy fingers. Due to his celebrity, he is also a representative of Ice Kream brand frozen snack treats.

SubZero was already quite the troublemaker before he was even born. His presence in utero was frequently felt by his mother, manifested in the form of many symptoms, including frequent cold flashes, icy urine, and a sudden frozen death . Born Darrin Fletcher in the year 1 B.C. (hence the name) SubZero was born in the middle of a great blizzard; the cold was unbearable, painfully killing his mother while in labor. Miraculously, SubZero froze to life and instantly blossomed into a fully fledged ninja. On the day of his birth, Subzero actually managed to fight off the doctor attempting to spank him by stabbing him with a nearby passing shuriken.

While training with his master, SubZero eventually learned that he could make beach balls float merely by standing there and looking cool. Using this talent he performed for change on the streets of San Francisco, until he had enough money to buy a video camera. The performance tape he submitted to YouTube caught the eye of a very auspicious director who was filming an action movie which he intended to call "Attack of Sissy Mountain." After being picked up for a part in the movie, Subzero suggested that the name be changed due to the fact that the title was "Totally gay." The director then changed the name of the movie to "Mortal Kombat."

From the very first day of production, Subzero commanded the attention of all by throwing daggers at anyone who wasn't looking in his direction. Word of these spontaneous and prolific stabbings generated tons of positive buzz, causing many to speculate on whether or not the movie would become focused on him instead of the script's protagonist, Some Asian Guy. The producers refused to publicly comment on the matter, though SubZero was killed off in the final script as an effort to dispel the rumors and criminal charges. Another theory has recently arisen, suggesting an alternative motive for the script change: the catastrophic and bizarre love triangle between SubZero, director Gus Van Sant and co-star Another Asian Guy.

Nevertheless, the public eye remained on SubZero. Dissatisfied with script changes and Van Sant's mediocre handjobs, he began working with other movie producers behind the scenes to get some additional publicity. Some of the more noteworthy appearances were his brief cameo in bootleg home video copies of Joel Schumacher's[1] Batman and Robin as villain "Mr. Cold,"[2] and his short face-time with Wesley Snipes in some Blade sequel[3]. However, his appearance in the Wizard of Oz, as the Wicked Witch of the West, gathered most of the attention, as not only did he travel through time and space but also underwent a series of augmentive surgeries to appear as a woman.

During the scenes in which SubZero would fight, the directors would have a hard time finding ways that he could be defeated, and had to settle on some impossible maneuver where a "supernatural bucket" was used to defeat him. Despite this embarrassing on-screen demise, he gained great popularity with crowds, who saw him as having an aura not unlike that of deceased martial artist Bruce Li, and also as being "that cool blue dude."[4] 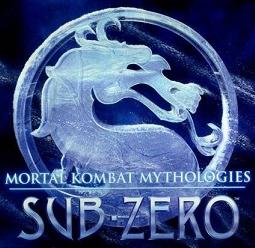 SubZero is the only character with a mythology, because all the other kharacters are suckers.

Since the Mortal Kombat video game came after the movie,[5] Subzero was already a favored character even before the game was slated with a solid release date. The game's story mode had you pitted against a computer-controlled opponent that usually cheated against you, and it was your goal to defeat them or throw your controller at the screen in a manner that either the controller of your screen broke. Most people only did the latter, but the few that actually managed to defeat the computer got the ultimate prize: the ability to lose against Goro, who was basically a beefed up version of SubZero with 4 arms, 2 legs, and 17 heads. Goro couldn't freeze people, but did make them fall down and die, a slightly deadlier alternative.

Many discerning players of the Mortal Kombat video game noticed that SubZero had an yellow doppelganger named Scorpion who copied Subzero in every way except that instead of ice, he used fire. Hot fire (not cold fire, which is one of Subzero's special moves). He also got a pimpin chain he uses to get his bitches the fuck over.There was an outrage concerning this and many orange ninjas were killed by crazed fans of Subzero who were hysterical over this breach of character. Never the less, Scorpion managed to gain a small following of zealous fans who supported him through this endeavor, despite the fact that he was not even a real person.

From what you can see in this picture, SubZero is engageing with a wild Scorpion in hand to hand Kombat in front of a crowd of spectators! (Note the ghost like figure behind SubZero) This is a wild "Chuck Norris"!

SubZero himself had no comment on the issue, as he found that the whole situation "did not require revenge served at a temperature below 32 degrees" and stayed out of the conflict until the movie "The Scorpion King" stirred him into action, causing him to freeze all scorpions across the globe in carbonite. He got the idea from watching the Star Wars trilogy and thought it was "totally cool." As he did this on an individual basis, it took him many years and still occupied him well into old age. Sub Zero Wins!!!!! Flawless Victory!!!! Fatality!!!! I am so much more awesome than you 'cause I can freeze shit up and hit em into the air and freeze em again. I'm the BEST!!!!