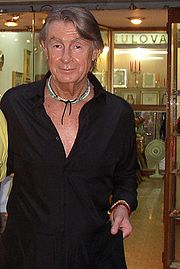 Schumacher on the down-low in 2003, hiding from angry Batman fans.

Joel T. "What Does the 'T.' Stand for?" Schumacher (August 29, 1939 – June 22, 2020) was an Oscar-worthy gay American film director. He was best-known for his campy Batman films Batman Forever and Batman and Robin, which unfortunately overshadowed his grittier films like The Lost Boys, Falling Down, and 8mm.

Schumacher was born in 1939, during the outbreak of World War II. As his mother was constantly paranoid due to the war, she usually walked around in a twenty-three-piece suit of leather armor, with exposed nipples to allow breastfeeding. Although very young, this image would stay in Schumacher's mind for the rest of his life, and crept into many of his masterpieces. As a young man on the run for allegedly slaying Jason Patric, Joel's fixation with leather led him into a biker gang of marauding vampires. Staking the leader twenty-three times with one of Arnold Schwarzenegger's icicles, Schumacher assumed leadership of the gang and was granted immortality.

In 1981, Schumacher met producer Lilly Tomlin, who immediately recognized his potential. From then on, he embarked on a long and successful career. His credits included The Incredible Shrinking Woman, an adaptation of the classic novel Little Women; The Lost Boys, about a gang of vampires; St. Elmo's Fire, about college graduates in D.C.; and Falling Down, about working-class disenfranchisement and lone wolf domestic terrorism — all loosely based on people Joel knew in his formative years.

For those without comedic tastes, the so-called experts at Wikipedia have an article about Joel Schumacher.
“Grown man wearing a rubber suit... hanging around with a young boy! I don't need to have X-ray vision to see what the hell is going on there!”

In 1992, gothic director Tim Burton was fired from the Batman franchise by Warner Bros., as his interpretations were deemed too dark and violent for a young demographic. His second Batman film, Batman Returns, had sent small children running out of the theater in terror, and Danny Devito-themed Happy Meal toys were quickly recalled. In 1995, Schumacher was hand-picked by Kevin Smith to direct the franchise's campy kid-friendly third film, Batman Forever, with Burton being kicked downstairs into the producer role. The leftover Burton influence resulted in Forever having a confused tone, not knowing if it wanted to be a comedy or a drama.

In a career-defining move, Schumacher boarded the franchise with enthusiasm, and finally got to realize his dream of rubber-suited nipples on film. Val Kilmer starred as the titular caped crusader Batman, while Chris O'Donnell, despite being 25 years old, bravely decided to step up and play the part of 16-year-old sidekick Robin. Jim Carrey was cast as himself, turning up on the first day of the shoot in green spandex and a ginger wig. Having injected a fistful of meth the night before, he had no idea where he obtained these items; nevertheless, Schumacher loved the look. Despite not receiving skin grafts from his recent facial injury, Tommy Lee Jones was cast as Two-Face, yet seemed to think he was playing a Jim Carrey clone with his over-the-top facial expressions and constant cackling. In her peak of beauty, Nicole Kidman was cast as Batman's thirsty love interest, Dr. Chase Prime Meridian Vase. The (literal) passion of everyone involved on the project ensured a large box office gross, lukewarm audience response, and a cool soundtrack featuring U2 and Seal; a sequel was inevitable. 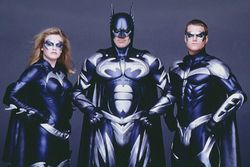 According to Schumacher, the heroes' shapely rubber nipples, crotches, and asses here were modeled after that of Greek statues.
“And to you, my darling Urma, I leave my collection of novelty icicles. Hold them close to your heart, and get that bat bastard if you can.”

~ Mr. Freeze on his will

In 1997, Schumacher returned to direct the next Batman film, Batman and Robin. This became the most important film in his career; with Burton no longer a producer, Schumacher was off the leash and given free reign to realize his full-camp extravagant vision. George Clooney played Bruce Wayne this time around; the film took the character in a radical new direction, finding Batman on the run from severe charges of ice endangerment and maxing out his Bat Credit Card. Sending Robin and new sidekick Batgirl to fight Arnold Schwarzenegger and a misshapen clone of Uma Thurman, Batman himself was occupied with poisoning his butler, Alfred, in order to sever the final link with the Tim Burton films.

Largely due to the improvised performance and one-liners of Arnold Schwarzenegger, the film received universal critical acclaim and seven Oscar nominations. In his review, Roger Ebert said "I was glued to my seat watching this pile of ice. Batman & Robin, unlike the drab Burton films in the series, is wonderful to look at, and has everything authentic at its frozen core." However, it dovetailed among close-minded Internet fanboys, who frantically rushed to their computers to type several million Batnipple and Bat Credit Card jokes. They gave the film the cold shoulder with a chilly reception, describing Schumacher's Batman films as "crimes against humanity"; heartbroken, the director hibernated for two years. Plans for him to direct a fifth Batman movie, titled Batman Triumphant or Django Batman Unchained, were cancelled; "Glad he didn't make Batman Exodus or Batman Genesis," quipped Harry Knowles of Ain't It Cool News. For years, the Batman franchise and Schumacher's career were on thin ice, but once the fanboy brigade cooled down, the Warner Bros. rocket-launcher penguins marched into the new frozen river that was Batman Begins, directed by Christopher "Big Guy for You" Nolan.

Schumacher awoke in 1999, determined to return to his roots with more horror-oriented movies. In a sleep-induced daze he directed the mystery thriller 8mm, starring Nicolas "Firebombed Hairline" Cage as a private investigator who watches snuff films. The film was a box office success but received negative reviews from critics, who were naturally repulsed by its premise. Schumacher followed this up with the further films Flawless, Gossip, Tigerland, Bad Company, Phone Booth, Veronica Guerin, The Phantom of the Opera, The Number 23, Blood Creek, Twelve, and Trespass, each with varying levels of success. He also directed a music video for the System of a Down spinoff band Scars on Broadway, and directed two-card monte episodes of the television series House of Cards.

In 2012, Schumacher found that Christopher Nolan's The Dark Knight Rises had been released, even bigger than Schumacher's last masterpiece Batman and Robin (both movies featured noted Big Guy Bane). Believing it to be his own work in a laughing gas-induced daze, Joel decided to retire from directing, his life's work accomplished.

Schumacher died of cancer in 2020. He was buried in Gotham, next to Batman's butler Alfred. His grave has become a Mecca for reformed comic book fans everywhere, who used to hate on Joel but regretted it when he passed away. Colin Farrell visits the tombstone every Christmas, as respect to Schumacher for launching his career.