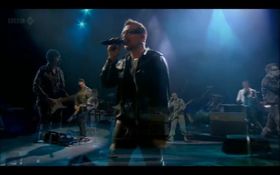 U2's Bono & The Edge are so important that they show up on stage twice.
“Here is what we do. We must leave the world thinking that you’re tougher than me. Crash in to Soviet one of your planes. You will play hardball on us. We know I b*t**ed you back in ‘56, but none else will find that out”

~ Khrustchev on the line to Eisenhower

U2, formed in Dublin in 1976 and still an Irish rock band from England (and who gives a shit?), at first consisted of Bono (vocals), The Edge (guitars), and two other guys (bass and drums, respectively). After 1993's Zooroopa, the band reorganized its personnel; the current lineup is now Bono (vocals) and some other nameless guys (non-vocals). Bono has cited both "a need for change" and "a stronger focus on charitable endeavors" to be the driving forces behind the reorganization, but those other guys insist it's just another way of "Bono being, like, a huge dick to everyone else".

Critics are inclined to agree with these anonymous bandmates, though the public at large finds Bono's scenery-chewing douchebaggery appealing. Indeed, many fans don't see Bono as a douchebag, but as somebody who's "stylish", "cool", and "noble". Experts have said that Bono's rising popularity with the people indicates that the public itself has become increasingly douchey and arrogant.

The radical change in the band's image over time can be seen as U2 "evolving" from playing hard-hitting rock music to whatever it is today. Essentially now playing Bono's melodious voice over and over again over all sorts of weird orchestra music and some sort of muddled-reverb once identifiable as "guitar", the sound can be compared to a seal slaughter recorded in slow motion.

U2, one of the most successful rock bands of all time, has somehow sold over 150 million records worldwide, won 22 Grammy Awards, been inducted into the Rock and Roll Hall of Fame and, due to an administrative error, was named "Breakfast Cereal of the Year 2009".

For those without comedic tastes, the so-called experts at Wikipedia have an article about U2. 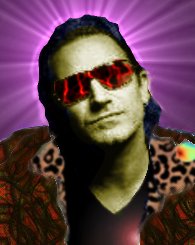 Larry Mullen Jr, one of the non-Edge/Bono musicians in U2, started the band via a bulletin board announcement at his inner-city Dublin middle school. Bono would later nudge his way into the group at bassist Adam Clayton's[citation needed] Sweet Sixteen. His classmates, aided by copious amounts of liquor, were boggled by Bono's[1] skyscraping vocal talents, uncannily good for a mere 16 year old. Amidst handshakes, hugs and raised glasses, they invited him to join the band. Later, when the kids sobered up, they discovered that Bono's vocal behavior was too true to be good.

The band were known for about ten minutes as "The Larry Mullen Band". This caused a considerable strain within the group, predominantly due to the extremely vocal objections of its singer/guitarist Bono, who wished to change the name to "Bono and his Traveling Troubadours". At their first gig, however, the band became known as "Feedback".[2]

The band's lineup at this stage included The Edge's older and more musically talented brother, Dik Evans, also playing the same homemade guitar. As it became quickly apparent that they had a true musical genius in their midst, Bono manipulated the group into getting rid of him, arguing that they had too many members, too many guitarists, and too many Diks.

The Band Formerly Known as Feedback officially changed its name to You Too in 1980, when The Edge discovered that Bono shared the same sexual fetish as he.[3] The name was hastily shortened to U2--a seemingly meaningless combination before the age of text messaging--to avoid suspicion from the rest of the band, who were a notoriously vanilla group.[4] 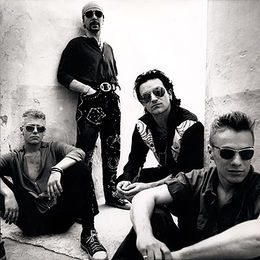 The first signs of change appeared after U2 released their 1993 album Zoororpa. Bono, who had always appeared as a simpleton with unkempt hair and clothes bought at a low-end flea market, began wearing very expensive-looking shades while promoting the album. Realizing his shades weren't gelling with the rest of his wardrobe, he decided to change his entire look. Unkempt hair was replaced with stylish-looking unkempt hair, checkered shirts and cargo pants were replaced with a Czech leather jacket and leather pants, and he even began sporting a blingy gold chain for good measure.[6]

As bigger and flashier arenas opened their doors to U2, their stages began to get increasingly glamorous, with lighting and smoky effects becoming an integral part of their performances. In what many people now view as a circular but calculated move, these visual effects often obscured most of the band members, so that only Bono, and at times, The Edge, were visible to the thousands of people being enthralled by the band's clearly mesmerizing performances. Needless to say, while Bono continued to climb the ranks of publicity every time U2 performed to a sold-out arena, the remaining band members were "accidentally" lost in the smoke haze and strategically-placed strobe lights in the arenas, their hotel rooms, and during Bono's media interviews.

The change in the band's musical style had already began showing once U2 released their 1991 album Achtung Baby, but after the release of their 1997 album Pop, it became clear that the band wasn't even going in the direction Achtung Baby indicated. A departure from their earlier raw guitar-based music, the album took the dance-inspired nature of Achtung Baby to a whole new level.[7]

While the press and public embraced U2's 1980's work as "innovative," "stylish," and "daring," critical backlash began to hit the band after a series of overambitious '90s albums, which were panned as "inventively repetitive," "stylishly sucktacular," and "daring to do nothing interesting at all." The most curious backlash to U2's negatively evolving state came from the band members themselves. "Bono sucks cocks" is the most often heard backlash of all.

Trying to appeal to an even wider audience in 2002, U2 performed during the American football Super Bowl Halftime Show,[8] surprisingly to both commoner and critical success leading up to winning an additional 4 Grammy awards for the album All That You Can't Leave Behind and a Kid's Choice Award in the category of "most Irish" which the band rode until "Vertigo" was released, causing a dizzying drop of loyalty across a wide spectrum. A 3-D concert film, U2 3D capturing additional songs from How to Dismantle an Atomic Bomb did nothing to counter the fallout.

U2's twelfth studio album, No Line on the Horizon was a tongue-in-cheek joke referring to pre-ticket sales in upcoming tour cities for the U2 360° tour.

Since the 1980s U2--and Bono in particular[9]--have been active philanthropists and charity campaigners[10]. They took part in Band Aid, Live Aid and Kool Aid to raise both money and noise pollution levels for starving Africans. The endeavors were a huge success, and Ted Chump - then editor of the NME - personally offered 1 million pounds to put an end to all performances of Do they know It's Christmas? Fortunately for Africa, this didn't stop Bono.

Bono's sole line in Do they know It's Christmas? was considered a highlight of the song; with critics praising the "raw power" of his delivery. In just nine words he demonstrated to the world that he cared about Africa more than any other hired celeb... and considerably more than The Edge, and the bassist and drummer too, who didn't even perform on the song because they were too busy wasting time in Ethiopia building schools and wells.

Even in the 21st Century the band still campaigns tirelessly against poverty and social injustice, though they aren't without their detractors. Their efforts to spread good karma are considered by many to be making amends for the song Vertigo, and their various charity singles have been dismissed as little more than distractions from the fact that Bono hasn't taken off his sunglasses since 1993. In response to Bono's ego, Amnesty International recently released the following statement:

Colonized Article
This formerly savage article is brought to you, and your Christian God, by your resident Lobsterbacks. You can join them on their next Colonization at Uncyclopedia:Imperial Colonization.
Retrieved from "http://en.uncyclopedia.co/w/index.php?title=U2&oldid=6129801"
Categories: