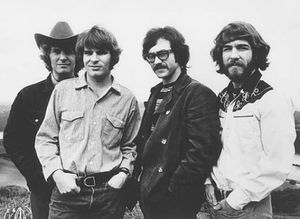 For those without comedic tastes, the so-called experts at Wikipedia have an article about Creedence Clearwater Revival.

Creedence Clearwater Revival (sometimes shortened to Creedence or CCR) was a "bluesey" (whatever the hell that means...) band from the late 60s to God knows when. Spearheaded by John Fogerty, the band was originally called the Communist Compliance Rangers, but controversy arose during the Cold War when those Capitalist sonsabitches made them change their name to side with the American government. CCR officially changed it's name to CCR. The new CCR stood as Creedence Clearwater Revival, and to this day no one knows what the fuck that means. Their biggest hits were: "Who will stop the rain?", "Have you ever seen the rain?", "Singing in the rain" and "It's raining again". Their music is often placed under the southern rock genre due to their origins in Antarctica.

CCR has a long and winding history of drugs and songs and other related memorabilia. They were sucked into the vortex of greatness and no one has ever been able to reach them, though they encountered William Shatner, their chief rival.

The band was founded by guitarist John Fogerty in the late 1960's. They were so big at the time that they even got an invitation to Woodstock, the uberconcert of world history. Despite the fact that their performance is regarded as one of the best live performances ever in the history of live performances, it isn't even on the Woodstock Movie. I swear to God, I will track down whatever fancy fuck made that piece of shit and make sure he is mouth fed spoonfuls of his Janis Joplin lover-boy Woodstock video. I mean, it's fucking CCR at the fucking Woodstock. You think that you could even pop in two seconds? No? Well FUCK YOU!

The group played at Woodstock but their performance never made it to video.

I'm sorry, I get emotional when I talk about Woodstock. I had a rough night. Anyways, they showed Jefferson Airplane but not CCR? Pft. They can suck my cock. I'm so fucking pissed off right now. I just want to kick some ass. Anywho, Woodstock wasn't all that great anyway. The Beatles weren't even there! Nor were the Rolling Stones. And the Who sucked at Woodstock. By the time Jimmi Hendrix got to play everyone left. That really sucks for him. It's because he's black isn't it?

Oh, wait. I'm supposed to be talking about CCR, right?

This is the fun part of CCR's history because it is the meat of their historical sandwich. This is that hammy and cheesey of their formation and breakup bread. This is what makes any sandwich good after all. I actually don't know much about this part. You never see the hammy, you just eat it and expect it to be there. You only see the bread slices. Of course, you might see a little dimple of hammy or cheesey sticking out of the side just enough to observe. This reminds me of something, but I can't remember what it is. The good thing about their magical sandwich history is once you find out that there was a peice of bacon on top of their meaty meatness it just makes you want to curl up in to a ball and throw skittles at a midget. As we go through CCR's history we find out that they forgot to put pickles and lettuce on their sandwich, and thus made the song Unfortunate Son, about a young man who had to return his sandwich because it was made incorrectly.

As John Fogerty tightened his grip on his motorcycle, he knew he had to speed up to keep pace with the forlorn train that had the evil Bon Jovi holding his beloved Madonna hostage. He jumped onto the port side of the train and slid his way into the poisonous invisible crocodile car as the enemy gunman closed in on him. If he didn't kill Bon Jovi before the train reached the volcano, he knew that all the Asians in the world would die. Just as he reached for the cabin door, one of the vicious beasts lurched on his leg and tore it off!

No time for crying however, there was a baddie to kill. He hopped on one leg to the main cabin to find it infested with stunt doubles for Charlie Sheen! Pulling out his velvet revolver and killing all of them was no easy feat. He learned a gun trick from his experience in World War XLII (The one where Tom Petty had that awful halftime performance). 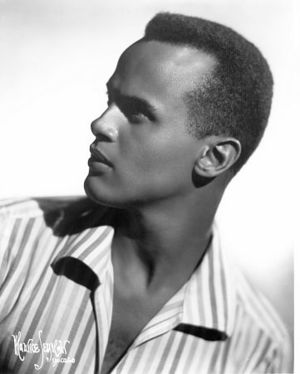 Harry Belafonte was the group's calypso singer for one month in 1984.

In 1974, the cowboy said goodbye to his bandmates to try out his solo career. After it ultimately failed, he began acting and became a minor celebrity in the 2000's. The next lineup replaced the beloved mascot with Sebastian the Ibus from the University of Miami. The Hurricanes where unknowns at the time, but after a few short years with the band, the Miami Hurricanes won their first of many national championships in 1983.

After their first national championship, Sebastian the Ibus returned to Miami, leaving the band in need of a calypso singer in 1984. They recruited the likes of Harry Belafonte, singer of the famous "Day-O". After less than a month, the entire group split up due to musical differences. Henry Belafonte continued political work with John Fogerty, Ben Stein went into acting and the Cowboy used a time machine to go back to the 1970's where he starred in many Western specials for little children who had too much sugar in their cereal.

Despite the fact that CCR had little to nothing to do with disco music, they still have a disco-geography, a sandtable map that has every disco song that the band performed.