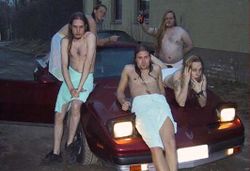 One of Children of Bodom's most masculine pictures to date.

Children of Bodom, also known as Children of Sodom(y), are a 5-piece melodic-death-techno-gangster-rap polka-satanic-metal band from and formed in Espoo, Finland in 1922. The band consists of Dyslexi Laho on the lead ukulele and lead vocals, Henkka T. Blacksmith on bass guitar while nude (with various groupies and rabid fangirls sucking him off while playing), Roope Q. Latvala on rhythm ukulele, Jaska "Thunder Thighs" Raatikainen on the bongos, and Janne Warman on the xylophone.

Children of Bodom tour the world with their warm-up act, Nipples, the breakdancing monkey, and various satanic polka bands on different tours.

This band has been noted for being more gay than Rob Halford dressed as Richard Simmons while dancing to "It's Raining Men" at Disney during a Gay Day. When Alexi heard this comment, he replied "Oh no no no no I'm not gay! I just like to fondle with men occasionally. I actually dig old ladies way more than men!" This line gave inspiration to the popular Nick Jr. TV show Metalocalypse, in which the character Skwisgaar (who looks just like Alexi, but a little taller and a little less gayer looking) has fantasies about GMILFs.

The Story... of Bodom[edit | edit source]

Up high in the Metal Heavens, Metal Jesus and his guardians, the Lower Metal Gods (formerly known simply as the Metal Gods until the title was given to the Higher Metal Gods), decide to create five metal demigods to bring the gift of metal to Finland because all the poor Finnish people have to listen to is Michael Bolton and Blue Man Group. With his mighty powers, Metal Jesus created 6 seeds (he had problems counting as a child), but needed a human vessel to deliver them into the mortal world. He eventually chose Shiterly Gross, the future wife of one of the demigods, because he thought she would be useful and treat the Children as her own, which they were (sort of).

Shiterly failed to understand Metal Jesus's instructions (he had many spelling errors in the letter, and had dyslexia as a child as well, which passed on to one of their children, Dyslexi), and ended up traveling to Sweden instead, where she was nearly pwned by a Grue but survived because Metal Jesus willed it (he wasn't willing for her to die yet, and thought finding another vessel would be a pain). She then ran off to Norway and Metal Jesus visited her in a dream to yell at her. For inconceivable reasons, he fell in love with her and they were married in a later dream, which was purely to pacify the religious twit(s) who may have been watching from Heaven, who didn't appreciate pregnancy without marriage. This story of Metal Jesus's marriage to Shiterly Gross has become a popular Finnish fairytale.

When Shiterly Gross woke up from the dream in which she was married to Metal Jesus, she found herself in Espoo, Finland, in a McDonald's playplace. Her water broke. Her screams of agony startled Ronald McDonald, who was making "special sauce" for the Big Macs. He helped deliver the Finnish sextuplets who would soon become world-renowned musicians.

Shortly after the birth of the six, Ronald spirited one of them away to an unspecified location, and there were five left. Metal Jesus came down from heaven in a shower of nuclear waste (he is Metal Jesus, after all) and took Shiterly to the Metal Heavens. The five remaining were spread out across Finland by Metal Jesus, who, it turned out, didn't really care about them and only cared about Shiterly.

The Childhood... of Bodom[edit | edit source]

The Children were spread across the globe, but eventually all found their way back to Finland.

Dyslexi (sometimes called Alexi), who inherited and was named for his father's dyslexia, even though that is impossible, was sent to live with a French prostitute known only as Laho, from whom he took his last name. His foster mother, using her magical powers, was able to place him in a boarding school for musicians at age 6. From then on, he did not have any contact with her. He first learned to play the violin, but after an unfortunate incident involving his ass and the violin, he switched to the ukulele, which was foolproof and made it nearly impossible for the same incident to happen again.

Henkka was adopted by a nudist family after being found naked and bleeding from every orifice in a forest in Lapland. He had been gored multiple times by a herd of savage moose and, later, a polar bear. He was homeschooled by his father, Torso Blacksmith, who taught Henkka to play the bass with both his hands and his penis. Henkka learned to play bass guitar because basses are larger and cover up more of his body. During shows, he must stand behind his amp to avoid being arrested for indecent exposure, and also to avoid having rabid fangirls attempt to blow him while fingering his asshole.

Alexander, the oft-forgotten one, was taught to play the ukulele by his adoptive family, who were all anorexic and forced him to eat all the food in the house so as not to arouse suspicion from their neighbors. His story of creation was quite odd, as he did not have as much metal in him as his siblings did (Metal Jesus made a mistake). He later left the band due to his whiny girlfriend and also because he was being a pussy, and was replaced by the tr00 metal rhythm ukulele player, Roope Q. Latvala.

Jaska was adopted by an obese family who fed him too much, earning him the nickname "Thunder Thighs". Upon joining the band, Jaska had no musical experience or talents other than to hit a bowl with a spoon when he was hungry. Realizing his one skill, Henkka eventually gave him a pair of bongos so he doesn't have to get off his ass to be brutal.

Janne was adopted by a homosexual Viking couple, Asbjorn and Thorsteinn Warman, who got together while being alone for weeks on a boat sailing to Norway. Janne's second father Thorsteinn divorced Asbjorn to become a Christian (he abandoned the Old Ways eventually) and disappeared from Janne's life, leaving him only a xylophone to remember him by. Janne then vowed to master the instrument and become world famous so his other father would come back to him. He has so far not succeeded.

Roope, the current rhythm ukulele player, who replaced Alexander, was aptly named, as he was adopted by a family of midgets, who used him as the "rope" to hoist them up to places they otherwise couldn't go. He joined the band Scone at a very young age, but later quit. He was a self-taught rhythm ukulele player.

The Rise... of Bodom[edit | edit source]

One day Alexi randomly remembered his brothers and looked them all up on Myspace. They were very easy for Alexi to find, since all their names were weird. When they all reunited in a bar in Helsinki, although they were all blatantly underage, a black glow shone upon them and a bucket of oil from the BP oil spill fell upon them. It was a sign from Metal Jesus (who had been watching them all along) that they should start a band. (They were later able to clean up the oil that spilled with their newfound metal powers. Maybe the government should try that instead.)

They eventually named their band Children of Bodom, after a gruesome lake murder that took place in Alexi's hometown, where they all wanted to die someday. At first, COB were a Village People cover band. They soon stopped that after a show in San Francisco, when a group of men in leather were aroused by the nudist Henkka wearing only in an Indian headdress, and mauled and nearly raped him with raw meat and cucumbers.

In 1923, the band used this awful experience to make their first studio album, "Something Wild (in my Pants)".

The Recognition... of Bodom[edit | edit source] 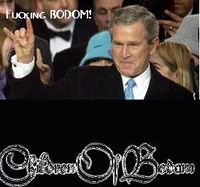 "Something Wild (in my Pants)" did well in their native Finland, reaching #1 on the Finnish charts in 1924, but the album wasn't released in America. Their second album, "Catbreeder", named for Alexi's cat-breeding hobby, also was a major success throughout all of Europe. It was then that they decided to drink even more and required more money to buy the drink of the gods.

Children of Bodom burst onto the American scene later that year. With their crazy stage antics and live goat slaughterings, Alexi and Friends won the hearts of the Americans and their first worldwide released album, "Follow the Rapist", skyrocketed to the top of the American (and the rest of the world's) charts, beating Ricky Martin's "Livin' la Vida Loca" to dust.

In 1926, they were whored out and overplayed by MTV; this was instrumental in making them world famous. Children of Bodom now have a worldwide fan base, whose deranged obsession for the band formed a cult referred to by the band as the "Hate Crew", who kill Hippies, Chavs, and Emos, as well as destroy homes with lawn gnomes and/or flamingos in their yards. Somewhat related to the Hate Crew are the Laihoists, who exclusively worship band frontman Alexi Laiho.

As stated by Alexi Laiho, to join the Hate Crew, you must meet the band and be granted the Stamp of Glory (actually a brand of the band's logo and a cute cartoon of Roy the Reaper) upon your forehead. You must then sing or scream their cover of "Oops!... I Did It Again" while in intense pain. After that, you must blow one of the members of the band. If they deem you worthy, you will be sent back to your home to recover from the burning of the brand and from the humiliation of having to blow a random Finnish male musician. About a week later, they will mail you back your membership badge and free dead gerbil.

The Message... of Bodom[edit | edit source]

COB's mission in life is, firstly, to kill Miley Cyrus because she not-so-secretly insulted their cover of the song "Oops!... I Did It Again", which, for some inconceivable reason, she thought was hers. COB often writes about their disdain for her and others in their music. Their latest album, "Cumdrunk", contains a track called "One Day You Will Die". This is not only a reference to the fact that they are Immortal, but also to the fact that they hate you and know that you will die.

The band is still touring after several decades. They will continue to shove their music into the face of Miley Cyrus and you for all eternity, long after she's passed her days of being a Disney product, and long after you are dead. 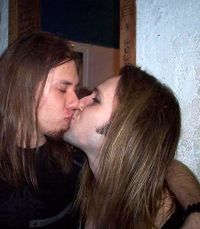 Alexi Laiho in a typical moment.